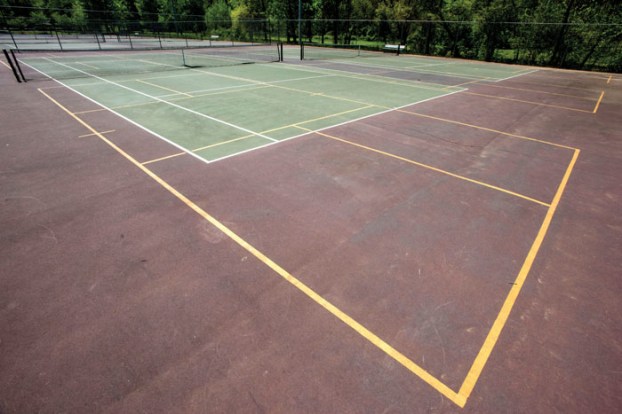 SALISBURY — A budget item on the consent agenda at the Jan. 2 City Council meeting caused tennis and pickleball players to raise concerns at Tuesday’s council meeting.

A dozen people spoke about the Salisbury Parks and Recreation Department’s plans to convert two of its six tennis courts at City Park into permanent pickleball courts. The department will spend $1,000 converting the courts, the rest of the money coming from private donors.

At the Jan. 2 meeting, the council approved about $25,000 for a budget amendment to appropriate a Parks and Recreation donation.

Many residents came to ask the city to save the tennis courts, some saying they play both tennis and pickleball but that there is still a need for tennis courts, despite those who say it is a dying sport.

Liz Tennent said she has played tennis since she was 7 and was disappointed to learn about the lack of discussion about converting the tennis courts into pickleball courts.

“When I recently learned about the plans to convert two tennis courts at City Park to permanent pickleball courts, I assumed somehow I had missed the conversation, I missed the process,” Tennent said. “Then I learned there wasn’t really a process — well, not a process that involved community input.”

She continued, “It seems like a few individuals were at the table with a money, a strategy and the ability to push this through City Council consent agenda.”

Mary James said there is already confusion about a change at the tennis courts to add pickleball lines several years ago, saying tennis players can’t figure out if the ball is in or out.

She said she was disappointed the decision in January was only on the consent agenda.

“I’m not even sure if all of you were aware of the impact of what you were voting on,” James said.

The council asked Parks and Recreation Director Nick Aceves to discuss the decision to convert the tennis courts at the next council meeting.

“For me as I listen to the pickleball and the tennis court discussion, it is about transparency and the fact there wasn’t a full discussion around the full use of those six courts,” Mayor Al Heggins said. “I would like to ask council if we could re-explore this at our next meeting.”

Other council members asked that conversion of the courts be delayed as the city works through the issue.

“I think it definitely makes sense that whatever work was planned that we put it on hold until we resolve the issue,” Councilman Brian Miller said.

City Manager Lane Bailey said the conversion has not taken place and the city would have some time as it is waiting for warmer nights to draw the lines.

Melissa Utley said the city needs to bring tennis and pickleball players together to have a discussion.

Mayor Pro Tem David Post backed his brother at the end of the council meeting, saying on Sunday there was a line to play pickleball and that is common. He asked the audience to name a current American tennis player besides the Williams sisters.

Post said he would not be at the next council meeting.

“I hope that if you have that discussion next week, you’ll listen to everyone involved,” Post said.

SALISBURY — The American Association for the Advancement of Science’s Dialogue on Science, Ethics and Religion program has awarded Hood... read more