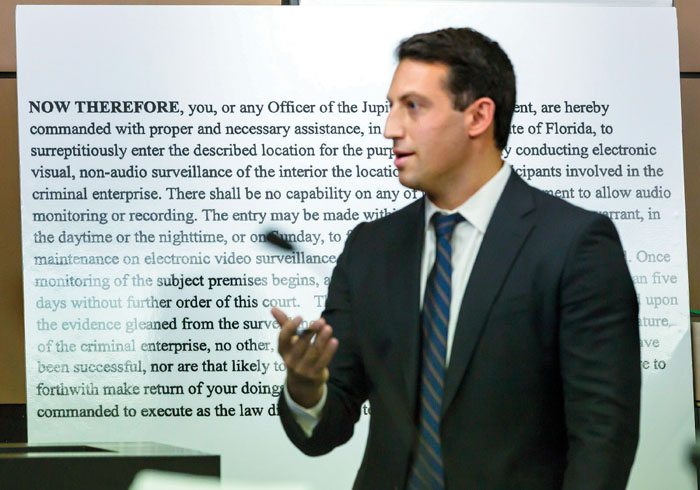 Alex Spiro, attorney for New England Patriots owner Robert Kraft, stands in front of a copy of a search warrant as he questions Jupiter Police Detective Andrew Sharp during a motion hearing in the Kraft prostitution solicitation case, Wednesday, May 1, 2019, in West Palm Beach, Fla. Kraft's attorneys argue that undercover surveillance videos allegedly showing their client paying for sex at a Jupiter day spa should be ruled inadmissible and the evidence thrown out. (Lannis Waters/Palm Beach Post via AP, Pool)

The Palm Beach County State Attorney’s Office filed a motion asking Judge Leonard Hanser to hold attorneys Alex Spiro and William Burck in contempt and throw out their questioning of Jupiter police officer Scott Kimbark. While questioning Kimbark at a court hearing last week, Spiro accused him of telling other officers he would make up a reason to stop the customer who left the Orchids of Asia Day Spa directly before Kraft in January, using an obscenity to describe what he would do.

Prosecutors say Kimbark never did that.

“There are no rationalizations, justifications, or excuses for Spiro’s and Burck’s knowing presentation of false and misleading accusations directly affecting the credibility” of Kimbark, prosecutors Judith Arco, Greg Kridos and Craig Williams wrote.

Burck told The Associated Press by phone that he and Spiro “will not be intimidated.” He said they will provide evidence supporting their claims. Burck represented former White House Counsel Don McGahn during special counsel Robert Mueller’s investigation. Spiro also represents Jay-Z, Mick Jagger and other celebrities in various matters.

Last week, Kraft’s attorneys asked the judge to throw out video recordings allegedly showing the 77-year-old owner twice paying for sex in January at Orchids of Asia. Kraft, who is worth $6 billion, is one of 25 men charged with paying between about $50 and $100 for sex. Kraft has pleaded not guilty but issued a public apology for his actions.

In court documents and proceedings, Jupiter police said that after receiving a tip from a neighboring county that Orchids of Asia might be a prostitution front, detectives placed it under surveillance in November and persuaded a judge in January to issue a warrant letting them install hidden cameras in the spa. Kraft’s attorneys accused them of lying to obtain the warrant, calling that a violation of the customers’ privacy rights.

According to testimony, if detectives monitoring the cameras saw a customer pay for sex, the suspect was tailed by Jupiter officers as he left the parking lot until he committed a traffic violation. He was then pulled over to obtain his identification so he could later be charged with solicitation. The men were not told immediately that they had been seen at Orchids of Asia. Police said they didn’t want to tip off the spa’s owner about the surveillance.

Kimbark pulled over Kraft’s chauffer after one of his visits. During questioning last week, Spiro asked Kimbark about his recorded conversation with other officers about pulling over the previous customer. Spiro four times accused Kimbark of acknowledging he didn’t have probable cause to stop the man, but would “make some … up,” using a common obscenity.

Kimbark denied saying that, as did prosecutors Tuesday. Prosecutors said to avoid telling the man that his traffic violation had occurred in the spa’s parking lot, Kimbark was recorded telling another officer that if the man asked about its location he would “come up with something.”

Prosecutors said the wording of Spiro’s question “was designed to mislead (the judge) as to the lawfulness of the traffic stop.”

Burck and Spiro filed a rebuttal late Tuesday saying Spiro “had a good faith basis” to question the officer as he did, based on what he was told by the other man’s attorney. They said prosecutors didn’t give them Kimbark’s video before the hearing as requested.

Prosecutors also accused Spiro of trying to intimidate Kimbark during a lunch break, allegedly telling the officer he had video of Kimbark saying “stupid” things.

Burck in his phone interview laughed at the accusation, saying prosecutors were present during Spiro’s conversation with Kimbark.

“If they thought it was such a terrible thing, it is interesting that they decided to raise it a week later and not right after it happened in front of the judge,” he said.

David Weinstein, a Miami-based defense attorney and former prosecutor not involved in the case, said he understands the prosecutors’ frustration with “these big-time, out-of-town lawyers,” but added “they went a little overboard by filing the motion.”

He said Judge Hanser will review the recording, but knows attorneys stretch their questions and arguments as far as they can. If Hanser finds Spiro and Burck crossed the line, he could kick them off the case, Weinstein said.

“The judge is probably really aggravated with both sides,” he said.

Rask comes up big as Boston Bruins advance to…