Ask Us: What is the progress on former pink granite gas station property?

Editor’s note: Ask Us is a weekly feature published online on Mondays. We’ll seek to answer your questions about items or trends in Rowan County. Have a question? Email it to askus@salisburypost.com.

A Post reader asked why there hasn’t been any progress at 201 E. Innes St. since the pink granite gas station, also known as Bankett Station, was torn down.

Demolition for the gas station, a 1930s edifice, was first discussed in September 2016. It was disassembled in January 2018 despite lobbying to preserve the building by the Historic Salisbury Foundation and other historical preservation efforts.

The gas station originally was going to be replaced with a three-story building, according to plans submitted to the Salisbury City Council in July. The 2018 plan included a $2.8 million budget for the three-story building. The first floor would be offices while the second and third floors would be apartments.

Designs for the property were submitted to the City Council by architect Pete Bogle, representing the Bogle Firm.

However, according to the Feb. 19 City Council minutes, Bogle indicated that the property had unsuitable soil. Though “the developer remains excited and dedicated to the project,” Bogle said.

The project still has a “green light,” but the new building will now be two stories instead of three, said Todd Dagenhart, a partner in Downtown Properties LLC. The upper floor will have apartments, and the bottom floor will be office space, he said. 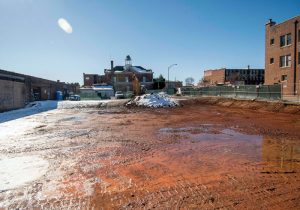 Notably, the soil “would not become a hazard,” Bogle said. Despite subprime soil conditions, he added, it is possible to create a foundation supporting a three-story building. But the developer’s budget limits the structure to two stories, he said.

Construction is expected to begin in June or July, Dagenhart said. A tentative completion date is mid- to late summer 2020.

“The project has full drawings, and the developer has obtained permits from the city and the county,” Bogle said at the February meeting. “At this time, the developer is working with banking and underwriting.”

Dagenhart said the plan has been completed and that Downtown Properties is getting new quotes for construction.

The city originally awarded $142,000 for the project as part of a Downtown Revitalization Incentive Grant when the projected budget was $2.8 million. For a two-story building, the proposed budget, which was submitted to the City Council on Feb. 19 by the Bogle Firm, is estimated at $2.2 million. Subsequently, the city reduced the incentive grant to $99,000.

Meanwhile, plans call for the granite gas station to be rebuilt at 219 E. Innes St., the site of a parking lot. The building will have the same granite facade, but new construction will allow contractors to build a larger structure, Dagenhart said.

Downtown Properties is now marketing the property and hopes to draw interest once construction has started at 201 E. Innes St., the site of the office and apartment building, and 211 E. Innes, a warehouse, he said.

Buck Hurley Triathlon draws a crowd to swim, bike and run through Salisbury for its 10th anniversary

SALISBURY — In its 10th year, the Buck Hurley Triathlon drew more than 100 participants to swim, bike and run through... read more