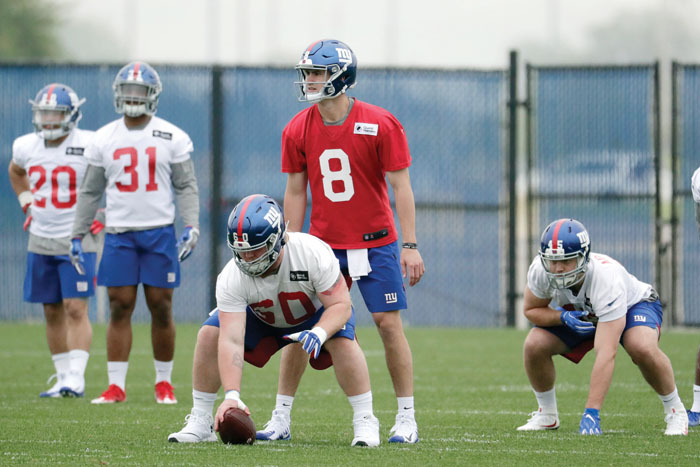 EAST RUTHERFORD, N.J. (AP) — After two days of rookie minicamp, it’s easy to see why the New York Giants drafted Daniel Jones of Duke with the No. 6 pick.

He reminds them of someone they know: Eli Manning.

Jones can throw all the passes. His focus is football. And when he talks about life in the NFL, he sounds like a coach.

Jones may be bland, but that’s the way the Giants like their players these days. Team first, everything else second.

Rock the boat and the Giants’ patience will run out — as it did with Odell Beckham Jr.

In the minicamp that ends Sunday, Jones’ throws were crisp. If there was any drawback, some tosses had a little too much heat on them.

He showed he could handle the media. He said nothing controversial and didn’t bother to see what anyone had written or said about him.

“I got up, got over here and opened up the second install,” he said. “That’s what I needed to do.”

Coming to the camp, the Giants gave Jones a portion of their playbook so they could run plays with the 76 players in attendance.

“It has been manageable, but it’s all new stuff for everyone,” Jones said. “I think it was a good amount of stuff. It’s going to be a challenge just to learn the verbiage and the way everything is called, the way everything is structured in the offense. I thought it was a good amount for the first day and we kind of got an equal amount the second.”

Jones will be given a bigger package to take home to North Carolina. The rookies and free agents are due back a week from Monday, when they will start working with the veterans.

“I’m going to try to learn as much as I possibly can,” said Jones, who also plans to throw during the week off. “It’s tough without being on the field necessarily in 11-on-11 football, but if he expects me to do it, I will make sure I do my best to do it.”

Coach Pat Shurmur has been pleased with what he has seen, although the 21-year-old is going to have to make adjustments.

While the fundamentals are relatively the same, New York has its quarterbacks under center much more than Duke did. The Giants also have different drop backs that will cause Jones to adjust some of his footwork, the coach said.

Jones brings a new element to the position — his ability to move in the pocket. The 38-year-old Manning has rarely scrambled since taking over as the Giants quarterback in 2004.

Since the draft, Shurmur said Manning has had no response to the Giants taking an heir apparent.

“I have never been around a person that can stay in the moment better than Eli,” Shurmur said. “That is something that is really unique about him. He is staying in the moment and training to have a terrific season. He looks really good out here throwing, moving and doing all the things necessary.”

NOTES: S Jacob Thieneman and LB Nate Harvey sustained knee injuries that may require surgery, Shurmur said. He said they were hurt in non-contact drills. … Jones was intercepted in Saturday afternoon’s practice by free agent cornerback McKinley Whitfield of Tulsa. The pass was initially tipped by cornerback DeAndre Baker, the Giants’ third pick in the first round.