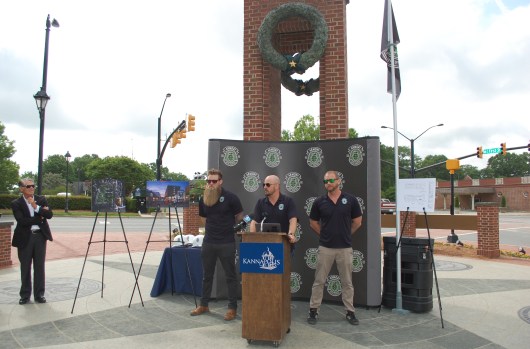 Kyle Lingafelt announce the plans for Armory Beer Company, the first business to come as a part of downtown Kannapolis revitalization, as Stefan Perrine and Richard Bradley stand next to him on Friday at Veterans Park. 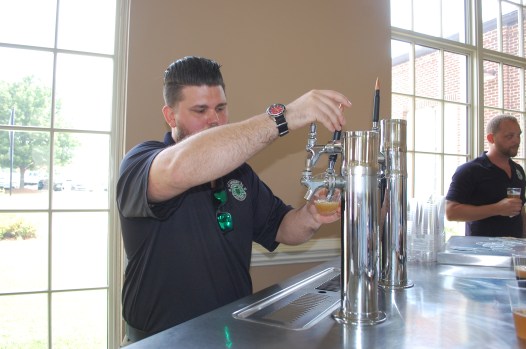 Josh Woodward pours a Blue Falcon, a Belgium Triple, at the Kannapolis Train Station after the announcement the Armory Beer Company will be the first business for the revilitalization of downtown Kannapolis. The brewery will be owned and operated fully by veterans. 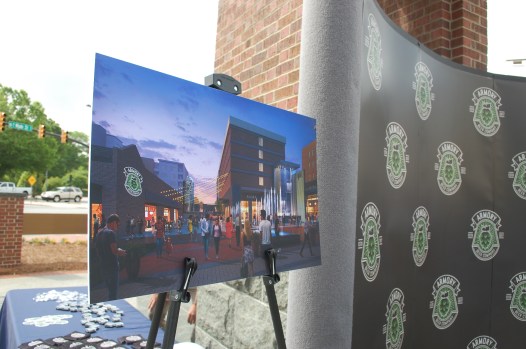 A rendering of Armory Beer Company was on display.

KANNAPOLIS — It’s a homecoming for Kyle Lingafelt, along with a new beginning for downtown Kannapolis.

The city announced Friday at Veterans Park that Armory Beer Co. will be the first business to open as part of a downtown revitalization project. The brewery is led by three veterans — Lingafelt, brewmaster Stefan Perrine and Richard Bradley. It will open in September.

“We’re real excited to share our vision, and it all came to fruition,” Lingafelt said. “History is being made in Kannapolis, Cabarrus County and the Charlotte region.”

Kent Gregory, a manager with Lansing Melbourne Group, is leading the revitalization, known as VIDA. The $60 million private investment will bring 286 apartments, a hotel, retail space and restaurants, as well as the brewery.

“He made us a big promise that he was going to bring places to eat and places to drink, and he’s already made a complete on one of those ideas,” Kannapolis Mayor Darrell Hinnant said.

Gregory said Armory Beer is a great fit for the development.

“We couldn’t have a better first tenant,” Gregory said.

Lingafelt said the brewery will be a perfect fit for the community he grew up in.

“What better way than a business based on veterans and craft beer,” he said. “Having grown up in Cabarrus County, it’s great to come back and see all the amazing things being done, and it’s great to be home.”

After the announcement, city and county leaders, business leaders and friends of the brewery founders walked to the Kannapolis Train Station to enjoy one of Armory’s beers. They had a choice of Oh Dark Thirty, a double vanilla stout, or Blue Falcon, a Belgian triple that is sweet upfront with a high 9 percent alcohol by volume.

Lingafelt said although most of Armory’s beers have a high alcohol volume, it serves some with lower alcohol levels as well as nonalcoholic options. They all will have military-inspired names, and some proceeds will go to support military charities.

The brewery will be on West Avenue in the former Rotary Building. It will accommodate 150 to 200 people and maybe more for concerts, Perrine said. There will also be several beer gardens outside to allow for food trucks.

Lingafelt said he wanted to return home to North Carolina. He, Perrine and Bradley met at the University of Southern California while pursuing their master’s in business administration degrees.

“Now that we’re home, we have a new mission, a mission to make our home a better place,” Lingafelt said. “Now we’ll still be fighting. But don’t be concerned, we’ll still be fighting to build our community, fighting to create jobs within the community, fighting not only to find a place for friends and families to enjoy themselves but to provide a clean, safe, beautiful atmosphere to reminisce to create your own memories and own stories.”

Gregory said Armory Beer is a great opportunity for those who have served their country to re-enter the workforce.

“What they’re trying to do is the transition of taking vets and getting them back into the workforce,” Gregory said. “Their objective is to hire 20 to 25 people who have been over there and have paid the price for us. This would give them a position back in society. That’s a great cause.”