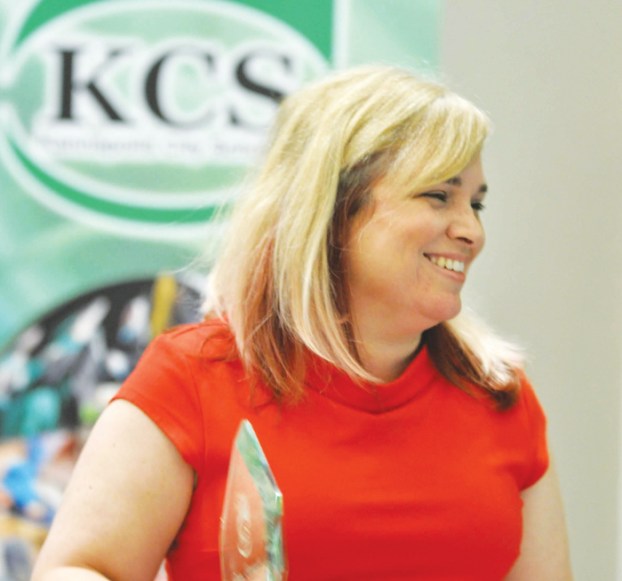 Evelyn Carrasquillo as she receives her award, the second of all Kannapolis City School Teachers of the Year.

KANNAPOLIS — Addressing the 2019 Kannapolis City Schools Awards breakfast on Wednesday, Superintendent Dr. Chip Buckwell said the event was one of his favorites throughout the  year.

“It gives us all a glimpse at the amazing educators we have in our system,” he said.

Amazing proved a fitting adjective for this year’s nominees, one each from the system’s eight schools. Introduced by their respective principals, the new crop boasted backgrounds of innovation, drive and dedication.

But one rose above the rest: Evelyn Carrasquillo, a math teacher at A.L. Brown High School, was named this year’s teacher of the year.

Todd Parker, principal of A.L Brown, said Carrasquillo was a leader in curriculum and instruction and among several school-wide and district-wide committees.

“While she is a great teacher, it’s really her humor that connects her with both students and staff,” he said. “The kids love her personality as well as her teaching style. She’s an amazing educator and truly a very good friend of mine.”

According to district staff, Evelyn Carrasquillo’s journey to the classroom began unconventionally. A student of chemistry, she began working as a forensic scientist intern in the Miami-Dade, Florida, crime lab.

But then her sister needed a tutor.

“[My sister] kept telling me that when I helped her, she would understand the material and that she wished I was her teacher,” Carrasquillo said. “This made me rethink my career choice and ignited my passion for helping kids.”

Carrasquillo went on to receive her teaching certification Florida Atlantic University and entered the classroom in Florida in 2001. She moved to Cabarrus County in 2007 and taught at J.N. Fries Middle School before joining A.L. Brown in 2010.

As chairperson of the A.L. Brown’s math department, Carrasquillo said her greatest accomplishment was “helping students find their self-confidence in math.”

“They come in the first day of school saying they never understand math or have never been good at math,” she said. “I tell them, ‘This year will be different.’ My biggest reward is giving them the confidence to know they can do something they thought they couldn’t.”

Carrasquillo’s also shares a special bond with many A.L. Brown families and students — coming from a family of Cuban immigrants, she speaks fluent Spanish and works to keep Spanish-speaking families engaged in their children’s learning.

To maintain this engagement, she sends weekly texts to all parents and students, making phone calls or sending emails where needed.

“I can honestly say that I have never had a teacher in high school who communicated more than Mrs. Carrasquillo,” said parent Caroline Fongemy. “She recognizes that parents need to be active participants in education. She believes it takes a village, and her actions as a teacher show this.”

Buckwell said that Carrasquillo was the kind of teacher every student needs.

“Mrs. Carrasquillo is a true champion for kids,” he said. “She meets all of them where they are and takes them to heights they never thought they could reach.”

Receiving her reward, Carrasquillo said she was overwhelmed, yet blessed and honored.

“I was honored,” she said when asked about being named Teacher of the Year. “I had been nominated before, but I’m kind of quiet so I was shocked that I won. But like I always said, there’s no place I’d rather be. There’s nothing else I’d rather do. I hope I can make everybody proud.”

Nichole Morgan of Fred L. Wilson Elementary was named the system’s runner-up Teacher of the Year. She received $500 from Mark III Employee Benefits. The remaining nominees received $100 from Mark III, and include:

SALISBURY — With all 50 N.C. senators present Tuesday, supporters of the Born-Alive Abortion Survivors Protection Act scraped together a... read more