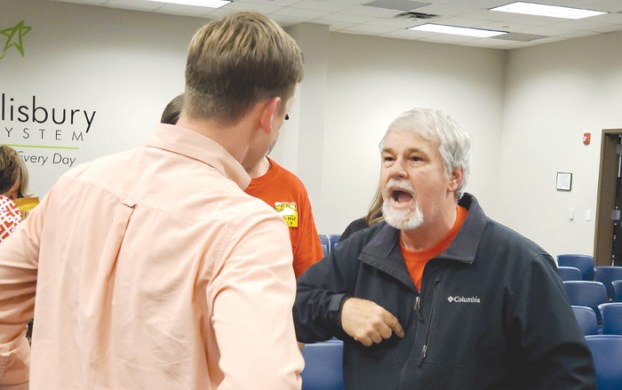 Faith Alderman Randall Barger, an opponent to the town's elementary school closure, speaks to former school board Chairman Josh Wagner in March 2019 following a meeting in which the board scheduled public hearings for the closure of Faith and Enochville elementary schools. Salisbury Post file photo

So, where are we now?

Three weeks ago, the Rowan-Salisbury School Board put off the closure of Faith and Enochville elementary schools because, as Chairman Josh Wagner said, there was “new information” communicated in closed-door meetings with select members of the school board and county commissioners. Wagner said during a school board meeting that there may be some additional funding available for RSS. Then, Commissioners Chairman Greg Edds said in the same meeting that revaluation wasn’t as good as hoped.

It remains a bit fuzzy as to how that information canceled plans that had been hastily pushed by Wagner with the argument that tough decisions must be made.

In the weeks since, however, we’ve received a bit more encouraging news on revaluation — a process that occurs every four years in Rowan.

If tax rates stay the same, county revenue will increase by 7% instead of 5%. More importantly, we’ve seen the most significant job announcement in Rowan County’s history — at least 1,200 jobs from Chewy.com, an online pet product retailer that plans to build a fulfillment center on Long Ferry Road. That a big economic development announcement could be coming may have been communicated in private meetings between school board members and commissioners, too.

Both items are positive developments for Rowan County and, as a result, the school system. Just four years ago, for example, property tax values remained flat or decreased on average after the 2015 revaluation. And the addition of 1,200 jobs will be good for the pocketbooks of locals or commuters from adjacent communities who move up from lower-paying jobs. Sales tax revenue may quickly increase, too.

But neither of those items place RSS in a notably different place than just a few weeks ago. The system is still under capacity. It’s also unclear whether we’ll see any large changes in yearly school allocations before the 2021 or 2022 fiscal years, when RSS  already planned to fill an upcoming opening for debt capacity.

Will the Chewy fulfillment center attract new Rowan County residents with school-age children? Possibly. But the degree to which that occurs, or if it happens at all, is unclear. For that reason, neither county commissioners nor school board members should make commitments relying on potential changes in enrollment.

Families may choose enroll their children in RSS as a result of the success of its “renewal” designation. But that is a guessing game with uncertain results, as renewal starts next school year. Nothing that’s occurred in recent weeks has made that possibility any more likely.

And remember, the number of open elementary seats is enough to fill 5.5 average-sized schools.

A more realistic proposition is to lobby for increased funding from Rowan County commissioners. The county will have capacity to provide additional funding to the school system. Will that additional funding be enough to provide a new menu of options from which school board members can choose to address the number of open seats? Probably not.

In the next couple months, County Manager Aaron Church will likely present a fiscal year 2020 budget with a revenue-neutral tax rate. This year, revenue neutral likely means a decrease in the actual tax rate.

Commissioners could opt to keep the same rate or adopt a rate that’s greater than revenue neutral, but Rowan County residents aren’t keen on increased tax bills. And it seems likely there’s at least three commissioners who would lend a sympathetic ear to arguments about keeping a revenue-neutral rate.

Meanwhile, Rowan County will not realize the full benefits of Chewy.com’s fulfillment center until a 10-year incentive agreement ends. So, while Chewy plans to invest $55 million into its new facility, total tax generated on that will be tens of thousands of dollars until the late 2020s rather than hundreds of thousands.

Three weeks from the sudden end of a controversial proposal, the Rowan-Salisbury School Board is in a slightly better position. Unless there’s more “new information” on the way, however, the same tough decisions are waiting for a vote.

By Sharon Randall This is an Easter story. I’ve told parts of it before. But sometimes, to tell a new... read more