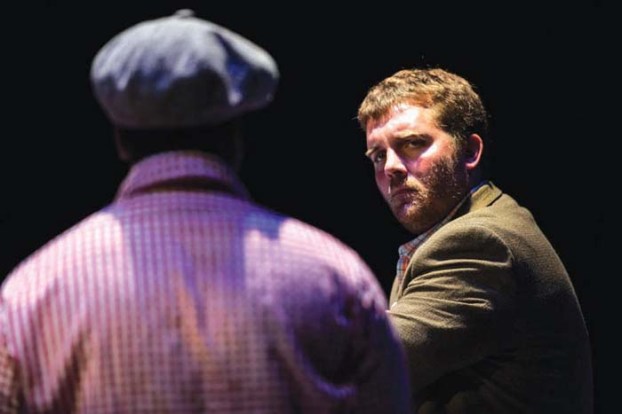 You’ll cry at the gross injustice, at man’s inhumanity to man, and you will be appalled by a 49-year-old murder that took place in Oxford, North Carolina.

Catawba College graduate Mike Wiley wrote the play based on the nonfiction book by Tim Tyson. That book was a bestseller because Tyson was there, in Oxford, when Dickie Marrow was brutally murdered and much of the town was destroyed by arson. Tyson’s own father, Vernon, a Methodist minister, was run out of town because of his preaching that all races are equal.

Director Craig Kolkebeck has created a cohesive feeling of unease and simmering anger in the production. Rod Oden, the technical director and new executive director of Lee Street, has designed a perfect setting.

Kolkebeck also designed the sound, which ranges from songs of the 1970s to original blues by Bob Paolino, who also plays one of the most despicable men in the play.

Everyone on stage has a moment. Ed Whitney, who was terrifyingly menacing in ”To Kill a Mockingbird” a few years ago, is a determined, confused and somewhat angry Tim Tyson, who has come back to Oxford to get the real story. He knows, he knew even as a child, that the trial for Marrow’s killers was a sham, and now he’s determined to reveal the truth.

Matt Monte plays Vernon Tyson, Tim’s minister father, in a kind and understated way. Vernon was no rabble rouser, he was a man talking about freedom and equality.

Having Paolino and veteran actor Kurt Corriher on the same stage is powerful. Paolino plays Robert Teel, a mean, angry racist who gives the order to kill Marrow. He’s frightening.

Corriher plays a number of roles, as do most in the cast. His chief role is Thad, a good friend to Vernon Tyson and a quiet supporter of change. He also plays a man who will be key at the trial. Corriher’s strength is his commitment to the various roles.

Michael Connor is so strong as activist Golden Frinks, he might make an audience stand up and shout amen to his impassioned speeches.

Alex Thompson plays the doomed Marrow, a Vietnam veteran, a husband and a father. An off-the-cuff remark earns him his death sentence and creates a web of incredible lies. Thompson is likable, charming, sincere.

Mason Livers, a Catawba College theater major, has power in his voice and his movement, in his expressive face, in the tension in his body. He often acts as narrator and plays Marrow’s cousin. He is the voice of the angry black population in Oxford, outraged by the vicious killing.

Tim Campbell, perhaps best known for comedic roles, plays six roles, ranging from racist Larry Teel, the old man’s son who starts the violence that ends in Marrow’s death. He’s also the mayor of Oxford, trying to find a solution to the anger boiling in his town.

Sara Lee, another Lee Street veteran, is Martha Tyson, Tim’s mother, and Judy Teel, the wife who thinks she hears Marrow “talk dirty” to her. Quite the dichotomy of roles.

Others in the cast are Raquel Oden, who must play a racist in one of her roles, Kim Avery and Hadassah McGill.

In the play, the black cast members represent the black men and women of Oxford, from sweet Rosanna, who helps care for the Tyson boys, to grandmother Patty, to activists, to grieving widows. The men are light-hearted, then resolute, then angry. But some have been angry before, tired of waiting more than 100 years for change that does not come.

This play is a true story, an important point in history and an opportunity to have conversations about racism and ignorance. The themes are definitely adult, as is some of the language.

But this play is one you should see, even if you are offended, because the issues in it have not gone away. Indeed, racism is again rearing its ugly head, not just in the South, but all over the world.

Lee Street took a risk producing this, but what has been created is vitally important.