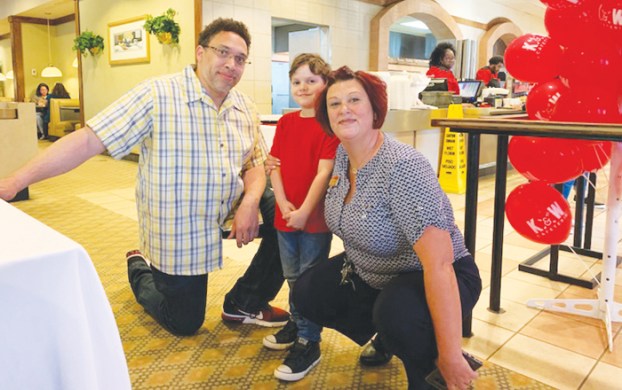 SALISBURY — Hard work and dedication have led to big rewards for local students thanks to a partnership between K&W Cafeterias and the Paul L. Dunbar Group.

Dunbar, responsible for a growing number of after-school programs known as 21st Century Community Learning Centers at area elementary schools, are recognizing students of the month at each 21st Century site with an evening of celebration and recognition at the local restaurant.

The learning centers offer care and instruction at the school from 2:30 to 6 p.m. That includes periods of recess, homework help, tutoring and a K&W catered meal — all free of charge.

Students of the month with the program are selected based on marked academic strides or a dedication to completing coursework. The resulting celebrations feature community guests, educators and a free meal for the selected student and his or her family

Hunter Foutz, a second-grader at Essie Mae Kiser Foxx Charter School, was the first to receive the special treat, which included  balloons, loudspeaker recognition and congratulations from special guests and restaurant patrons.

Hunter’s mother, Jamie Foutz, said her young learner “thought he was the man of the hour.”

“My son felt very appreciated,” said Jamie Foutz. “He does work hard, and for them to appreciate him means a lot.”

Community guests included Officer Rebecca Sexton with the Salisbury Police Department. Jamie Foutz said the chance to talk to Sexton had been very inspiring to young Hunter, who currently dreams of a career in law enforcement.

According to learning center facilitator James Davis, the shared meal offers a chance to “recognize students in a bigger way.” It came through an evolving relationship with K&W Cafeterias, which began providing catering for the after-school program in February.

“My thought pattern from Day 1 has been to offer extra recognition that goes further than a coupon,” Wells said.

The restaurant-based celebration of success also provided chance to recognize parents alongside their student, she said.

“Too often as a society, we fall short in recognizing the parents for keeping their kids on the right track,” she said.

Though only one celebration has been held, Davis said the new reward is achieving another goal: it’s helping students challenge each other.

“Sometimes the greatest motivation students can get doesn’t come from us, it comes from each other,”  he said. “Hunter is already telling other students he’s going t0 win student of the year. He’s started the challenge already.”

SALISBURY — Chewy, an online retailer of pet food and other pet products, will bring a fulfillment center to Rowan... read more