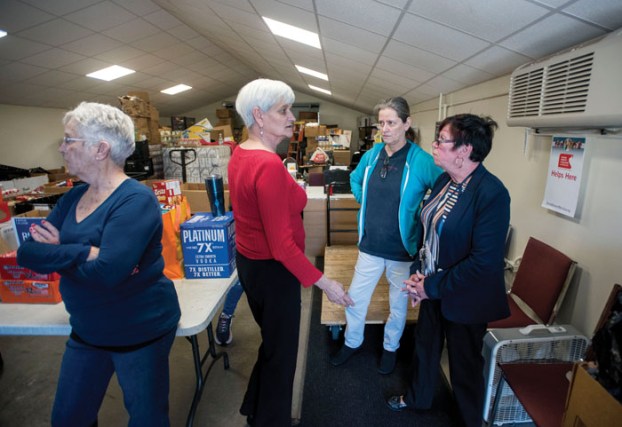 Yvonne Barger, Phyllis Treece, Margaret Walls and Marsha Washam talk about their next project. Members of the Rockwell AMVETS Post 845 and the Ladies Auxiliary competed against each other to raise food donations for nearby food pantry at Freedom Christian Worship Center. Jon C. Lakey/Salisbury Post

Rockwell AMVETS, auxiliary go to the wire for food pantry

In the 11th hour — really, close to the 9 p.m. Sunday deadline — Benton brought more than 100 food items to Rockwell AMVETS Post 845 and said count them up for the men.

Phyllis Treece, a member of the AMVETS Post Ladies Auxiliary, was serving as the official counter for this monthlong food drive, which had become a competition between the auxiliary and the AMVETS men.

She couldn’t believe the tally after she counted Benton’s contribution.

It was a hard pill to swallow for the women, and especially Treece, who knew she had 56 more food items out in her truck. But by counting Benton’s stuff, she had run past the deadline, and she couldn’t bring herself to break the rules.

Altogether, the AMVETS post and its auxiliary collected 1,500 food items that they delivered Wednesday to the food pantry of Freedom Christian Worship Center on China Grove Highway.

Freedom Christian’s food pantry sits about two football fields away from the AMVETS post on the opposite side of the road. It’s open from 8:30 a.m. to noon every Wednesday, and the auxiliary maintains a box at the AMVETS post that collects food for the pantry year-round.

“This is one of the projects we do continually,” auxiliary President Yvonne Barger said.

But this food drive was a much bigger deal. When it didn’t exactly get off to a roaring start in March, Tracy Seeley had the big idea to make it a competition between the men and women.

Seeley told the auxiliary’s  community service chairman, Pat Vanhoy, who ran with the notion — and it was game on.

The tallies went back and forth for a while, with the women ahead one day and the men the next, but eventually the women seemed to have a comfortable lead.

Reflecting Wednesday on their narrow loss, the women agreed they maybe took their victory for granted.

“We thought we were way ahead,” Treece said.

“We got slack,” Marsha Washam chimed in.

But the auxiliary members weren’t really smarting, or complaining.

“You might want to say the food bank won,” Seeley said. “This is a fabulous (group) of people, and they do so much.”

During the morning, before AMVETS delivered its food drive contributions, the Freedom Christian Worship Center food pantry had served 66 families.

“It’s different every week,” said manager Jerry Menster, who supervises the operation with his chief assistant, Pat Flannery. They sometimes see up to 100 families on the busier Wednesday mornings. Those receiving food are allowed to return every other week.

“We appreciate it so much,” Menster said of the AMVETS’ donation. “This is really good what they did today. The men won, but we say we won.”

The food pantry has been operating about eight years. The bulk of its supplies come from Harvest Food in Charlotte. The church pays $300 for a truckload every two months.

F&M Bank recently paid for a remodeling of the building, and the improvements included new insulation, wallboard and LED lighting.

AMVETS, which is also known as American Veterans, is a congressionally chartered veterans service organization founded in 1944. It represents the interests of 20 million veterans and their families and has more than 250,000 members nationwide.

Membership in AMVETS is open to anyone who honorably served or is currently serving in the U.S. armed forces, including the National Guard and Reserves.

The Rockwell AMVETS Post 845 and its auxiliary stay busy in the community.

Members collect clothes for kids and veterans. Once a month, they sponsor bingo (with cash prizes) at Hefner VA Medical Center. Over Easter, the auxiliary makes up 200 baskets for children and offers a chance to meet and have photos taken with the Easter bunny at the gazebo in Rockwell.

At Halloween, the post provides candy for 400 to 500 trick-or-treaters. The post gives out two $500 college scholarships each year. Members participate in the Faith Fourth of July parade and the Veterans Day parade at the VA Medical Center.

The post and its auxiliary help lay Christmas wreaths at the markers in the Salisbury National Cemetery’s two locations. They also clean markers at the National Cemetery and sponsor an angel tree at Christmas.

A golf tournament is planned in September to raise money, and the Rockwell AMVETS and auxiliary raise money for Saving Grace canines, which provide help for veterans with post-traumatic stress disorder.

Whenever the post has an event, it’s to raise money for all its community projects or to help veterans.

Seeley said maybe the next AMVETS in-house competition for the food pantry will try to collect household supplies and pet food.

“Probably the next time it will be even better,” Treece added. “We’ll be sneaky next time, too.”

GRANITE QUARRY — LGI Homes, which is developing the Village at Granite off Faith Road, has agreed to put up... read more