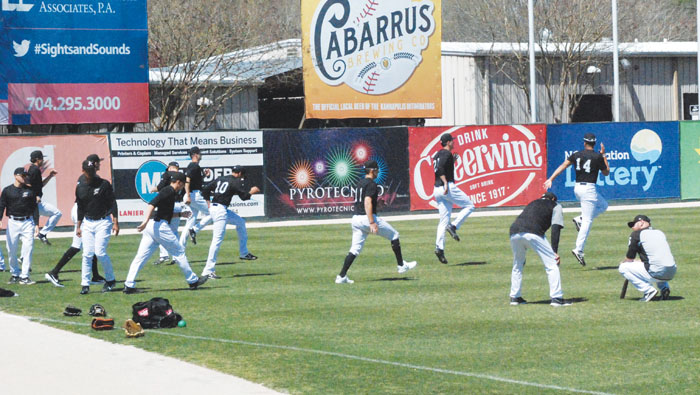 Dennis Davidson/Salisbury Post ... Members of the Kannapolis Intimidators loosen up before a practice on Wednesday afternoon, in preparation for tonight’s season and home opener against the Rome Braves at 7:00.

KANNAPOLIS — The Kannapolis Intimidators open their season tonight at home, hosting the Rome Braves at 7:00.

This season will be team’s final one at Intimidators Stadium supported by Atrium Health, as the club will move into a new downtown stadium in 2020, with a new nickname. The organization will announce its new name after this season.

But before the move, the Intimidators have 70 home games of South Atlantic League (Class A) baseball, in addition to special promotions connected to almost every contest.

The Intimidators will have its most elaborate schedule of post-game fireworks shows in team history. As a brand-new element for the 2019 season, each of the 16 fireworks displays will feature a musical soundtrack set to inspiring themes.

Following tonight’s game, the fireworks extravaganza will pay homage to “Local Legends” such as James Taylor, the Avett Brothers and Kannapolis’ own, George Clinton.

Kannapolis, an affiliate of the Chicago White Sox, introduced new manager Ryan Newman on Wednesday during its annual media day.

Newman, 40, a California native who had a brief minor league career in the Pittsburgh Pirates’ organization, got into coaching early on. At 29, Newman managed the Detroit Tigers’ team in the New York-Penn League.

The next year, in 2009, Newman joined the White Sox organization and with Kannapolis, has worked at every level of Chicago’s affiliates. Newman has managed in Bristol (rookie), Great Falls (rookie), Winston-Salem (A) and Birmingham (AA). He also spent 2014-15 as a coach with the Charlotte Knights (AAA).

“We’re all excited,” said Newman. “We’re ready to get the lights on and hear that umpire say ‘play ball.’ Let’s get the season rolling.”

Newman is well aware of the history and legacy of the current stadium, which opened in 1995, and nickname — Intimidators was adopted in 2001.

“It’s pretty awesome to manage the last year here,” Newman said. “I played in this ballpark when I was in the Sally League and to be able to be here and manage during the last season of the park is exciting. I’m glad to be able to help with the transition to the new ballpark and there’s a lot of exciting things going on for the city of Kannapolis — and to be a part of it is an honor.”

Newman added that he hopes that his experience at other levels of minor league baseball can bring some energy to his team.

“We’ve got a really young group, but a talented group,” continued the new skipper. “It’s going to be a lot of fun. It’s been a while since I’ve been at this level, but these kids are eager to learn and they worked their tail off during spring training. We plan to compete every night and give ourselves a chance to win.”

Newman is the son of Jeff Newman, who had a nine-year major league career with the Oakland Athletics and Boston Red Sox in 1976-1984.

The new Kannapolis manager laughed when asked about his name, as there is a well-known NASCAR driver that has the same name and who would be recognizable to any race fan.

“I’ve heard that a lot,” the Intimidators’ Ryan Newman chuckled. “Especially when I managed in Bristol. I got it non-stop there. Every time I would pay with my debit card, people would kind of do a double-take to see. No, I don’t drive race cars, but I wouldn’t mind changing paychecks with him, if he wanted to do that.”