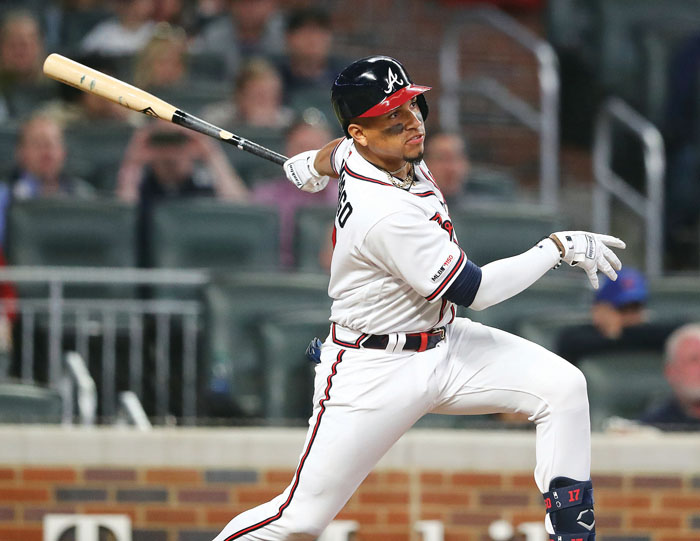 Atlanta Braves' Johan Camargo watches a three-run double against the Chicago Cubs during the eighth inning of a baseball game Wednesday, April 3, 2019, in Atlanta. (Curtis Compton/Atlanta Journal-Constitution via AP)

Willson Contreras gave Chicago the lead with a long, two-run homer in the sixth. But the Cubs’ much-criticized bullpen went wild in the eighth and blew a 4-2 lead — it was Chicago’s third blown save this season and third loss by a relief pitcher in five games.

Luke Jackson (1-0) pitched a scoreless eighth for Atlanta. Arodys Vizcaino walked Anthony Rizzo with one out in the ninth before striking out Javier Baez and Kyle Schwarber for his first save.

Contreras connected off Jonny Venters, giving the Cubs a 3-2 lead. The ball traveled 452 feet, according to Statcast, before landing on the second tier of landscaping behind the centerfield wall.

Braves starter Julio Teheran allowed one run on six hits and three walks in five innings and left with a 2-1 lead. Venters didn’t record an out before blowing the lead. Venters walked Schwarber before Contreras delivered the go-ahead homer.

The Cubs, who committed six errors in an 8-0 loss to the Braves on Monday night, had another poor game on defense. Albies led off the game with a single up the middle that bounced past Jason Heyward in center field for a two-base error. Lester pitched around the error.

Lester reached base three times, on a second-inning single that drove in Contreras and two walks.

Braves RHP Mike Foltynewicz (right elbow spur) will make a rehab start with Triple-A Gwinnett on Thursday. Foltynewicz, a 2018 All-Star, was projected to open the season as Atlanta’s No. 1 starter before having the elbow soreness. … LHP A.J. Minter (left shoulder inflammation) is expected to come off the 10-day disabled list on Thursday following a successful side session on Tuesday. Minter could share saves chances with Arodys Vizcaino.

Cubs: RHP Yu Darvish will be closely watched in Thursday night’s final game of the series. Darvish walked a career-high seven batters while allowing three runs in only 2 2/3 innings in an 8-6 loss at Texas in his first start of the season on Saturday.

Braves: LHP Max Fried will make his first start of the season as he tries to show he belongs in the rotation. He has pitched 1 2/3 scoreless innings in relief this season.