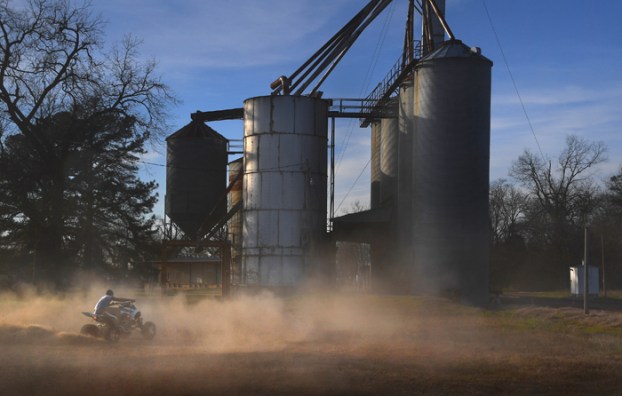 Mike Rogers spins doughnuts on his four-wheeler in an empty lot next to a shuttered grain operation in Marianna, Ark. Michael S. Williamson/Washington Post

MARIANNA, Ark. — At the center of Court Square in this old Mississippi Delta town, the monument to the county’s Confederate dead is inscribed: “No braver bled for a brighter land. No brighter land had a cause so grand.”

It has been a long time since Marianna or surrounding Lee County could be described as bright. Near the square, a storefront funeral home sits empty, along with two former drugstores, a department store, a jeweler, a barber. Gone, too, is Ronny’s dollar store, which let customers buy clothes on layaway.

The National Guard Armory closed and became a senior center, until that also closed.

This community — scarce on jobs and among the poorest in a poor state — provides an early reality check on how hard it is to carry out President Donald Trump’s vision of a social safety net that requires most able-bodied people to work, or try to work, in exchange for government health benefits.

Nearly 10 months ago, Arkansas became the first state in the nation to impose work requirements on the part of Medicaid that expanded under the Affordable Care Act. Seven other states have the Trump administration’s blessing to begin the same idea soon, and seven more are waiting in line.

The president and Republican governors contend that this abrupt turn in Medicaid, one of the most enduring legacies of the Great Society of the 1960s, will propel poor people to economic self-reliance.

In Arkansas, however, 18,000 people so far have had their insurance cut off, including 85 here in Lee County, state figures show. The view from this Delta town is that confusion about the program is rampant, and people scoff at the idea that jobs are waiting for those willing to work.

“I am a big fan of work and people working,” said Rep. Reginald Murdock, a Democrat and veteran state legislator from Marianna. But with jobs so scarce here, even at a time of low unemployment statewide, “threatening people with their insurance wasn’t a proper way to do it.”

Last week, a federal judge put a pause on the work requirement, ruling that it undermines the program’s mission of providing health care for the needy. U.S. District Judge James E. Boasberg in Washington blocked work requirements for low-income people in both Arkansas and Kentucky.

Boasberg sent the federal Health and Human Services Department back to the drawing board. But he stopped short of deciding the central question of whether a work requirement is incompatible with Medicaid, a federal-state program that traditionally allows states broad leeway to set benefits and eligibility.

Boasberg delayed the imposition of a work requirement last summer in Kentucky, ruling that Trump’s health aides had inadequately considered the effects on people needing insurance.

Arkansas Gov. Asa Hutchinson, a Republican, and U.S. Health and Human Services Secretary Alex Azar suggest that the program is helping people become more independent, contending that most of the people who lost benefits have found steady work. But the state lacks data so far to back that up.

“What the state is doing is kicking tens of thousands of people off health care, under the guise of an experiment that they aren’t even collecting any data about, let alone analyzing it,” said Kevin De Liban, a Legal Aid lawyer in northeast Arkansas active in the federal lawsuit against the program.

Some of the people who lost their health coverage had failed for three months to perform the required 80 hours per month at a job or other “community engagement” activities, monthly state reports show. But more failed to correctly report that they were following the rules.

For now, the evidence is sketchy that the work requirements are motivating people to find jobs with pay and benefits to wean them off public insurance.

From the program’s start last June through last week, more than 11,000 people on Arkansas Works, as the expanded Medicaid program is known, got new jobs, according to state figures. The state does not know, though, whether these jobs went to people cycling in and out of work — common in poor, job-scarce areas — or whether the requirements motivated people to find work.

Nor does the data show whether these new jobs came with better wages or health benefits. Evidence is scanty, too, of whether the requirements are leading people to get help in training or searching for a job.

The number of recipients submitting monthly reports is small. Last month, just 88 Arkansans in the program reported taking part in education and training, while 155 reported getting state help with a job search. According to state workforce figures, just four people have sought such help in Lee County.

Cindy Gillespie, director of Arkansas’s Department of Human Services, acknowledged that as the nation’s first such program, Arkansas Works will need fine-tuning. The state is preparing to contract for two evaluations in the next few months.

Already, though, it is clear that some are being harmed.

Elizabeth Cloinger, 47, who lives in a trailer next to her cousin’s house just outside town, thought she was complying with the new rules. She has been on Medicaid for years and already had a job, working seven days most weeks as a home health aide. Her wages — $9.25 an hour, with 50 cents more for hospice patients — and her hours met the new rules. Yet she received a June letter saying she needed to verify that her income made her eligible or she would be cut off.

She called the listed phone number and faxed information to a state employee in Pine Bluff. She was told that, like many people, she was exempt from the work requirements — in her case, because she was caring for her 20-year-old daughter recovering from a car accident and her 3-year-old granddaughter.

But on Aug. 18, she received another letter, saying she had been terminated because she had not verified her income. In December, four letters arrived saying she needed to update her email address, then 11 more in January. Each letter told her to create an online account. She doesn’t have a computer and didn’t realize that the program requires everyone to get an email address.

Last winter, she applied to get her insurance back and is still waiting for an answer. In all these months, she hasn’t seen a doctor for swelling in her right foot, which makes it hard to stand. Nor has she addressed the throbbing around the scar from her hysterectomy two years ago.

“I won’t go” to the doctor, she said, having just finally paid off, in $10 monthly installments, a hospital bill for X-rays she needed for a torn tendon before she got on Medicaid.

“I am just putting it in God’s hands,” Cloinger said. “He is going to let me stay on this Earth to see my grandbaby be raised.”

The kind of life on the edge that she leads is common here in Marianna, which has essentially been on a long slide ever since it grew up along the L’Anguille River, a Mississippi tributary, as a regional shipping hub. This early spring, the river is swollen from winter rains.

The town’s population, 4,115, is lower than a century ago. Of Arkansas’ 75 counties, Lee ranks 73rd in life quality, according to the national County Health Rankings project. Computers are so scarce that even the public library has a sign out front saying it does “not offer the Internet” — a special problem for those dealing with the work requirement, since they were not allowed to phone in their monthly reports in the first several months.

For now, what is clear is that some people on Arkansas Works are confused — because of both a lack of understanding about what rules apply to them and contradictory information from the state.

Last summer, a month before the first people were cut from Arkansas Works, Murdock, the legislator, and leaders from a historic health clinic teamed up to plan a workshop about the new requirements. They handed out fliers at barbershops and public-housing complexes, ran radio ads, and got a donation of finger sandwiches for the 150 people, at least, they expected to show up. They set the time for the hour between when those with jobs got off work and when many went to church on Wednesday night.

Yet when the evening arrived, only one family showed up — and they came mistakenly thinking they might get help finding work.

Melissa Buford, who helps people sign up for insurance and does community health work, thinks people didn’t understand that the rules apply to them. Murdock kept trying to spread the word at churches and barbershops.

Buford got a kiosk put inside the clinic to help people do their monthly reporting in a county where just 45 percent of homes have internet access. Of the patients she offered to help, one man took her up on it. In such a poor Delta town, she now believes, “to make job search a requirement, that is just wrong, because the jobs are not here.”

Even her 31-year-old daughter, Conisha Gatewood, got caught in the confusion. Gatewood was a clinic patient until she was referred to an obstetrician-gynecologist for nonstop menstrual bleeding caused by ovarian cysts. But when she arrived for a September checkup, she was told she no longer had insurance.

She thought she had done everything right, creating a password and an online account. The state had used an automated system to fill in her child-care job and work hours. A letter from the state confirmed that, she thought, telling her she did not need to search for a job because she already had one.

But then another letter came, telling her she needed to do a job search after all.

“I was so confused,” she said. “I already had a job. No one could tell me what I needed to do.”

By the time she was cut off, she had found a better-paying position, selling cellphones inside a Walmart. In January, she reapplied to Arkansas Works — and was rejected because her December phone sales, high for the holidays, put her just over the income limit. She has stopped filling prescriptions, including one for the birth-control pills that correct her bleeding.