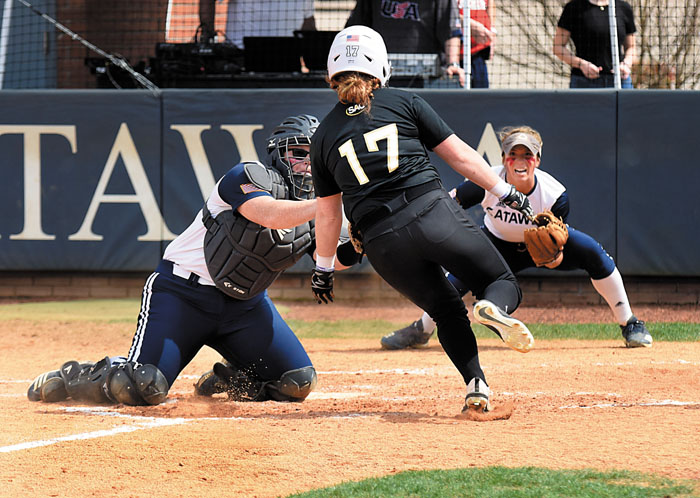 Wayne Hinshaw/for the Salisbury Post ... Catawba catcher Gracie Gibson, left, tags Anderson’s Mattison Cantrell (17) out at the plate in the 9th inning of Saturday’s first game at Whitley Field. Left fielder Allie Baker made the throw and first baseman Sierrah McCarthy is backing up the play. Catawba won the game, 8-7.

Fifteen of Catawba’s 31 games have been decided by one run. Seven of those went Catawba’s way, but eight didn’t.

“We’ve had so many games where if we get one more hit, make one more play or make one more pitch, we win — and our record looks a lot different,” Catawba’s first-year coach Mandy Harris-Morgan said. “But through some tough losses this team has kept a pretty even keel. These girls are able to stay calm in tough situations, and they’ve never laid down. They’ve fought every single game. That’s all you can ask for.”

After an exhilarating 8-7 victory and a draining 5-4 setback, Catawba (17-14, 5-5) is still in decent position in the South Atlantic Conference. Catawba is in a three-way tie for sixth. The top eight in the 11-team league qualify for the SAC Tournament, which Catawba will host on April 26-27 at Whitley Field.

“The league is just really wide open this year,” Catawba senior Sierrah McCarthy said. “Every time we look at the scores or we look at the standings, there’s a surprise.”

McCarthy’s perfect bunt with one out in the ninth inning scored Leah Huggins from third base and won the opener.

“Coach walked up and asked if I wanted to squeeze and my answer was that I absolutely did want to,” McCarthy said. “I’ve played with more confidence this year as a senior, and Leah really got on her horse on that play. All I had to do was get the bunt on the ground and she was going to score.”

Catawba had to rally to tie that opening game three different times. The Indians were down 4-0 almost immediately, as Anderson (20-14, 14-6) sent two shots out of the ballpark in the first inning. It could’ve gotten ugly, but Catawba starting pitcher Preston Ellenberg didn’t quit. She put zeroes on the scoreboard in the second, third and fourth. That gave Catawba a chance to catch its second wind.

“Anderson can definitely hit,” Ellenberg said. “I made a few small adjustments, worked a little bit more off the plate. It was a bad start, but I just had to hang in there and compete and try to give us a chance.”

Trailing 4-1 going to the fourth, Catawba bunched singles by Sydney Goertzen, Kaylee Cook, Jordan Dean and Leah Huggins for a three-run inning to get back to 4-all. Dean and Huggins delivered huge two-out hits.

Ellenberg allowed a leadoff double in the fifth and was replaced by Madison Hunter. Moments later, Anderson’s slugging catcher Mattie Hamilton took Hunter deep for her second home run of the game, and the Trojans (20-14, 4-6) led 6-4.

Catawba doesn’t hit the ball over the fence very often and is last in SAC in that category. Sophomore shortstop Jordan Dean, who is having a monster season, owns seven of the team’s 11 homers.

Heading to the bottom of the seventh, Catawba was still down 6-4, but Huggins, the senior right fielder, is a dependable .320-hitter and led off the inning with her ninth double. After Carlee Brawley’s single, the Indians had the trying runs on base. Huggins dashed home on a foul pop up down the first line by McCarthy to make it 6-5. Gracie Gibson’s crisp single to left made it 6-all.

In extra innings, teams start each inning with a runner at second base. Both teams scored once in the eighth.

Catawba left fielder Allie Baker threw a runner out at the plate to stop Anderson in top of the ninth. Then Catawba finally won it when Beth Ann Martin’s sacrifice bunt moved Huggins to third base and McCarthy’s squeeze got her home.

After that fifth-inning homer, Catawba reliever Madison Hunter (8-4) was terrific in the circle. She allowed only three hits in five innings and didn’t walk a batter.

“She’s been great in that role all year,” Harris-Morgan said.

That walk-off win handed Catawba major momentum going into the nightcap, and Brooke Walser (4-6) was strong in the circle.

Catawba led 1-0 until the fifth. Anderson stung several balls in the fifth and scored three runs, but Walser kept going.

Then Catawba answered with three in bottom half of the inning. Baker got that three-run inning started with a one-out single. Goertzen was hit by a pitch. Taylor Martin sent a wiggling single up the middle to score Baker and cut Catawba’s deficit to 3-2. Dean’s hard chopper down the left field line appeared to be foul, but the ball was ruled to have hopped over the bag, and Dean owned a run-scoring double. Huggins hammered a single that scored Martin with the run that put Catawba up 4-3, but Dean was thrown out at the plate.

Anderson had a runner at second base with two out in the seventh, and Walser, who struck out nine, was one pitch away from collecting a hard-earned win. Kasey Grant rapped a hard ground ball to the right side toward the hole. Martin, Catawba’s second baseman, made  a sprawling, spinning, diving stop. Martin was only a few feet from first baseman McCarthy and still had a split-second to make the throw, but she couldn’t yank the ball out of her glove. The tying run scored.

After a careful walk to Hamilton and a single up the middle by Morgan Charter (Martin smothered it, but didn’t have a play), Anderson had a 5-4 lead.

As usual, Catawba pushed it right to the limit in the bottom of the seventh. Baker walked, moved up on a passed ball and reached third when Cook slapped a right-side bouncer.

But Goertzen, another slapper, struck out with the infield pulled way in, before Martin whacked a 1-and-2 pitch directly at the third baseman to end it.

“Hard contact, but right at her,” Martin said shaking her head. “Story of my season, but we’ll keep fighting.”

Catawba came awfully close to winning two on Saturday, but it also could have lost two. Harris-Morgan could live with the split.

Catawba has a crucial doubleheader at Wingate on Wednesday.