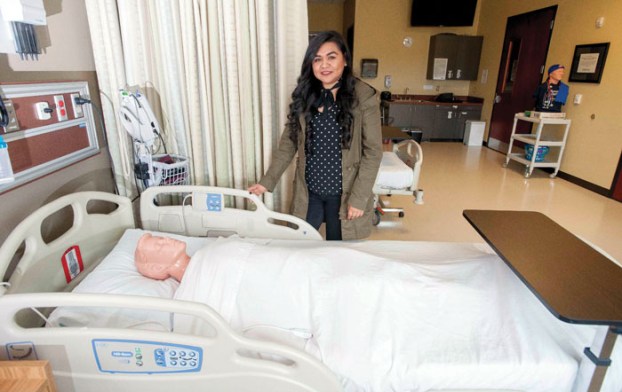 Fabiola Amezquita is working on her nursing degree from Rowan-Cabarrus Community College. A West Rowan High School graduate, Amezquita can be found in the nursing lab at the RCCC building on the North Carolina Research Campus. Jon C. Lakey/Salisbury Post

New Americans: Nurse from Mexico attains goal of US citizenship

Editor’s note: This article is the third in a series featuring New Americans. The Rowan Literacy Council recently assisted four local immigrants in attaining their citizenship – a lengthy and critical process. The Post is featuring one of them each Thursday in March.

KANNAPOLIS — Juana Fabiola “Faby” Amezquita came to America from Mexico when she was just 17 years old, a decade ago.

Her father had obtained his green card earlier and come to the United States. He’d worked hard to bring the family – Faby, four siblings and their mom. He saved up for their green cards, passports, everything, she says.

Her parents wanted a safer, better life for their children and wanted them to have an opportunity for a better education.

“It was hard to leave my friends at 17,” Amezquita says. “I wanted to go back every day. After time, I got used to it. I went to high school here for two years, took a little break and then started college.”

She says with a tiny proud smile that she’s the first in her family to attend college. She’s studying licensed practical nursing at Rowan-Cabarrus Community College.

English was the biggest barrier when the family first came here. Her dad speaks some English, but the rest of the family didn’t know the language.

“We had English class in Mexico, but it’s not like really talking,” Amezquita says. “We learned colors, names, how to start conversation, but it’s not much.”

The family relied on each other during the early days. Amezquita gets emotional talking about the transition.

“Our family stuck together. We were our own support system.”

Her siblings are younger than she is, so they learned English more quickly, she says.

Amezquita became a citizen about a month ago with the help of Don Doering, her tutor at Rowan Literacy Council. Doering, a 40-year registered nurse, also helped her with homework and gave her guidance on jobs. They worked together for over two years.

“I was thinking back to a year, a year and a half ago,” says Doering. “When we were reading stories, she had improved from reading mechanically to reading smoothly with expression. I asked her, ‘When you are reading? Are you translating from Spanish and understand it?’ She said, ‘I’m thinking in English.’”

“Most of my dreams are still in Spanish. We speak Spanish at home, although my brothers and sisters and I sometimes speak English to each other.”

She laughs and nods when asked if they speak English for privacy from their parents.

Amezquita says things are much easier now that she knows the language. She began working and having a social life, making friends at school.

She says Doering was a lifesaver. He helped her review the questions for citizenship, explained hard words to her, and worked through concepts she didn’t initially grasp. They used flash cards and books.

“I was really just giving her encouragement through this whole process,” Doering says, “reminding her what other people have done. I kept her calm. She went in there (to citizenship testing) dressed nicely, smiling, confident, and she nailed it.”

Amezquita says she was nervous, but the interviewer was kind to her and she calmed down.

He smiles at this.

“When I gave her advice, I would say, ‘Your grandfather is telling you to do this.’ Oh, boy, just the way my personality is, I quickly go from being just a tutor to a guidance counselor/social worker,” he says. “The things we talk about go way beyond the lessons for the day. I ask about her family and school. Sometimes we would spend the whole lesson talking about a school assignment. Or if she had problems with something, maybe a relationship, or a letter from the state about car registration, we walked through the whole process.”

“I become emotionally attached to each of my students – their lives become important to me. I want to see them succeed at whatever their goal is,” he says.

Culture in America is similar to culture in Mexico, she says. Manners are generally the same. There’s a strong culture in Mexico of caring for older people. Most fathers provide for the family; most mothers stay home and care for the children. It’s changing now, she says, and more moms are entering the workplace.

Amezquita is single and living at home with her family. She realizes some people may have prejudice against Mexican immigrants.

“We came here to get a better education, a better life, and, you know, they think we came to get their jobs, but … it wasn’t really safe in Mexico. There were cartels, and it wasn’t safe for us. After we left, it got really bad at home and we were safe in the U.S.”

She says her favorite thing about America is the freedom. She feels safe walking outside.

Stores in the U.S. are surprising, she says. In Mexico, she was used to little tiendas.

As a nursing assistant in home health care, Amezquita says she does whatever the patients ask. Some just need someone to be with them and to listen. Others need assistance getting out of bed, eating and attending to personal tasks.

She will complete her LPN this summer. Once she is licensed and passes the state exam, she plans to work as an LPN and go back to school to become a registered nurse.

Before studying nursing, she earned an associate degree in early childhood education. She loves children, she says, and wants to go into pediatric nursing. She says when she marries, she wants just one or two children and plans to work outside the home.

“I don’t see myself staying home when I am able to help other people.”

Amezquita’s sister recently attained citizenship, and her dad may try next. Because of his age, the law allows him to take the test in Spanish. Once her father attains citizenship, her brother would be a citizen, too, because he’s under 18.

“I woke up on that day,” she says of the citizenship ceremony, “and I was a little bit nervous, but I was also happy. It was something special. I had reached a goal.”

Rowan Literacy Council assists people in the area with learning to read, learning English as a second language and attaining citizenship. The council is a United Way agency. To volunteer or for information, call 704-216-8266.

By Shavonne Walker and Liz Moomey news@salisburypost.com SALISBURY – For the second time in less than a year, someone tossed... read more