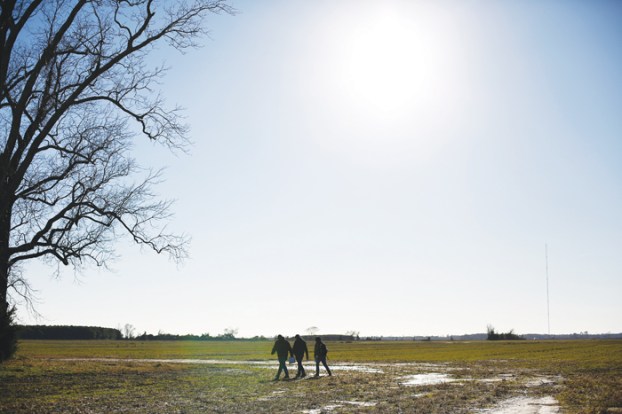 East Carolina University graduate students walk across a field to take readings from scientific wells as they study the groundwater. Eamon Queeney/for the Salisbury Post

But lately those barren patches have grown. On dry days, the salt precipitates out of the mud and the crystals make the soil sparkle in the sunlight. And on a damp and chilly afternoon in January, the salt makes Dawson Pugh furrow his brow in dismay.

“It’s been getting worse,” the farmer tells East Carolina University hydrologist Alex Manda, who drove out to this corner of coastal North Carolina with a group of graduate students to figure out what’s poisoning Pugh’s land — and whether anything can be done to stop it.

Of climate change’s many plagues — drought, insects, fires, floods — saltwater intrusion in particular sounds almost like a biblical curse. Rising seas, sinking earth and extreme weather are conspiring to cause salt from the ocean to contaminate aquifers and turn formerly fertile fields barren.

A 2016 study in the journal Science predicted that 9 percent of the U.S. coastline is vulnerable to saltwater intrusion — a percentage likely to grow as the world continues to warm. Scientists are just beginning to assess the potential effect on agriculture, Manda said, and it’s not yet clear how much can be mitigated.

“We spend a lot of time and money to try to prevent salt,” Pugh says. “I worry what the future is. If it keeps getting worse, will it be worth farming?”

If farmers in coastal areas have any hope of protecting their land — and their livelihoods — the first step is to disentangle the complex web of causes that can send ocean water seeping into the ground beneath their feet.

With that goal in mind, Pugh, Manda and Andrea Gibbs, the local agriculture agent for North Carolina Cooperative Extension, convened at the edge of Pugh’s saltiest field on a recent blustery afternoon.

Pugh, 41, has spent his adult life growing soybeans, corn and cotton in North Carolina’s “blacklands,” where the dark and fertile soil is a legacy of nutrient-rich swamps that were drained to make the region arable. His father farmed here in Hyde County before him, and his grandfather before that.

Pugh felt he was prepared for the challenges he would face with the brackish Pamlico Sound within spitting distance and just the thin sandy barrier of the Outer Banks between his farmland and the open ocean.

But lately, the problems have become relentless. Hyde County has been part of a declared disaster zone during four of the past five years, Gibbs says. Heavy rainfall and strong winds have caused millions of dollars in damage. Hurricanes Matthew in 2016 and Florence in 2018 brought several feet of storm surge that inundated the area with seawater.

Though Pugh and Gibbs demur when asked what they think is behind the recent disasters, science suggests that climate change plays a major role. Data from the National Oceanic and Atmospheric Administration show that sea levels near Pamlico Sound are rising at a rate of 4.4 millimeters per year — equivalent to nearly 1.5 feet over the next century.

Whatever the cause, both Pugh and Gibbs are anxious to find a solution. Pugh estimates that recent flooding — and the associated salinization — cost him $2 million in lost crops over the past five years. Last year, the field where Manda is now working became so pockmarked with barren patches Pugh stopped planting it altogether.

“No point in spending the money,” he says, “or the seed.”

And the barren patches may be growing. Most of the 4,000 acres that Pugh farms was inundated during Florence. “Just about everything was underwater for as far as you can see both ways,” he says.

Gibbs, who tested salinity levels in this field after the storm, says the results scared her.

“The numbers that were on that sheet,” she trails off. “You shouldn’t be able to grow anything in that.”

In the months after the storm, Manda and his students placed an array of scientific instruments in Pugh’s abandoned field: wells to monitor groundwater, probes that take salinity measurements at 10-minute intervals. On this winter day, they install a weather station, which will keep track of rain and wind.

Though it’s known that saltwater intrusion is linked to sea level rise caused by climate change, scientists aren’t certain exactly how salt winds up in farmers’ fields. One hypothesis is that strong winds may blow saltwater from the sound into the canals and ditches that crisscross the county, which then leak into the soil. Another possibility is that the salt was left behind by storm surge and simply takes a long time to wash away.

Or maybe the problem goes even deeper. Scientists are increasingly concerned that rising sea levels are shifting the “zone of transition,” the underground gradient where fresh groundwater meets salty seawater. This issue may be compounded by the slow sinking of North Carolina’s coastal plain since the end of the last ice age about 12,000 years ago.

It’s only through continued monitoring that Manda and his colleagues will figure out which of their theories is right.

A group of students returns from testing the water in a nearby ditch. “Two point seven,” they report — the liquid contains 2.7 grams of salt per thousand grams.

“The results are peculiar,” says Manda, who had expected to find that the salty water was coming from the ditch. If the groundwater is more saline than the canals, that suggests the salt is seeping up from below.

“From a science perspective, it’s fascinating,” Manda says — the unexpected results suggest the possibility of learning something new. “But from a farmer’s perspective, what can you do about it?”

Dykes and pumps can be used to hold back floodwaters from an encroaching ocean. Pugh has built some on his land. But little can be done to stop the slow mixing of fresh and salty water underground.

Looking on as Manda and his students collect their samples, Pugh thinks about the floodwaters that sat on his fields for days after Florence. He still doesn’t know how badly the storm surge damaged his soil, or how the lingering salt might affect the crops he plants this spring.

“Hopefully this next round of samples will tell us,” he says.

But no one can tell him what this summer holds, let alone what kind of devastation the next hurricane season will bring.

“If we have another year or two like the past five,” Pugh tells Gibbs, “not only will I not be farming. A lot of us won’t.”

“I know,” she says sympathetically. “But you’re a good farmer.”

Pugh gives her a nod. “Thank you.”

“Just had some bad weather,” Gibbs says. Then, in a tone of pure hope, she adds: “But not this year. It’s gonna be good this year.”

Pugh claps her on the shoulder. “That’s the optimism of a farmer.”