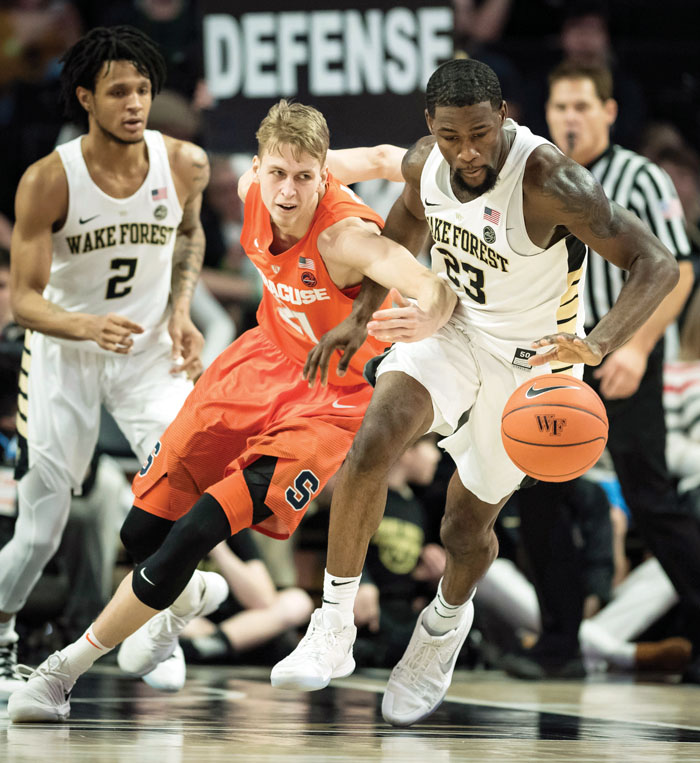 Wake Forest guard Chaundee Brown (23) takes the ball up the court while pressured by Syracuse forward Marek Dolezaj (21) during the second half of an NCAA college basketball game, Saturday, March 2, 2019, at Joel Coliseum in Winston-Salem, N.C. (Allison Lee Isley/The Winston-Salem Journal via AP)

WINSTON-SALEM (AP) — The schedule gave Syracuse a bit of a break after a tough run of games. The Orange handled it well, too, simply by not turning in a flat performance against a struggling opponent.

Tyus Battle scored 21 points and Syracuse held Wake Forest without a basket for 13½ minutes in the second half in Saturday’s 79-54 win, earning its 10th Atlantic Coast Conference victory and ending a two-game skid.

Syracuse (19-10, 10-6 ACC) had lost at home to then-No. 1 Duke and Tuesday at fifth-ranked North Carolina. The Orange then arrived at Joel Coliseum — a venue where they lost last year — as the easy favorite against a host sitting near the bottom of the league standings.

The Orange led by just five early in the second half before the Demon Deacons went cold and gave the Orange their chance to steadily stretch the lead into a blowout. They also hummed along on the offensive end, shooting 54 percent while dominating inside to finish with a 44-10 edge in points in the paint.

“It didn’t feel like it,” Brown said of the 13-minute basket drought, adding: “It just feels like we weren’t sharing the ball. We came into this game and knew the open spots would be in the high post and the short corner. We didn’t kind of get into those spots.”

Syracuse: This was the second straight game in the state of North Carolina for the Orange, which had followed a difficult stretch of three straight games against ranked opponents — with two ranked in the top five. Things were much easier Saturday.

Wake Forest: The Demon Deacons had come in with some momentum after rallying from 10 down in the last two minutes to beat Miami on Tuesday night. Things turned ugly this time, with Wake Forest missing 11 straight shots and committing frequent turnovers as the game turned into a rout. The Demon Deacons shot 33 percent for the game and committed 14 of their 23 turnovers after halftime, leading to 18 points off turnovers for Syracuse after halftime and 27 for the game.

“It’s tough playing against the Syracuse 2-3 (zone),” said Wake Forest’s Isaiah Mucius, who had 10 points. “They’re super athletic. … We tried as best we could. They just played great defense and we had a tough time scoring the ball.”

Syracuse’s Frank Howard said the players know about their NCAA Tournament resume and how losing games like this one at Wake Forest can hurt their standing. At the same time, he said, they’re not consumed by it.

“As far as that being the main agenda,” Howard said, “like ‘we need this one’ or ‘we can afford to lose this one,’ no … I think that mindset will get you beat.”

Syracuse: No. 2 Virginia visits the Orange on Monday.

Wake Forest: The Demon Deacons visit No. 3 Duke on Tuesday.