Brown says ‘too much smoke’ to return to Steelers 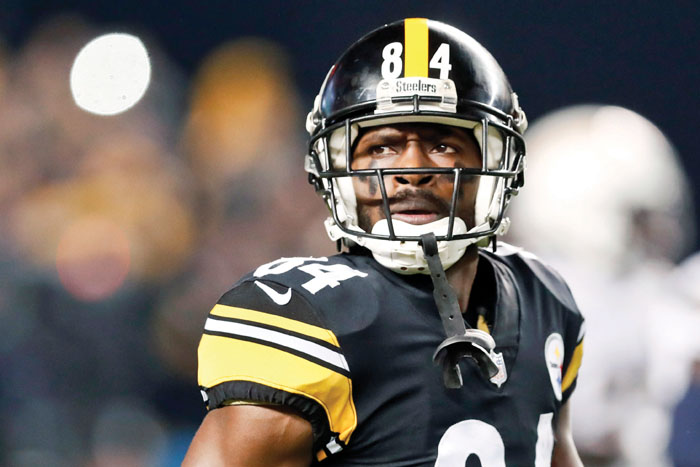 FILE - In this Dec. 2, 2018, file photo, Pittsburgh Steelers wide receiver Antonio Brown (84) plays against the Los Angeles Chargers in an NFL football game in Pittsburgh. If the Steelers trade the star receiver they’d prefer to send him to a team they don’t play often. But general manager Kevin Colbert said, Wednesday, Feb. 27, 2019, that calculation could change depending on the offer. (AP Photo/Don Wright, File)

Brown doesn’t see it that way.

According to a transcript provided by HBO, the four-time All-Pro told LeBron James on James’ HBO show “The Shop” that there’s “too much smoke” between Brown and the team for Brown to play for Pittsburgh in 2019. Brown’s conversation with James marked his first extended public comments since requesting a trade last month.

The Steelers are shopping Brown but general manager Kevin Colbert has stressed the team won’t cut him or make any personnel move that would be detrimental to the team, reiterating there’s a possibility the Steelers won’t move Brown if they don’t receive what they consider fair value.

Brown, speaking with a group that included James, rapper Meek Mill, actor Jamie Foxx and New Orleans Pelicans center Anthony Davis, took issue with the way the team has portrayed him after benching him for the regular season finale against Cincinnati. Brown says he told head coach Mike Tomlin he was banged up, and Tomlin then told him to go home. Tomlin said the team benched Brown because Brown declined to update them on his health in the 24 hours leading up to kickoff.

“It’s a controlled environment to where they could, they could kind of determine if, if they want to let me eat or not,” Brown said.

Brown said the team only labeled him a “distraction” after he started “doing his own thing.”

“That’s the narrative they try to create,” Brown said.

Brown added he has a problem with quarterback Ben Roethlisberger. Brown said Roethlisberger “feels like he’s the owner.” Brown pointed to Roethlisberger’s comments about Brown running the wrong route in the end zone in the final moments of a loss to Denver late in the regular season. Roethlisberger threw an interception on the play. Brown feels Roethlisberger should have taken more responsibility.

Johnny Manziel could wind up as part of the Alliance of American Football. Or he could not.

The new league is in a holding pattern regarding the quarterback who had his contract terminated this week by the CFL.

“We don’t know,” Alliance co-founder Charlie Ebersol said Friday. “We’re trying to get to the bottom of what happened in Canada.

“We want to be a league of opportunity to the best available players, assuming they are available contractually, with a clean bill of health and a clean criminal record.  We want them if they can play at our level. We have to have guys who play at a level that every single guy has a shot to get back to the NFL.

“We look at everybody. If he is clean and clear, we will certainly talk to him about coming out for a workout.”

The AAF enters its fourth weekend. The San Antonio Commanders would have the first shot at Manziel because he went to Texas A&M, and he would go through the league’s waiver process should the Commanders pass on him.

Manziel’s contract with the Montreal Alouettes was terminated Wednesday.

The league also told the eight other CFL clubs it wouldn’t register a contract for Manziel if anyone tried to sign the 2012 Heisman Trophy winner.

The league said Manziel, a first-round draft pick by Cleveland in 2013 who soon flamed out of the NFL, breached an agreement that made him eligible for the CFL.