Salisbury gathers to remember Patsy Reynolds, a ray of sunshine 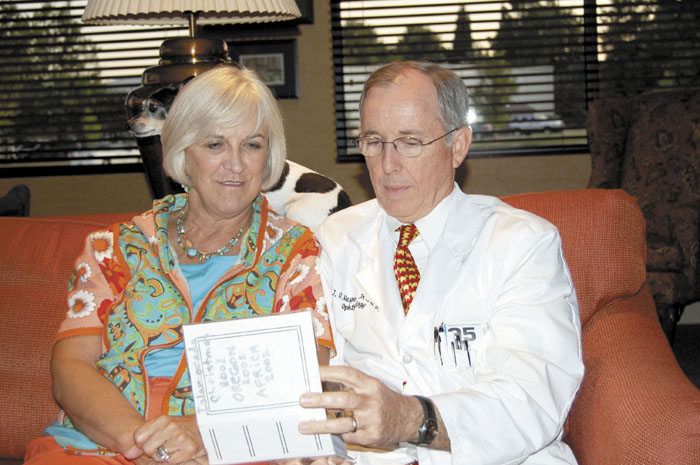 Patsy and Dr. Ozzie Reynolds look through photographs from one of their 10 trips together to Mwandi in Zambia, Africa. Reynolds has performed more than 500 cataract surgeries with his wife's assistance on the mission trips. Photo by Mark Wineka, Salisbury Post.

Chance Reynolds has been a pilot for 20 years, and, no matter how dreary it is on the ground, he could always count on seeing the sun every day.

“When you saw Patsy, it was like the sun was shining especially for you,” he said of his mother.

Since last March, Patsy Reynolds had fought a no-holds-barred battle against pancreatic cancer. She died Feb. 21 at Kiser Hospice House, with Chance and Ozzie, her beloved husband of 50 years, by her side.

The whole town, it seemed, had cheered Patsy on. There were calls and cards and texts and flowers and meals and candy and on and on and on.

“I just can’t tell you the dearness of people,” Patsy said in November as she prepared for what was successful surgery. But complications afterward were too much for her body to endure.

The whole town, it seemed, turned out for Patsy’s celebration of life at First Presbyterian Church on Monday. I made sure I was in my seat by 1:15 p.m. By 1:30 p.m., a half-hour before the service time, the sanctuary was overflowing. Ushers Kenan Smith, Marny Hendrick, John Grubb, David Hall and others must have fetched every folding chair they could find. The balcony was full with folks standing in the back — a reminder to me of the great cloud of witnesses watching over us, a group that Patsy now claims.

The family took up more than four rows when they came in at 2 p.m. I thought that was everyone who had been standing in the back, but the foyer remained crowded the entire service. I had to chuckle when John Stafford, minister of music, gingerly made his way to the grand piano, for chairs surrounded it, too.

He had played “Nearer My God to Thee” on the organ earlier, and I again had to smile, because we were crammed in the pews as near to one another as we could get. The Revs. Josh and Lara Musser Gritter and Dr. Randy Kirby stood at the front before the service, looking as if they wondered how we’d all fit. Somehow, we did.

I sat beside Sara Banish, who told me during the preludes “this is the loudest funeral I’ve ever been to, and Patsy would just love it.”

She would have loved all of it. Josh preached the message of hope, and used the word love a lot, as did the four speakers. Along with the words laughter, smiles, darling, bright, light and dancing. Of course, dancing.

There’s that old saying, Chance said, “Dance like no one is watching.”

Not so with Patsy. “Dance so everyone watches.”

Chance said he struggled over the past two weeks with being home with his own family in Tennessee and being with his parents in Salisbury. He told the palliative care physician he did not want to miss the moment of his mother’s death, but the doctor told him it would just be another moment.

Patsy, Chance said, was the “queen of moments.”

And there were so many great moments the past couple of weeks in Salisbury, with stories of Patsy from family and friends and complete strangers, Chance said. His daughter, Kate, 11, said it would be OK to be away from home on Valentine’s Day, so he took turns with Ozzie staying nights at the Kiser House.

And in the end, he said, it was just another moment when Patsy died.

“Cherish the moments and take advantage of them,” he said. “Be that ray of sunshine like Patsy was to so many.”

Cousin Becca Stine read a poem about Patsy, reprinted in the bulletin — whimsical words about pink wrapping paper and waving at people in traffic jams and keeping a chained leopard in the downstairs bathtub.

You are the source, Patsy.

A mentor in every memory

The woman behind the counter

The bulletin even included a resumé of sorts. Among her myriad accomplishments: elder, linguist, mentor, advisor, hat lady, collector, mixologist, card-playing aficionado, and would-be Oscar nominee for “Most Flamboyant Extra” in the film “Dirty Dancing.”

I’ve never laughed out loud during a prayer, but I did when the Rev. John Cook prayed. He envisioned Patsy’s version of heaven would include shagging on the beach with her son JohnO, holding court on a long dock, showing off trinkets she bought during her extensive travels, each one of them on sale.

There was so much laughter, but there were tears, too — because Patsy’s life wasn’t all light. There was so much darkness 30 years ago with JohnO’s death on June 11, 1989. Patsy told me last summer that after his death, she no longer feared her own, and chose to live fearlessly. People at Patsy’s funeral told me the crowd was just the same at JohnO’s service.

“But death did not have the last word with his family,” Josh said. “It broke their hearts open to a family bigger than anyone could imagine.”

When he visited Patsy in the hospital, her pastor said he had no idea who her biological family was because there were so many folks gathered.

That extended family included Prem Manjooran, JohnO’s Davidson College roommate, who was captivated by Patsy from the moment he met her his freshman year. He became her honorary son after JohnO died.

“The world was her stage and she owned it,” he said. “She was the best travel companion I ever had. I will miss the joy she brought to every single day.”

Hundreds of people gathered after the service for a reception in Lewis Hall — one last party for Patsy. After weeks of rain, it was a gorgeous afternoon.

I introduced myself to Chance because we’d only talked on the phone when I’d written the articles about his mom.

We hugged, and then, still holding onto my arms, he looked into my eyes, and told me how much he appreciated those articles.

And in that moment, there it was.

The sun was shining especially for me.