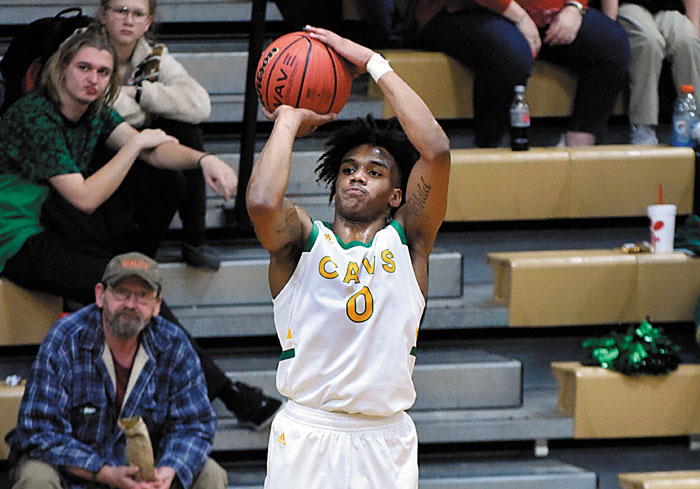 SPENCER —Nobody knows how North Rowan’s post-season adventure will end, but it made quite an opening statement Tuesday night.

The host Cavaliers launched the 1A boys basketball state playoffs with a lopsided, 77-36 victory against the Concord-based Carolina International School.

“We did our jobs,” coach Jason Causby said, moments after third-seeded North (25-2) rolled to its 18th straight win and into Thursday’s second round. “We prepared and knew what to expect. They were going to pack it in and make us beat them from the outside. And you know what? They had a good game plan.”

That’s debatable. CIS (8-18), the No. 30 seed, never led, but kept the game close for the first four minutes. A pair of free throws by senior guard Tamauri Smith drew the guests within 10-7, midway through the opening period — but that’s when North turned a cordial sit-down into an all-you-can-eat buffet.

“Then we started having fun,” beamed senior forward Dayjuwon Cooke. “We started moving the ball around and playing our game.”

The party started when 6-foot-4 teammate Brevin Goodlett took a baseline feed and scored on an earthquake dunk with 1:50 remaining in the first quarter. He followed that with a 3-pointer from the right side, triggering a 22-0 run that included the second of Cooke’s five crowd-pleasing jams and put North in control.

“I think we were sharing the ball and everyone was getting a feel for the game,” said Goodlett, the game’s high-scorer with 26 points. “We didn’t come in thinking of them as pushovers, but we wanted to throw the first blow.”

The Cavs used a last-second 3-pointer by sophomore Zay Davis to mount a 46-21 halftime lead. By then, CIS was well on its way to a season-ending loss, its seventh straight and 10th in its final 11 games.

“When we get a positive play in this building, it energizes the fans,” Causby said. “They’re a big part of our success. Once we made a three, the crowd was just getting into it. We turned around, got a steal and a dunk, and the crowd was even more into it. As that momentum builds, the crowd feeds off our guys and our guys definitely feed off the crowd.”

North’s second string provided a second helping as the third quarter bridged the fourth. Long-range connections by Davis and Russell Bacon fueled a 20-0 scoring spree that made it 77-35 and turned the last 3:40 in a running-clock victory lap.

“We’re just happy we’re going to the next round,” said Cooke, who finished with 17 points and five stuffs. “We know we’ll have to work harder the next game. Every game from now on will be harder than the one before it.”

“You want to have more points than your opponent on the scoreboard,” he said. “We even got some style points tonight, I guess. The name of the game at this point is survive and advance. I don’t know how well we survived, but we handled things the way we needed to.”

NOTES: Goodlett sank five of North’s eight 3-balls. … Defensively, North limited CIS to 11 field goals, none in the fourth quarter. … The Cavs improved to 11-0 at home and will host Union Academy (19-9), the 19th seed out of Monroe, at 7 p.m. Thursday. The Cardinals have won three of their last four games.