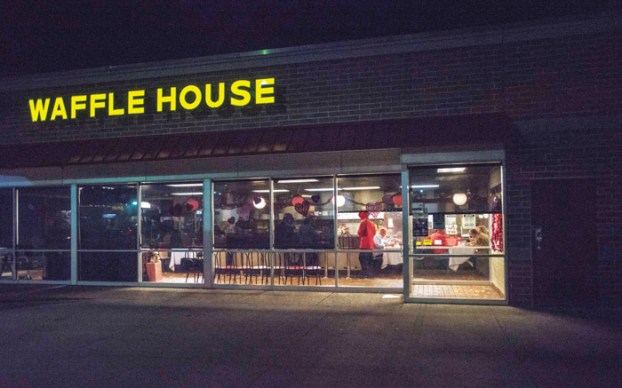 Last Thursday, Feb. 14, marked the globally celebrated day of love, where many happy couples and an equal number of all-too-aware singles spent the day indulging in nice food, gifting flowers and stocking up on stashes of sweets. Still, something more sinister went on nationwide as another restaurant transformed away from its casual appeal.

With businesses eager to capitalize on the occasion, numerous restaurants, including some institutions of American culture, came up with ways to lure couples and singles into their shops.

One such institution was the local Waffle House, which joined the celebration of Valentine’s Day. The importance of the institution is so engrained in American society that is even ranked by FEMA as a measure for weather severity.

For those of us who love the iconic institution, Waffle House temporarily  seemed like an unfamiliar and high-end place.

Instead, a reservation was needed to be seated. Tables were covered in white cloths.

It was odd to say the least; the very institution known for its 1 a.m. grimy grub had now betrayed its very own self-created, cultural niche as well as its honest, down-to-earth, simple and purely American design, an iconic image throughout the US.

While some might argue this offense is as a heartfelt attempt to bring in additional revenue, it should not be taken as such.

According to USA Today, Waffle House has been a repeat offender of this brand disloyalty throughout the past 12 Valentine’s Day festivities in over 21 states.

To be clear, the offense of offering a different, more polished evening for those wanting to eat at Waffle House for Valentine’s is not a dishonest act.

“But the Waffle House experience, little changed since it debuted in Georgia in 1955, may now be in for an overhaul,” reported City Lab in response to Waffle House’s announcement to build the “fanciest” version of the restaurant in New Orleans.

City Lab went on, “Waffle House … has a certain architectural je ne sais quoi.” An element many have come to admire. The article added, “The company owes that status to an architect you’ve never heard of, Clifford A. Nahser … As the chain grew, Nahser went on to design hundreds more restaurants, drawing up the plans in his basement after his day job at Atlanta Public Schools.”

So what is happening now? Why is something with such an iconic image as an American institution falling short of its own brand?

These questions raise concern, but I cannot provide any answers.

However, what I can say is when I step foot into the ubiquitous, yellow-roofed, modest piece of American culture, I want — and I rightly assume the same of many other restaurant-goers — what I always want (Valentine’s day or not). We want the warm friendly glow of incandescent lighting (not candles), the 24-hour breakfast served on unclothed tables and an overall casual setting.

The nature of reservations with candle-lit tables featured on white linens is disloyal to its family atmosphere as well as its simple ambiance, which many have come to know and love.

For attendees, I cannot blame you, nor should I. The same goes for those dining at New Orleans’ upscale Waffle House. However, these moves take the southern icon one step further away from its roots and brand legacy. They inherently scale-up the institution away from the very consumer base that funded it in the first place.

Thankfully, Valentine’s Day is once a year, so we can all return to our beloved, hostess-free, 24/7 diner.

But the slow upscaling of the simple, pure and iconic American design — of our great American institution, Waffle House — is something that I cannot stand by and watch unnoted.

Samuel Motley is a newsroom intern for the Salisbury Post. Email him at intern@salisburypost.com.

It was reported last week that Mayor Al Heggins released a statement condemning raids made across the country by ICE... read more