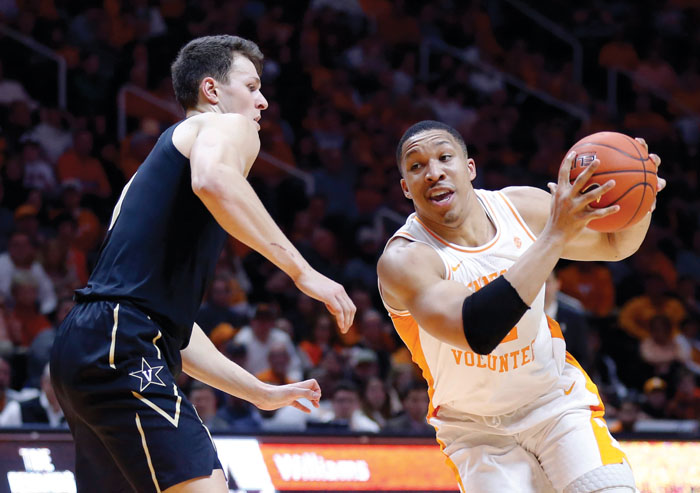 By STEVE MEGARGEE, AP Sports Writer
KNOXVILLE, Tenn. (AP) — Tennessee’s offense was bad. Vanderbilt’s was worse.
On a night when both teams posted their lowest point totals of the season, No. 5 Tennessee outlasted Vanderbilt 58-46 on Tuesday in the Volunteers’ first game since losing their No. 1 ranking.
“I think we were really good defensively,” said Tennessee’s Lamonte’ Turner, who scored 12 points. “I think we guarded them well, and I think we disrupted a lot of their sets and stuff like that. Offensively for us, I think we turned down some shots, and some shots that normally fall didn’t fall tonight. You have those nights.”
Tennessee (24-2, 12-1 Southeastern Conference) bounced back from its first loss since Thanksgiving week, an 86-69 defeat at No. 4 Kentucky on Saturday to snap a school-record 19-game winning streak.
Vanderbilt (9-17, 0-13) dropped its 14th straight, matching the longest skid in school history. Vanderbilt had a 14-game losing streak that began in 1934-35 and carried over to the next season.
Even as the losses pile up, Vanderbilt coach Bryce Drew remains upbeat.
“You saw the character of these guys, saw how hard they fight,” Drew said. “Losing’s not fun. It brings out the worst. But we’re building something here.”
Vanderbilt shot just 32.1 percent (18 of 56) overall and 23.5 percent (8 of 34) in the second half. Tennessee won despite scoring just two points during a stretch that lasted nearly nine minutes.
Tennessee coach Rick Barnes said he liked the way his team responded after the loss to Kentucky, even if the score didn’t necessarily reflect it.
“We came out (Monday) and had as good a practice as we’ve had in probably three weeks,” Barnes said “We came out tonight, and I thought defensively we were very good, and we had some shots we didn’t make.”
Grant Williams had 14 points and 11 rebounds for Tennessee, while Admiral Schofield added 12 points. Aaron Nesmith scored 13 points to lead Vanderbilt.
Turner put Tennessee ahead for good 16-13 with 12:47 left in the first half when he sank a 3-pointer while getting fouled to produce a four-point play. Turner added another 3-pointer less than a minute later as part of an 11-0 run.
Tennessee led by 14 in the first half before its offensive woes enabled Vanderbilt to cut the lead to four on multiple occasions in the second half. Vanderbilt’s own issues on offense prevented the Commodores from getting any closer.
“We translated the defensive intensity that we brought to shootaround,” Williams said. “We just didn’t translate much offense.”
BIG PICTURE
Vanderbilt: If Vanderbilt played other opponents as tough as it plays Tennessee, the Commodores would have a much better record. The closest Vanderbilt has come to a win during this losing streak was an 88-83 overtime loss to Tennessee on Jan. 29. Vanderbilt led that game much of the way and gave Tennessee a challenge again Tuesday.
Tennessee: The Vols struggled in the opening minutes of the second half for a second straight game, only this time it wasn’t quite as costly. Kentucky pulled away from Tennessee on Saturday by scoring the first 14 points of the second half. Tennessee scored just two points in the first 7 ½ minutes of the second half Tuesday but played defense well enough to stay in front.
NOTABLE NUMBER
Williams missed his only free-throw attempt of the night. He went 23 of 23 from the foul line while scoring 43 points in Tennessee’s overtime victory at Vanderbilt last month.
SEEKING DONORS
Tennessee’s players wore T-shirts with the message “Donate Life” during pregame warmups as part of an initiative to encourage fans to become registered organ and tissue donors.
Organ donor recipients also wore the “Donate Life” T-shirts as they gathered on the Thompson-Boling Arena floor before the game. Fans who registered as organ or tissue donors during the game got to go on the floor and pose for a group picture with Barnes afterward.
Tennessee athletic department spokesman Tom Satkowiak received a liver transplant Oct. 18 after spending more than four years on the waiting list. Satkowiak received a standing ovation after a video detailing his health situation played on the scoreboard at halftime.
UP NEXT
Vanderbilt is at Alabama on Saturday.
Tennessee visits No. 13 LSU on Saturday.
___
Follow Steve Megargee at https://twitter.com/stevemegargee
___
More AP college basketball: https://apnews.com/Collegebasketball and https://twitter.com/AP_Top25