Chaplain Rice a voice of inspiration for police officers 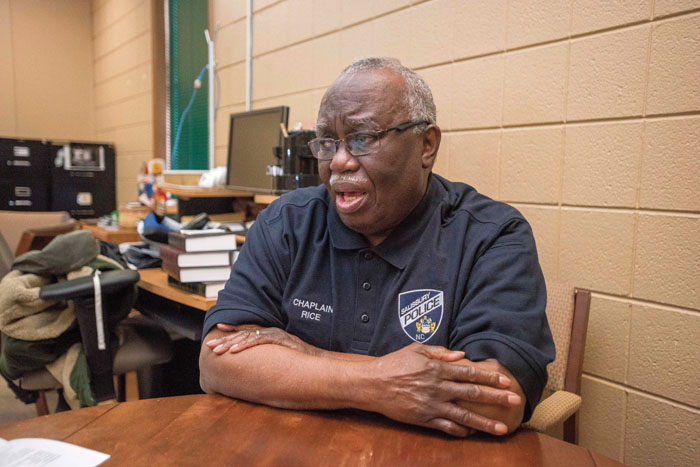 SALISBURY — When disaster strikes, it’s often that officers of the Salisbury Police Department turn to a man of God for spiritual guidance and inspiration.

Or when they simply need a listening ear, they call on Harvey Rice.

Rice, a longtime minister, is one of four chaplains with the Police Department.

“Russ Williams twisted my arm about it, so I did it and I’m glad,” Rice said.

The other chaplains are Gary Mason, Russ Williams and Tom Teichroew.

Rice was raised in New Jersey lived there until 1972. Before becoming a minister, Rice was a black-and-white photography technician at a photography studio.

He and his wife, Sadie Victoria Hawkins, were married in 1962. Rice said Sadie was dating his best friend, but they broke up. The two were married and moved in 1972 back to his wife’s hometown of Salisbury.

“I fell in love with the place. I felt led of the Lord to come here,” he said.

Rice attended two years of college at N.C. A&T State University and two years at Christian School of Theology, where he obtained his bachelor of theology degree.

Rice worked at a Winn-Dixie grocery store, then went into full-time ministry.

Salisbury Post: When you think about black history, who inspires you and why?

Rice: Dr. Edna Sheffield and the Rev. Winston Hodges. They definitely had an influence on my life. All of my ministerial ways came from her. He was my mentor and friend.

Rice: The loving way she treated people. She was a good preacher. She had charisma, and folks were drawn to her.

Rice: “During my time, I have written 14 books, most commentaries, two books of poems and short stories.”

Rice retired as head of Mount Calvary Holy Church in 2017, but he continues to preach, conduct revivals and lead seminars on the book of Revelation, which is the subject of one of his books.

“The thing I wanted was for the church to keep going. Eric Susong took it from there, making it better,” Rice said.

He said because Susong has done well, he never had to look back.

“I always loved the church and loved working in it,” Rice said.

Rice said he never considered himself a writer but relied on the Lord to direct him and tell him what to write.