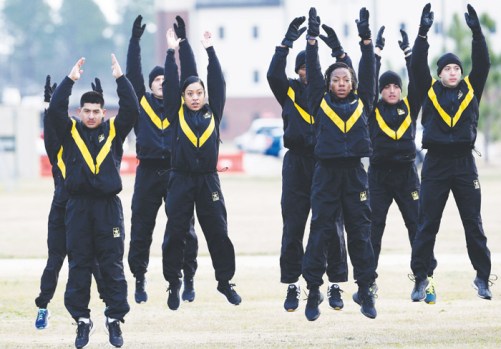 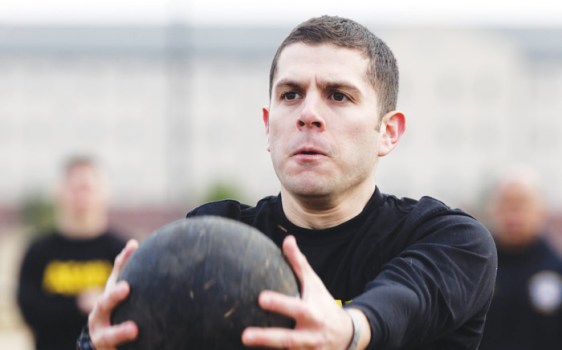 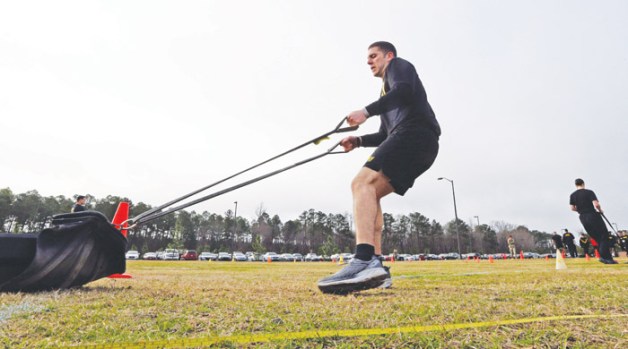 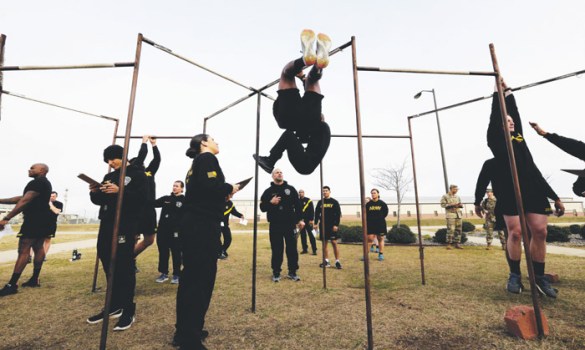 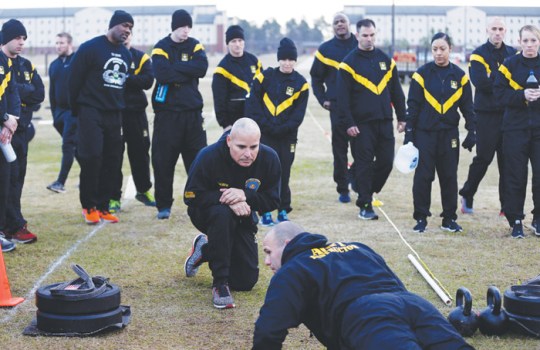 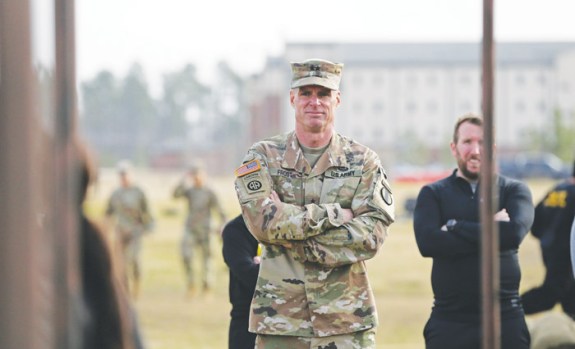 FORT BRAGG — Army soldiers struggle to haul heavy sleds backward as fast as they can down a grassy field at Fort Bragg, filling the brisk North Carolina morning air with grunts of exertion and the shouts of instruction from their coaches.

As a military intelligence specialist he spends a lot of time behind a desk. Over his two decades in the Army, he could easily pound out the sit-ups, pushups and 2-mile run that for years have made up the service’s fitness test.

But change has come. The Army is developing a more grueling and complex fitness exam that adds dead lifts, power throws and other exercises designed to make soldiers more fit and ready for combat.

“I am prepared to be utterly embarrassed,” Sampson said on a recent morning, two days before he was to take the test.

Commanders have complained in recent years that the soldiers they get out of basic training aren’t fit enough. Nearly half of the commanders surveyed last year said new troops coming into their units could not meet the physical demands of combat.

Officials also say about 12 percent of soldiers at any one time cannot deploy because of injuries.

In addition, there has long been a sense among many senior officials that the existing fitness test does not adequately measure the physical attributes needed for the battlefield, said Gen. Stephen Townsend, head of U.S. Army Training and Doctrine Command.

The new test “may be harder, but it is necessary,” Townsend said.

Reaching the new fitness levels will be challenging. Unlike the old fitness test, which graded soldiers differently based on age and gender, the new one will be far more physically demanding and will not adjust the passing scores for older or female soldiers.

For example, in the current test — two minutes of sit-ups, two minutes of pushups, a 2-mile run — younger soldiers must do more repetitions and run faster to pass and get maximum scores than those who are older or female.

Townsend said the new test was designed based on scientific research that matched specific exercises to tasks that soldiers in combat must do: sprint away from fire, carry a wounded comrade on a stretcher, haul cans of fuel to a truck.

The scoring is divided into three levels that require soldiers with more physically demanding jobs, such as infantry or armor, to score higher.

“We needed to change the culture of fitness in the United States Army. We had a high number of nondeployable soldiers that had a lot of muscular/skeletal injuries and medical challenges because we hadn’t trained them from a fitness perspective in the right way,” said Maj. Gen. Malcolm Frost, commander of the Army’s Center for Initial Military Training and the officer in charge of developing the fitness test.

“The goal is about having a more combat-ready Army.”

Frost said that about one-third of the soldiers who come into the service leave before their third year, many because of muscular skeletal injuries. The new test, he said, will help screen out recruits who are less physically fit and mentally disciplined.

Those who make the cut are more likely to stay in the service.

It will also challenge senior officers such as Sampson, who have been doing less physical desk jobs.

“It breaks the mindset of, ‘I am an intel soldier,’” said Sampson. “It changes it to ‘I am a soldier,’ because bullets on the battlefield don’t discriminate.”

The Associated Press was with Frost on a recent sunny day as he watched soldiers from three battalions go through the test. The six events take nearly an hour and are done in order with only a few minutes rest in between:

• A standing power throw, which requires soldiers to throw a 10-pound medicine ball backward and overhead.

• Hand-release pushups, completing as many as possible in two minutes.

• After a short rest, the soldiers do the leg tuck pull-up, as many as possible in two minutes.

“Many folks find it easy to do the maximum standard for the current test,” Frost said. “This new test is gender- and age-neutral. I cannot max this test.”

Across the country, 63 battalions are working on the final test development and will eventually go back to their units and train others. By Oct. 1, the entire Army will be using the test. By October 2020, it will be the official exam that all soldiers have to pass.

Technique is key to success. As the soldiers lined up to fling the medicine ball back over their heads, coaches stood by ready to shove them out of the way if the ball went straight up and came right back down.

The first throws landed with a chorus of thuds; many throws fell short. But the second and third tries went farther as soldiers figured out when to release the ball.

Next they quickly moved to pushups. Crouched beside a soldier straining to master the hand-release, Frost shouts out encouragement and then drops down to demonstrate proper form. Each time the soldier lowers his body, both hands must quickly lift off the ground and immediately press back down for the next pushup.

A few lanes away, Staff Sgt. Idis Arroyo has started what most consider the toughest element, the sprint-drag-carry. Pulling the 90-pound sled backward down the lane, her feet slip and she stumbles.

Arroyo bounces up, drags it to the end and shifts quickly to the next movement.

How hard was it?

“It was pretty difficult,” said Arroyo, who is with the 519th Military Intelligence Battalion. “Once we got into the sprint-drag-carry and then sprint again and the laterals and all that, I think that was actually the hardest part.”

But she said she knows it will help her when she has to embed with a combat unit.

Commanders said the test will be harder for less fit soldiers or longtime veterans, who are in less physical jobs, and many may fail at first. But they said that over time, as soldiers adjust and get stronger, their scores will improve.

Lt. Col. Eric Haas, commander of Arroyo’s battalion, watched as his soldiers powered through the test. He said it was very telling to watch fit leaders struggle.

“This is a good assessment of where we are physically,” Haas said. “For years, I’ve been taking the Army physical fitness test, and that’s the most miserable I think I’ve seen a 2-mile finish line.”

Sampson, who is also with the 519th battalion and has deployed three times to Iraq and Afghanistan, said improving fitness will make his soldiers more prepared to do their jobs.

“It doesn’t matter that 90 percent of the time I may sit in a chair working behind a computer,” he said. “I’m going to have to move a person from Point A to Point B.”

As for his expected embarrassment on the test? He scored well and passed.