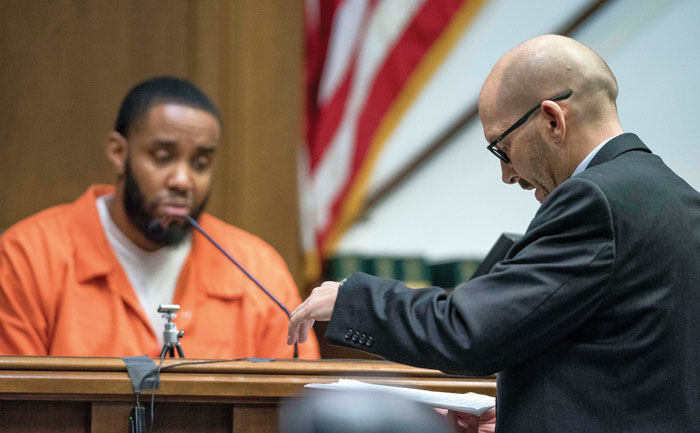 SALISBURY — Kenneth Abel testified Wednesday to corroborate statements that he and two cousins went to the home of Antonio “Tony” Walker in October 2014 to rob him. Walker and an uncle, James “Junior” Walker, were both shot and killed that night.

Kenneth Abel’s cousins, Darius Abel and James “Mikey” Robinson, are on trial for the murders.

The three met at the Salisbury Walmart earlier that night and bought gorilla masks from the Halloween section, Kenneth Abel said. They paid for them separately and met in the parking lot.

In testimony on Monday, Jasmin Walker and Angela Hill, the sister and mother of Tony Walker, both said the three men who walked into the house wore gorilla masks.

There was some concern about Kenneth Abel incriminating himself, but after conferring with his attorney, James Davis, he continued to testify. Abel accepted a plea agreement in September in exchange for “truthful, complete” testimony against his cousins.

Although he hasn’t been sentenced yet, Kenneth Abel is expected to serve 21 to 26 years. He’ll be sentenced after the trial.

According to Kenneth Abel, the decision to testify against his family was a difficult one.

“We was supposed to rock it all the way till the end,” he told the court.

“What do you mean?” asked Assistant District Attorney Paxton Butler.

“I was supposed to be sitting over there, too,” Abel said, indicating the defense table.

Kenneth Abel said he, Darius Abel and James Robinson discussed doing a “hit and lick” or robbing someone. They’d talked about a known drug dealer, Tyson Wiggins, who was robbed of $40,o00, and how they could do something similar.

Eventually, Tony Walker’s name came up as a robbery target. The trio discussed what they needed including masks, guns, zip ties, gloves and a driver. Larry Hairston drove the three to the Walker home in Spencer that night, Kenneth Abel said on the witness stand.

The zip ties came from Lowe’s Home Improvement, the guns from Hairston and gloves from Darius Abel.

Former Knox Middle School Principal Terrence Snider testified that he ran into Darius Abel and James Robinson the evening of Oct. 8 as they were buying gorilla masks at Walmart. He knew the two as former students at Salisbury High School when he was an English teacher there.

Snider came forward after he heard and read about the murders on television and in the newspaper.

Kenneth Abel admitted on the witness stand that the robbery didn’t go as planned. He said he didn’t recall who went into the home first, but he did remember beating Junior Walker with Walker’s own gun.

Contrary to the testimony of Jasmine Walker and her mother, Angela Hill, that “the tall one” — meaning Kenneth Abel — told Junior Walker to not try to reach for his gun, Kenneth Abel said he didn’t recall saying that.

He testified that he hit Junior Walker a few times with the butt of the gun. He said he and his cousins all left together, but when he realized his cellphone was not in his pocket he headed back with Darius Abel to get it. They stopped when they heard sirens nearby.

When they ran from the scene, James Robinson and Larry Hairston had already left, he testified. Kenneth Abel said he and Darius Abel ran all the way to the home of Darius Abel’s mother on Kerr Street. He estimated it took them about two hours.

The four of them stayed at the home for about another hour, then went their separate ways, he said. Kenneth Abel said he went to his girlfriend’s house in Winston-Salem.

He said he made several statements to law enforcement officers, each time lying about certain details of the robbery and murder. He finally admitted the truth in 2018 when he wrote a statement for authorities, he said.

The court also heard from Teresa Coughenhour, who was a loss prevention manager at Walmart at the time of the murders. She testified that she was able to retrieve surveillance video from the night the trio bought the gorilla masks.

The prosecutor played video clips for jurors that showed all three men inside the store and confirmed that they split up to make their purchases, then left the store and met in the parking lot.