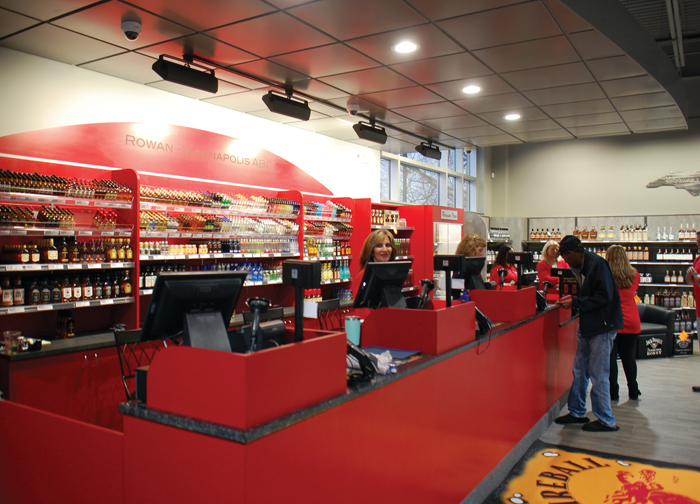 A new effort is underway to change the way liquor is sold in North Carolina, possibly going from the state-controlled ABC stores to private businesses. This is the newest ABC Store in Rowan County. Mark Wineka/Salisbury Post file photo

RALEIGH — The state legislature is weighing anew whether changing how liquor sales have been regulated for decades is worth boosting the number of retail outlets selling spirits with what critics call the risks of increased alcohol consumption.

The General Assembly’s government watchdog agency released a study Monday advising lawmakers on the implications of ending or shifting liquor operations away from government-run stores and wholesale operations. A renewed interest in privatization also comes amid a recent separate state audit scrutinizing the costs in a key state Alcoholic Beverage Control Commission contract.

North Carolina is one of 17 states that directly control the sale and distribution of spirits. About 170 local ABC boards sell liquor at more than 430 stores, which by law can’t stay open past 9 p.m. daily or on Sunday.

The state ABC Commission also runs a warehouse where wholesale liquor from distillers is shipped to ABC stores for sale. Beer and wine are sold by licensed conventional retailers. State and local governments take in alcohol-related tax revenue.

Some lawmakers and at least one trade group consider the current system archaic and espouse a more market-based approach that would treat liquor like other sold alcohol.

“North Carolina residents have been saying it for years — they just want to purchase a bottle of liquor at the nearest grocery store like it’s done in most every other state,” the North Carolina Retail Merchants Association said in a news release Monday. The statement highlighted a poll showing support for selling liquor like beer and wine.

But others consider liquor consumption a health and safety issue that warrants the current government restrictions. They cite figures in the Program Evaluation Division’s report that said North Carolina, among all Southeastern states, collects the most public revenue per gallon of liquor sold and has the second lowest per-capita liquor consumption.

“Why would we ever want to be like those other Southeastern states?” asked Randolph County GOP Rep. Pat Hurley, a member of the legislative oversight committee hearing the report’s presentation.

The report doesn’t give an opinion on whether to shift from the state control, saying it should be considered by a separate House-Senate study panel.

In a divided vote, the oversight committee did back a bill also proposed by the report’s authors with incremental changes. They include forcing local ABC boards in the same county to merge, allowing local governments the option to open ABC stores on Sunday and offering free in-store liquor tastings.

The measure still would have to pass the entire House and Senate and be accepted by Gov. Roy Cooper to become law.

As for broader alterations, the report’s authors said there are many options and ramifications should the state move to licensing private stores to sell liquors. For example, nearly 2,900 state and local ABC workers — government employees — could lose their jobs, potentially resulting in more than $100 million in pension and other benefit obligations, the report said.

The report calculated replacement systems as licensing 1,000 new stores and point out a correlation between increased store proximity to residents and increased liquor consumption. And changes won’t necessarily result in cheaper overall liquor prices for consumers, the report said.

In 2010, elected officials decided against privatizing the system. Then-Gov. Beverly Perdue said the estimated one-time windfall from selling state operations wasn’t enough. She also frowned on letting liquor be sold in big-box retailers in the presence of children.

The General Assembly did approve some reforms that year which the study says increased overall system profits and profitability of local boards. ABC revenues distributed to state and local government also have gone up over the past decade to over $400 million.

In a written response to the report, state ABC Commission Chairman A.D. “Zander” Guy called the incremental recommendations “reasonable ideas to consider.” But he said the report’s findings about low liquor consumption in North Carolina and high revenues validate the current control system.