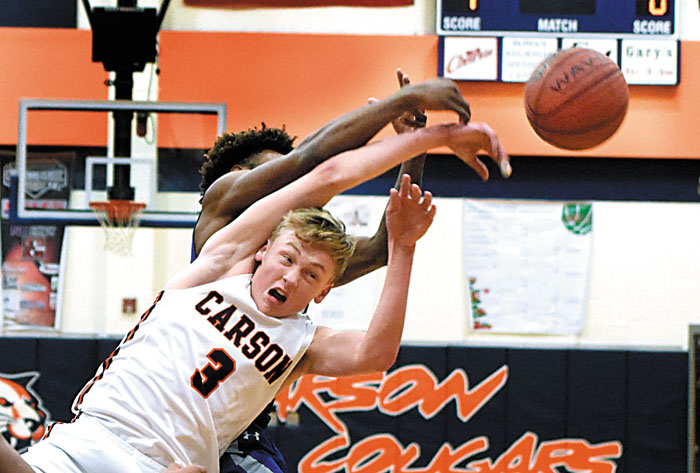 CHINA GROVE  — Carson’s boys did a lot of chasing defensively on Friday, and now they’re chasing Statesville in the North Piedmont Conference standings.

“Statesville is really tough to guard,” dejected Carson senior Cole Perry said. “We had a hard time staying in front of them.”

Unless East Rowan or West Rowan upsets the Greyhounds next week, Statesville took care of the NPC title with Friday’s fast-paced victory.

AJ Mauldin made five 3-pointers and scored 23 for Carson. Perry scored 21. Mark Spry’s 12 all came in the second half. Javon Smith had 11. A foul-plagued EJ Clark, who averages 16, scored only three.

“We scored it pretty well, but this one came down to defense,” Carson coach Brian Perry said. “We’ve got to play better defense than that. The opportunities were there to step in and draw charges, but we didn’t do it often enough. You can’t give up 82 and expect to win.”

Statesville finished a season sweep of the Cougars. Carson has won eight of its last 10 games, but both losses in that stretch were to Statesville. That provides an idea of just how hard to guard the Greyhounds are.

Statesville coach Sonny Schofield arrived wearing blue jeans, a flannel shirt and boots. His team also arrived in a mood to go to work. Carson’s game is drive-and-kick with Javon Smith doing the penetrating. Statesville’s defensive priority was cutting him off.

“The thing about Carson is they can shoot the ball from very deep, from 25 feet,” Schofield said. “That’s tough to defend, but we did a pretty good job of plugging gaps, of stopping their penetration for the drive-and-kick game. They still made some 3-pointers, but when they missed, we came up with very big rebounds.”

Statesville came at the Cougars with a lot of different weapons. Miykei Fields was hot early. Devante Knox got it rolling in the second quarter. Jeremiah Mott took over in the third quarter. Then all the Greyhounds made free throws in an endless fourth quarter. Statesville got 18 of its 24 points in the fourth quarter at the foul line to keep Carson at bay.

“That’s an area where we’ve struggled, but we did a better job on free throws tonight,” Schofield said.

Carson got down double-digits early, but appeared to have some momentum after Mauldin hit a 3-pointer to send the Cougars to halftime with a 38-33 deficit.

Then the teams played an even third quarter. The Hounds went up by nine, but Mauldin brought the Cougars back. Statesville led, 58-53, heading to the last eight minutes.

Early in the fourth quarter, Carson had two great looks, wide-open 3-point tries to get within two, but Clark and Perry missed. Then Knox got a stick-back for the Hounds, they knocked some free throws, and the lead went right back to double-digits.

“We had momentum, and that was a great chance right there to get within two,” Coach Perry said. “But then they pushed the lead back out on us, and we just couldn’t get enough stops. We couldn’t defend them without fouling.”

Spry made two 3-pointers in the fourth quarter, but the Cougars couldn’t make any kind of charge.

“Our intensity was a little better in the second half,” Cole Perry said. “But that’s a hard team to stop.”