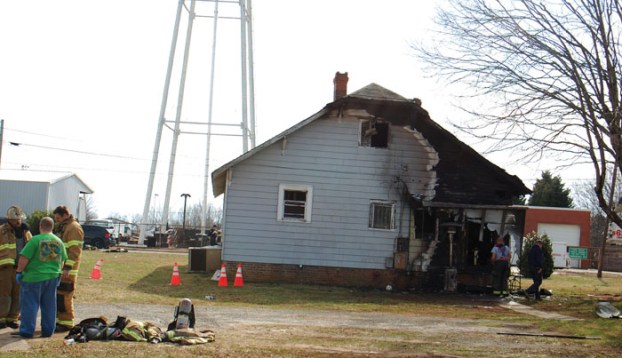 A fire significantly damaged a back portion of a house at 617 Salisbury St., China Grove, Sunday close to noon-time. No injuries were reported. A mother and her four children live in the dwelling. They reportedly were not at home when it happened. Mark Wineka/Salisbury Post

Fire investigators said Monday the causes of two weekend Rowan County fires — one at a China Grove home and the other at a barn — have not been determined.

The first fire destroyed a back portion of a home at 617 Salisbury St. in China Grove, displacing a mother and her four children. The fire call came in shortly after noon Sunday.

Fire investigators found the room where the fire started and initially thought the cause was a clothes dryer, but the dryer was later ruled out. There was no way to determine the actual cause, said Lt. David Sells of the Fire Division.

The house in China Grove is at Salisbury and Vance streets across from the China Grove water tower.

The occupants had gone to church then to a local restaurant when they were notified of the fire.

According to Bostian Heights and China Grove Fire Chief Mike Zimmerman, Reid Simmons owns the house and his daughter-in-law, Mackenzie Simmons, and her children lived there.

About 2:15 p.m. Sunday, firefighters responded to a fire at 807 Yost Road off Webb Road in Salisbury. The initial report was that a camper beside a metal, barn-like structure had caught fire. The fire quickly spread to the barn.

Morris said the owner had parked the camper beside the building the day before.

“We know that the fire started in the camper. The fire destroyed the camper completely and spread to the building. Since it’s destroyed, there’s no way we could tell what destroyed it,” Morris said.

Morris said the reason for the three-alarm status was because of the manpower.

Rockwell EMS station to be named for Frank Thomason