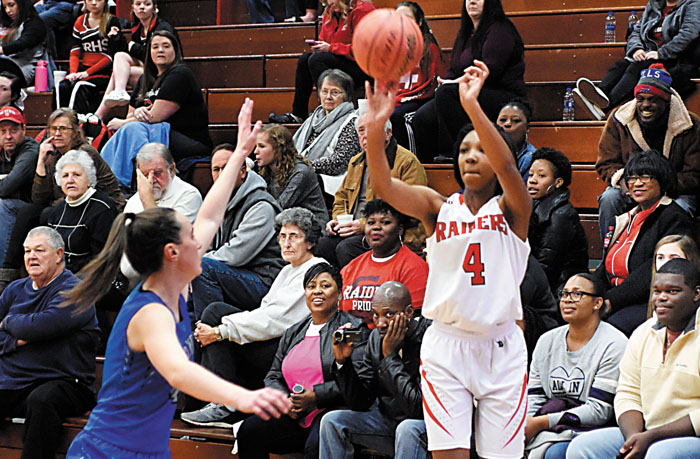 Downs scored 53 on Friday in a mind-boggling 61-60 loss to West Davidson.

“As far as the points, I just tried my best,” said Downs, who also had 14 rebounds, six steals and two blocks. “I’m still upset that we didn’t win the game.”

Not much is routine in the Central Carolina Conference where fifth-place West Davidson (12-6, 8-5) now owns a season sweep of tied-for-second South Rowan (11-8, 10-3).

It’s a wild, 10-team league. Two CCC games were decided by one point on Friday. Another was decided by two points.

South was minus No. 2 scorer Bethany Rymer. Rymer was out with illness, as were Carlie Moore and Paige Chabala, both of whom have started games this season.

“Bethany does a lot of the ball-handling for us, so without her, I knew my main job was going to be taking care of the ball, trying to cut down our turnovers and getting my teammates in the right places,” Downs said.

Weird things happened. South led by as many as 17 points, but couldn’t hold the lead. West Davidson, which dressed only seven healthy players, had a titanic 27-0 run over a six-minute stretch that bridged the third and fourth quarters — and was still fortunate to win.

Downs scored 19 of South’s 21 points in the second quarter as the Raiders pushed to a 34-25 halftime lead. Downs had 29 points at the break.

“We were getting a lot of fast breaks,” Downs said. “The first time we played West Davidson our problem was turnovers, but we were doing better with that.”

When South started the third quarter with a 10-2 run, the Raiders led 44-27. That was high tide for South.

South was still up 46-30 with three minutes left in the third quarter, but that’s when the Green Dragons’ amazing 27-0 run began. West Davidson, with the aid of a technical foul, scored the last 15 points of the third quarter to get within 46-45.

Then West scored the first 12 points of the fourth quarter to lead 57-46.

It looked over, but that’s when Downs got her second wind. The Catawba College signee scored all 14 of South’s points in the fourth quarter. Her driving bucket with 28 seconds left got the Raiders within 61-56. Downs made her only 3-pointer of the night to cut the Green Dragons’ lead to 61-60 with 12 seconds left.

West Davidson missed a 1-and-1  free throw with seven seconds left. Downs rebounded and took off with a head of steam. There was a no-call collision in the lane as Downs put up a shot, and another no-call when Downs’ stick-back attempt right at the buzzer was blocked by Karlie Cook.

“A couple of fouls could’ve been called on that last possession and there was a lot of contact when I made that 3-pointer,” Downs said.  “But you have to move on.”

Haley Lowe scored 26 and Cook had 21 for the Green Dragons.

“We certainly tried, and I emphasis the word tried, to slow (Downs) down,” West Davidson coach Jamie Payne told the Lexington Dispatch. “Our focus was on her. She’s a very versatile, athletic player. We attempted a triangle and one, and then a triangle and two with two of our girls on her. Once she made up her mind that she was going to the basket, she was either getting the basket or getting fouled.”

Downs, a 5-foot-11 guard who has totaled 135 points in her last three games, has scored 613 points this season, a program single-season record. She’s averaging 32.3 points per game — a county-record pace — and has 2,145 career points.

“My teammates didn’t score a lot, but I was extremely proud of all of them,” Downs said. “Not having Bethany tonight. they could have just said we didn’t have a chance and rolled over, but they gave everything that they had to win this game.  Defensively, my teammates couldn’t have given any more than they did.”

South is at home against Ledford (also tied for second place) on Monday.  South will be playing against Lyrik Thorne, the exciting Ledford guard who has broken the Davidson County career scoring record. Thorne also has signed with Catawba.