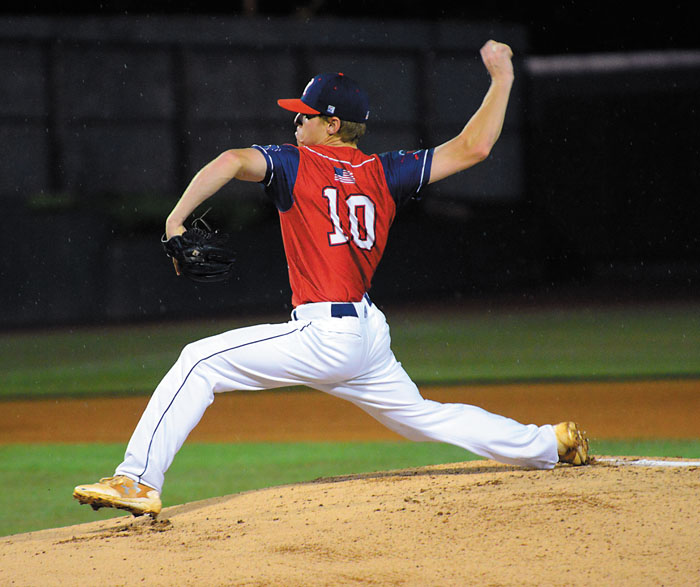 Rowan’s John Owen fires to the plate during a game against Greensboro on May 20, 2018. Owen has recently signed with Catawba. Photo by Wayne Hinshaw, for the Salisbury Post.

GREENVILLE, N.C. —  John Owen will be back at his home away from home at Newman Park for two seasons.

The Pitt Community College sophomore signed with Catawba’s baseball program recently. He’ll pitch the upcoming season at Pitt, where his teammates and coaches are counting on him, but he’ll be in a Catawba uniform for the 2020 and 2021 seasons.

There aren’t many Division II signings that could get more people excited. There are a lot of people who really like John Owen. They like who he is, and what he’s all about, and they also like the fact that he gets a lot of hitters out and wins ballgames.

“John is kind of a household name locally,” said Catawba head coach Jim Gantt, who coached Owen for four summers on the Rowan County American Legion team. “He’s also the ultimate team guy. He’s an ace pitcher who will put on a catcher’s mask and go warm guys up in the bullpen if that’s what you need him to do.”

Owen has been one of the best pitchers in Rowan Legion history, a storied program for which he’s pitched big state tournament games, bigger regional games and humongous, televised World Series games. He’s always been that guy who can keep his head straight in any situation against any lineup. That’s been true whether he’s facing Concord or Indiana.

In 2016, the summer Rowan made a run to the World Series, Owen was state tournament MVP.

“After pitching in the World Series, I don’t think there’s any situation I can ever face that will make me nervous,” Owen said. “I can push pressure to the back and concentrate on doing the job.”

“A lot of people are bigger and some of them throw harder, but he’s been Greg Maddux in high school and Legion, just carving hitters up,” Gantt said. “He doesn’t scare anyone when he walks out there to the mound, but all of a sudden it’s the eighth inning, he’s up 5-1, and you’re wondering where in the world did the game go. He’s very calm, very much in control on the mound.”

Owen won the Patrick Snider Memorial Award as the Rowan County Pitcher of the Year in 2016 and shared the award in 2017 with Carson’s Owen White. Coming out of high school, he had Division II offers, but his dream was Division I, and going to Pitt for junior college competition kept that option open.

“Pitt was the decision that I made, and I still believe it was the right decision at that time in my life,” Owen said. “I wouldn’t change anything. I certainly don’t regret going to Pitt. I’d do it 10 times over. I’ve gotten great instruction and I’ve had a chance to learn things from some different coaches. The experience of being away from home has been good for me. I think I’ve grown in a lot of ways.”

Owen said he had multiple offers to weigh in December, but none of them appealed to him as much as Catawba.

“I think signing with Catawba is probably the biggest decision I’ve ever made in my life,” Owen said. “I think every player wants a school to fall in love with him, and Catawba seemed more excited about me than anyone. And I’m excited about Catawba. My family has been driving to games at Pitt, and I know they’d come to see me wherever I was pitching, but it’s going to be nice for them to be able to come out to Newman Park. Obviously, I love the park and I’m very comfortable with the coaching staff and Catawba’s players. A lot of those guys have been Legion teammates.”

Newman Park can be a difficult environment in which to pitch college games. College hitters are bigger, stronger and more experienced than their Legion counterparts, and Newman Park has cozy dimensions. It can be a homer haven once the weather warms up.

“I’ve watched plenty of college games there, and I know how the ball can fly, so I’ll have to keep it down,” Owen said. “I think I’ve got enough experience there that I’ll be able to turn Newman Park into an extra home-field advantage, not a disadvantage. There’s no reason to change who I’ve always been.”

Who he’s always been has a made him a household name.

“He’s coachable and he’ll be a great teammate,” Gantt said. “He’s a guy who works hard at baseball every day.”