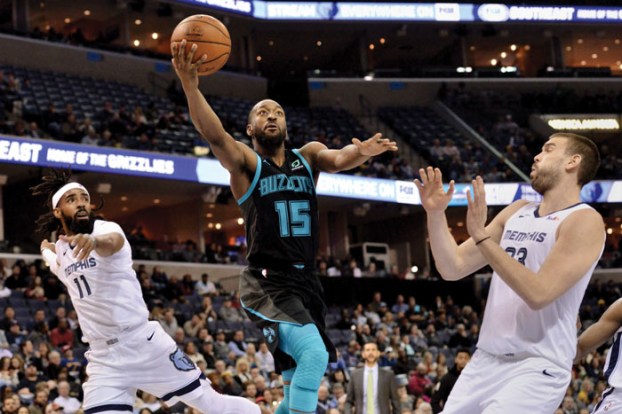 By STEVE REED, AP Sports Writer
CHARLOTTE (AP) — Hornets point guard Kemba Walker can’t imagine what the atmosphere will be like when he’s introduced as an NBA All-Star game starter next month on his home court.
“I haven’t given it any thought, but I’m sure it will be an unbelievable moment being that the game is in Charlotte,” Walker said. “I’ve been here for eight years now, so it’s going to be crazy.”
The 28-year-old Walker was named to the All-Star team for the third time Thursday, but it was his first selection as a starter.
He becomes another big story line for the All-Star weekend, along with Stephen Curry returning to the city where he grew up, and former North Carolina college basketball star and current Hornets owner Michael Jordan hosting the game in his own state.
Walker didn’t win the fan vote, finishing third among Eastern Conference guards behind Kyrie Irving and Dwayne Wade. It was the media and his fellow NBA players — both picked him second, ahead of Wade — that got him over the top and earned him the start.
“The respect from my peers is what means a lot to me,” Walker said. “The guys I go up against each and every night. You know, to have their respect, I think that’s huge. And that’s what I care most about, to have the respect of my peers.”
Walker is set to become a free agent after this season, but has repeatedly said he wants to return to the Hornets, where he is the franchise’s all-time leading scorer.
Walker is averaging a career-best 25 points this season along with 5.7 assists and 3.8 rebounds.
His 3-point shooting has dipped to 35.8 percent — down from 38.4 percent last season — but he is still the man carrying the load for the Hornets night in and night out.
“I feel very deserving,” said Walker, who is listed as a generous 6-foot-1. “I’ve been playing really well this season. Yeah, I feel like I deserve to be in the position I am today and I think that is why I am. I don’t think they would (give) a starters position in the All-Star Game to a guy who doesn’t deserve it.”
Walker said he hadn’t even been thinking about being named an NBA All-Star starter the past few weeks.
He said a few family members had pointed it out to him that he was third in the voting, but Walker said his focus has been on the season and helping Charlotte get to the postseason.
The man who once walked off the court early this year after a game-winning shot shouting “This is my city!” is now the toast of the town in Charlotte.
“It’s up there,” Walker said of the accomplishment. “I don’t know where to put it yet, but it’s pretty high on the accomplishments in my career. This one right here is definitely top of the line, man. It’s an unbelievable accomplishment.”
He said his first NBA All-Star selection in 2017 was special, but this one might be more important.
“I don’t know if a lot of players can actually say they played in the All-Star Game in their actual city, their team’s city,” Walker said. “It is definitely up there with my first for sure.”
___
More AP NBA: https://apnews.com/NBA and https://twitter.com/AP_Sports

By STACEY PLAISANCE, Associated Press NEW ORLEANS (AP) — A New Orleans bakery is turning out thousands of cookies with a... read more