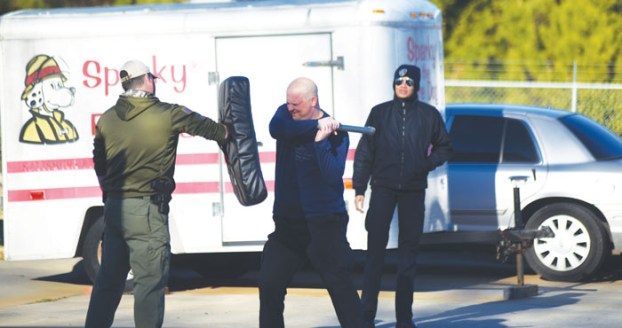 SALISBURY — In January 2017, the Salisbury Police Department had 18 vacancies, prompting Chief Jerry Stokes to request competitive pay and more positions from the City Council. Currently, the department is fully staffed, but it recently asked for six additional positions that were approved.

When Sgt. Corey Brooks, the training and recruitment manager, began last February, he was met with some retirements and other departures. The department was down 16 people out of 81 sworn positions.

Stokes tasked Brooks with the goal of meeting full capacity by December, which he did.

Brooks said he took on the challenge and made it his mission to get quality candidates in those positions. He was able to fill the vacancies before Christmas.

“He’s out there in the trenches,” said Capt. Brian Stallings, who oversees the recruitment division.

“My job is not done. Our goal is to make sure we never drop below when it comes to staffing,” Brooks said.

The veteran officer said he is happy to see the vacancies vanish.

Breanna Lusk is one new officer.

Lusk, who was raised in Salisbury, wanted to go into a career in which she could help people. Both of her parents are in the military, which inspired her to get into law enforcement.

She contacted Brooks about applying. She was hired in August before taking Basic Law Enforcement Training.

“Sgt. Brooks was definitely proactive with the recruitment process. It’s a really great experience to go through that process,” Lusk said.

Brooks credits attending career fairs and just talking to people about the benefits of the job. Before Stokes and Deputy Chief Shon Barnes’ requests for more positions and additional funding, the Salisbury department didn’t offer salaries that were competitive with nearby departments. The department has now exceeded the starting salary of much bigger departments.

Brooks said he believes one of the reasons the department has been able to fill some of those positions is because of its hiring process. The process, though not unique to law enforcement agencies, allows the department to hire potential employees conditionally prior to them taking basic training. If they succeed, the job is offered.

He said the department also has been able to hire officers using word-of-mouth from other recruits.

Officers were stretched thin to fill in for vacancies and it led to low moral, but Brooks said morale has improved significantly and the workload is more evenly spread.

He said many officers are young and obviously have less experience than veteran officers, but it also means they are able to train in a way that’s conducive to working at the Salisbury Police Department.

Brooks said the new officers have been enthusiastic and eager to learn.

Israel McCants, a newly hired officer who is originally from Charlotte, said he heard about Salisbury police through a co-worker. He had already taken basic training. Brooks contacted McCants and the two spoke about employment with the Salisbury department.

He still is mentored by Brooks, who will often give him “pointers,” McCants said.

McCants said he likes that everyone is like family and all are treated equally.

Earlier this week, new recruits as well as some veterans conducted pepper-spray training. Officers learned to use pepper spray, what it feels like to get sprayed and how to continue functioning while under the effects.

Efird and other supervisors took turns spraying the officers, with eyes closed. They maneuvered through obstacles including punching and kicking a pad held by another officer. Officers then went through a decontamination process. The effects typically wear off within an hour.

Once the officers are hired, Brooks acts as a mentor to help them transition into the job. The new officers are assigned to a field training officer.

Brooks said he credits his predecessors, including Lt. Lee Walker, with laying a great foundation and helping him learn the ropes of recruiting.

Brooks said Officer Jasmine Suber has also been a big help with processing paperwork for recruits.

SALISBURY — Through five community-input sessions, 11 days of online surveying and 15 emails, members of the Rowan-Salisbury community have... read more