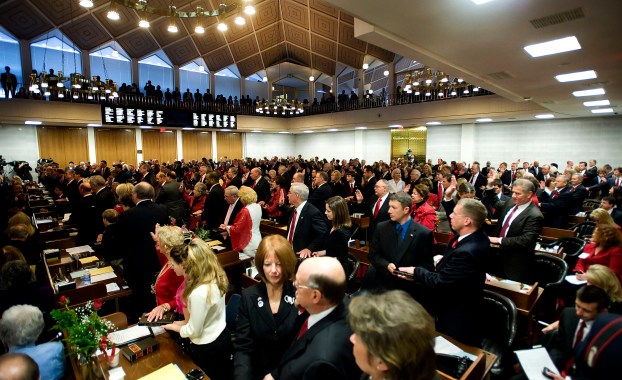 RALEIGH — North Carolina Republicans lost their General Assembly supermajorities in the 2018 midterms, and the GOP nationally lost ground in legislatures and governorships after years of dominance in state capitals. So, as state lawmakers begin their 2019 sessions, should we expect dramatic changes in state policy?

Republicans currently control 31 legislatures (including the officially nonpartisan but operationally conservative Nebraska legislature). Democrats control the legislatures in 18 states. Just a single state, Minnesota, has one Democratic and one Republican chamber. As for state governors, Republicans suffered a net loss of six in 2018 but still comprise a majority at 27 to 23.

Here’s the bottom line. In 23 states, the GOP has a “trifecta,” meaning a governor and full legislative control. Democrats have 14 such strongholds, while North Carolina and 12 other states have split control. These figures represent gains for Democrats at the expense of Republicans, but not gigantic ones.

According to recent reporting from outlets that cover these issues, such as Governing magazine and the Pew Charitable Trusts’ Stateline project, many of the major legislative battles of 2019 will likely represent continuations of pre-existing conflicts in state capitals over tax policy, education funding, Medicaid expansion, and voting laws.

Generally speaking, Democrats in state capitals are trying to raise taxes to fund additional spending. Republicans are trying to block this, and in some cases to reduce and reform taxes to spur economic growth and expand freedom.

While at the national level Democrats talk mostly about raising income taxes on the wealthy, at the state level they often focus on sales or excise taxes, particularly on energy, tobacco and beverages. Indeed, some Democratic governors and legislators are trying to use new state tax policies to offset the effect of last year’s elimination of the federal income-tax deduction for state and local taxes paid. The direct beneficiaries of such state “workarounds” will be wealthy households, for the most part, although Democrats are (properly) worried that unless they address the issue, many such households will depart for lower-tax jurisdictions, thus imposing broader pain on blue-state economies.

On the spending side of the ledger, both parties typically earmark education to receive the bulk of any new revenues, either to increase teacher pay and reduce class sizes in K-12 schools or to stave off tuition increases at state colleges and universities. For example, big promises on education funding helped propel two new governors to office in competitive elections last year, Democrat Laura Kelly in Kansas and Republican Brian Kemp in Georgia.

Democrats typically seek to outbid Republicans by pitching tax hikes the latter won’t countenance. Most voters favor higher taxes to boost education expenditures in the abstract, but support drops when voters are informed how much their states already spend. The messaging war about taxes and education dominated many state elections in 2018, and will continue to do so.

Most states have now expanded Medicaid under the Affordable Care Act, with Idaho, Nebraska, and Utah doing so by referendum in November. In the remaining holdout states, a powerful alliance of medical providers and left-wing activists will deploy its considerable resources again in 2019, offering to negotiate with GOP lawmakers.

As for voting laws, look for a conflict of ironies in state capitals. Citing North Carolina’s own disputed election in the 9th Congressional District, Democrats accuse Republicans of paying too much attention to in-person fraud while ignoring potential misdeeds with absentee ballots. For their part, Republicans point out that Democrats are actively promoting in many states the very “absentee-ballot harvesting” practices that are alleged, and currently illegal, in our state.

North Carolinians no doubt will see a lot that was familiar here. When it comes to state policy disputes, there may be regional differences in accent, so to speak, but not so much in vocabulary.

Darts and Laurels: Sue Carroll’s actions provide a lesson for all

Laurel to Sue Carroll, whose act of kindness sought to provide comfort to those dealing with glioblastoma, a type of... read more