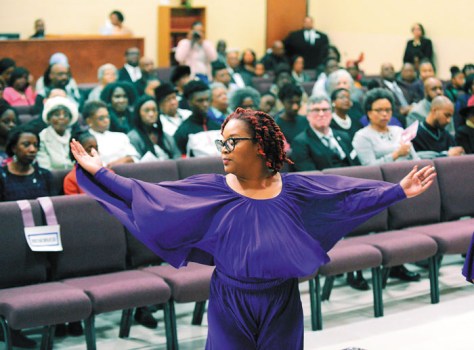 The Mount Zion Dance Ministry presented a creative dance at the MLK Humanitarian Award program. photo by Wayne Hinshaw, for the Salisbury Post 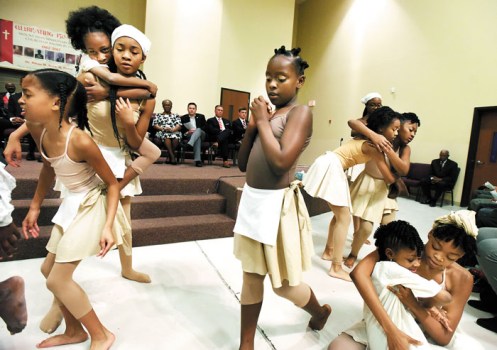 The Triple Threat Dance team presented " A Tribute to Harriet Tubman" at the MLK Humanitarian Award program. photo by Wayne Hinshaw, for the Salisbury Post 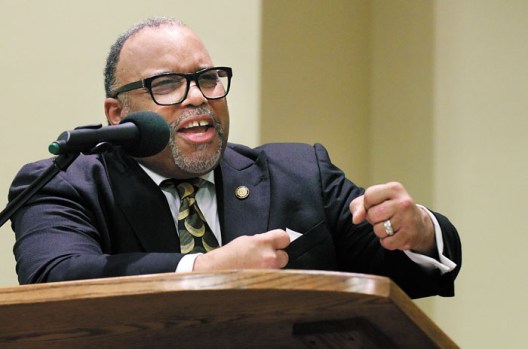 The speaker was Rev. Dr. Paul A. Lower, Jr. from Shiloh Baptist Church in Winston Salem at the MLK Humanitarian Award program. photo by Wayne Hinshaw, for the Salisbury Post 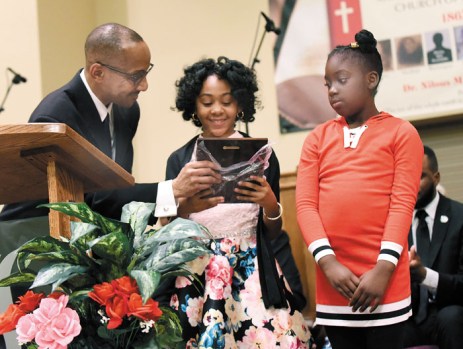 Rev. Dr. Nilous Avery presented a humanitarian award to Brooklynne Witherspoon and Zriyah Brown for their work with "A Bridge 4 Kids "at the MLK Humanitarian Award program. photo by Wayne Hinshaw, for the Salisbury Post 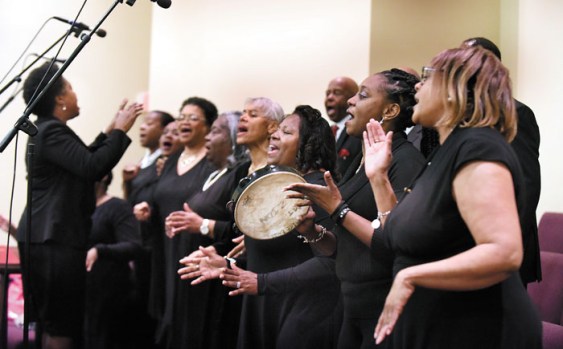 The United Spirit Mass Choir presented the music at the MLK Humanitarian Award program. photo by Wayne Hinshaw, for the Salisbury Post

SALISBURY — Elsewhere in the country, people are focusing on divisions along party lines, but Sunday afternoon in Salisbury, locals focused on the things that brought them together.

And those gathered Sunday viewed it as a personal calling to give of themselves for the betterment of others.

“Never, ever forget it is our — I repeat, our — responsibility to keep the dream alive for the betterment of all people,” said Nicole Avery, first lady of the church.

The event celebrated the life of King, and the hard work done by other great civil rights leaders who helped bring equality to all people. Special presentations included dances by the Mount Zion Dance Ministry Creative Expression and Triple Threat Dance Company, and an original spoken word poem performed by student Robyn Rivers.

Keynote speaker Rev. Dr. Paul A. Lowe, Jr., spoke briefly about the life of King, and of the work still to be done.

Lowe is the pastor of Shiloh Baptist Church in Winston-Salem, and serves as a state senator representing North Carolina’s 32nd district.

While King made a lot of progress in his life, Lowe said, much of his work was left unfinished.

People are still fighting for access to resources, schools are again leaning towards segregation, legal protections are being rolled back, there is still workplace discrimination and some people are still working multiple jobs to make ends meet. With that in mind, Lowe asked audience members a very important question: “What would Dr. King have us do today?”

While he couldn’t say for sure, Lowe said he had a few ideas. First and foremost, he said, he believed King would encourage people to register to vote.

He also believed that King would want people to stop tearing each other down, and to join together in the fight against poverty.

“At some point we’ve got to work together so that everyone can flourish,” he said.

Local elected officials attended the ceremony, and spoke briefly about the importance of speaking against injustice and on the importance of unity. Salisbury Mayor Al Heggins could not attend due to a family emergency, but sent short remarks, which were delivered by city councilwoman Karen Alexander. Heggins said she was proud of her fellow residents for their determination to speak out against things that were wrong or unjust.

“I’m grateful to live and serve in a community that refuses to be silent,” she wrote.

Chair of the Rowan County Board of Commissioners, Greg Edds, spoke briefly about the importance of finding things that connect, rather than divide us. Even if people disagreed, he said, it was important that they learned to work together, and to remember “what scripture says — love your neighbor as yourself.”

Jenkins said it was important to speak out against wrongs, and for people to work together towards an environment that “frees those of us who are bound by silence.”

It was these qualities, and more, that distinguished this year’s recipients of Mount Zion Missionary Baptist Church’s Humanitarian Awards.

Click here to view more photos from the awards ceremony.