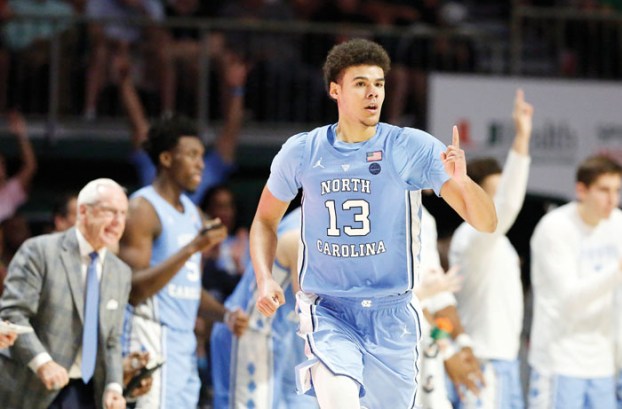 North Carolina guard Cameron Johnson gestures after scoring during the second half of an NCAA college basketball game against Miami on Saturday, Jan. 19, 2019, in Coral Gables, Fla. (AP Photo/Brynn Anderson) 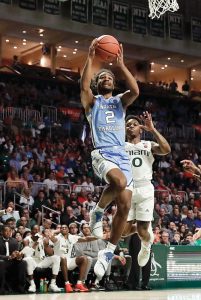 The next trip down the court, Johnson shot over Lykes again.

Johnson’s back-to-back 3-pointers gave the No. 13-ranked Tar Heels the breathing room they needed, and they outlasted outmanned Miami 85-76 Saturday.

“It wasn’t like, ‘Shoot over Lykes. Hey, he’s short,’” Johnson said. “But when you’re in the moment and you’ve got a clear view of the basket, it’s a pretty nice opportunity for you. It’s hard for him to get up there and contest.”

After Johnson scored twice, teammate Kenny Williams added a pair of 3-pointers, giving the Tar Heels four treys in a span of five possessions — all over Lykes.

“They’re good players,” Lykes said. “They’ve got the ability to shoot. They hit a few.”

The Tar Heels (14-4, 4-1 Atlantic Coast Conference) shot 55 percent, including 9 for 20 from beyond the arc. They made at least half their shots for first time in eight games.

“Did they miss a shot in the second half? I don’t remember if they did,” Miami coach Jim Larranaga said facetiously. “That was a terrific performance by North Carolina, and a valiant effort by our guys.”

The Hurricanes (9-8, 1-4) led in the second half for the 16th time in 17 games but faded at the finish, as has been a tendency. Their seven-man rotation made it difficult to stay with the deeper Tar Heels.

“In the last eight to 10 minutes, Carolina was rolling and we were drained,” Larranaga said.

Along with being deeper, the Tar Heels were taller. They rank second in the nation in rebounds and enjoyed a 38-23 advantage on the boards. Luke Maye had nine rebounds, and Johnson and Garrison Brooks each grabbed seven.

Johnson went 5 for 7 from 3-point range after going 0 for 7 beyond the arc in his previous two games. One shot in particular won Larranaga’s admiration.

“I turned to my bench and said, ‘Wow, that was nasty,’ Larranaga said. “He was closer to midcourt than he was to the foul line.”

There were 18 lead changes, but the last came with 17 minutes to go, and White hit Brooks with an alley-oop pass for a dunk that put the Tar Heels ahead to stay.

North Carolina freshman Nassir Little had his second strong game in a row with 12 points in 13 minutes. That follows a three-game stretch where he shot 5 for 17.

“I think I took a really big step forward,” Little said. “It’s easy to get discouraged. The coaches have helped me get through tough moments. I’m trying to figure things out and get better.”

North Carolina improved to 3-0 on the road in the league, but coach Roy Williams wants more sense of urgency from his team.

The game was announced as a sellout, but there were hundreds of empty seats in the attendance-challenged Hurricanes’ 8,000-seat arena. The student section was sparsely populated for the noon start on a sunny, 75-degree afternoon.

North Carolina plays host to Virginia Tech on Monday. A year ago the Hokies upset the Tar Heels, who were ranked 10th at the time.

The Hurricanes, who haven’t won an away game since November, play Thursday at Syracuse.