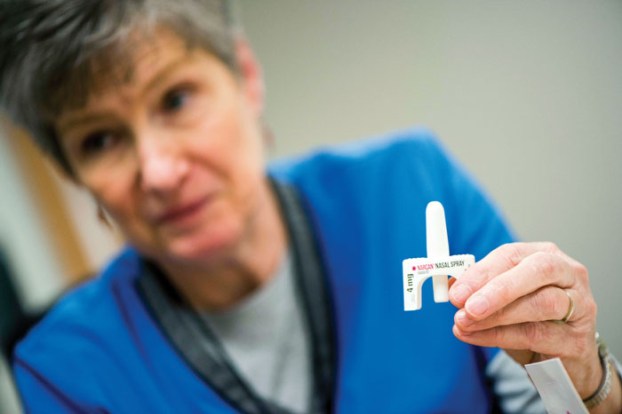 JON C. LAKEY / SALISBURY POST Mary Alice Brewer, a registered nurse at the Rowan County Health Department, explains the contents and the procedure for using the Narcan Kits that the health department gives out for free for people requested one. The kits that contain the Narcan comes with instructions, and other education material to instruct a person addicted to opioids to find help to stop using the drugs. Salisbury, North Carolina 1/16/19

Fight for opioid use continues: Overdose numbers are down, but abuse is still rampant

Public health officials also say they hope several local intervention initiatives that are in place will aid in decreasing the overall number of people using opioids and opioid-related deaths.

The ER doctor said he believed public awareness was one of the contributing factors for the decline.

“I see this issue getting worse in the nation instead of better,” Oliver said.

She noted that recently according to the National Safety Council, for the first time ever, the odds of dying from an opioid overdose is greater than dying in a motor vehicle crash.

In addition, the average American lifespan has fallen for the third year in a row due to opioid overdoses and suicide. According to the Centers for Disease Control and Prevention, nearly 70,240 Americans died of drug overdoses in 2017, compared to about 63,630 during the previous year.

“The amount of babies born with substances in their system has also increased sharply in North Carolina and in Rowan County. These children are now at-risk for multiple problems including medical, mental, and behavioral health issues throughout their life,” Oliver said.

Oliver has been very vocal about substance abuse prevention and what she believes led to the death of her younger sister who died at the age of 36 from cardiac arrest.

She said although the death certificate stated cardiac arrest, her sister had an extreme dependency on pain pills and heroin.

“Although it’s not definitive, the reality is she probably went into cardiac arrest from using,” she said.

The Public Health Department has held two community forums — one in 2017 to bring awareness to public officials about the opioid epidemic and the second in 2018 to provide information for the public about opioids.

Oliver advocated for the Rowan Public Health Department providing free Narcan kits to anyone who showed a need.

Oliver said the question then becomes do public health departments and other agencies continue to give Narcan for free or let people die?

“My problem with that is dead people cannot go to treatment and then recovery. As long as we have access to Narcan and can secure it, it will be provided for free to families that present a need,” she said.

There are debates on whether Narcan should be restricted. Some opponents say individuals should only be given the opioid reversal drug once or twice.

“But it’s not unusual for people to relapse six, seven, eight, nine, 10, 11 times or more before they are clean. It is not our job to determine how many rounds of life-saving Narcan they can have. It’s our job as public health officials and servants to the public to help prevent additional addiction and help provide resources and help to those that are already struggling with it,” Oliver said.

Oliver believes one of the reasons why it’s so difficult to deal with is the old mentality that “it is not our problem, it’s theirs,” she said.

She said in fact, the local opioid epidemic is actually a community problem.

It takes at least one spray of the opioid reversal drug Narcan to undo the effects of heroin or other similar opioids.

The overdose rates for people reporting to the ER in Rowan County and the state have gone down over the past last three years, said Neetu Verma, a grant manager for the Center for Prevention Services.

She attributes the downturn to the availability of Narcan and the introduction of the Good Samaritan Law, which says that anyone who helps a person who has overdosed will not face arrest.

“That’s a promising thing that we are able to save lives, but our jobs don’t end. We need to help those individuals who we have helped save lives with treatment,” Verma said.

The idea is that those who go to public health agencies for Narcan, other available services like syringe exchanges or for educational material are connected to ways to seek treatment.

Currently, there are several initiatives the Public Health Department and Center for Prevention Services along with community partners like Cardinal Innovation, Novant Health, Rowan EMS, YSUP, Rowan DSS, law enforcement have been collaborating on to get ahead of the issue, Oliver said.

As of September, there are 30 active syringe exchange programs in the state and the Rowan County Board of Health has begun the conversation to began such a program.

“We are not promoting the use, but we are trying to start a conversation with individuals who come to exchange, to help them connect with treatment services,” Verma said.

A comprehensive resource directory for substance use and mental health providers has been compiled. The directory, once completed, will be available on the Health Department’s website and distributed out in the community.

Each month, area stakeholders and decision-makers have began gathering as part of a substance use task force to strategically plan and collaborate on meeting demands that the Rowan County community is facing as it pertains to the opioid crisis. This task force is represented by Rowan EMS, the Rowan County Sheriff’s Office, the Rowan Public Health Department, Rowan Social Services, the county Co-operative extension services.

There have been two forums and a third one is planned for spring or summer. The goal is to keep the conversation going and make available community resources.

Collaborators are also working on harm reduction education that would see community members and professionals attending various health-related events and conferences. The Center for Prevention Services held an education seminar at the hospital.

A billboard was erected to promote safe storage and disposal of prescription medications. There are also 13 permanent medication drop box locations throughout the county.

In addition, pharmacies have been provided with handouts and magnets listing permanent drop boxes locations. The Youth Substance Use Prevention (YSUP) coalition received a partnership for success grant to be able to distribute lock boxes and chemical disposal kits to attendees at local health fairs held at Rowan-Cabarrus Community College and Catawba College and at other similar community events.

“It’s about educating the students and staff members on safe storage of prescription medications and safe storage. We invited folks already in recovery who could create an impact,” Verma said.

Verma said take-back events are held several times a year while local municipalities and the Rowan Sheriff’s Office collect medications from the boxes as needed.

Last year, between January and December 2017, a total of 2,735.12 pounds of medication was collected throughout the county.

This past year, lock boxes were given away for free at an Intimidators baseball game. The event was in a joint collaboration between Cabarrus and Rowan counties.

Those in the community who are not able to drive to discard their medication in a drop box were given chemical disposal kits. The state provided funding to give away the disposal kits.

Another initiative is the overdose map training, which can be downloaded to a cellphone to report overdoses in Rowan County. Once a overdose occurs, emergency personnel enter some data and that data will aid in planning overdose interventions. The mapping system is in collaboration with the High Intensity Drug Trafficking Area.

Verma explained that the tool is meant for the Health Department staff, Rowan EMS and first responders.

Just recently, the Rowan County Health Department was awarded a $285,326 grant for the implementation of Post Overdose Response Team (PORT). The grant is sponsored by Blue Cross Blue Shield of North Carolina. The award is for a two-year period beginning this year and ending in 2020.

The Rowan County Health Department, in collaboration with Rowan County Emergency Medical Services and the Center for Prevention Services will partner to establish the PORT team which will intervene directly in the affected communities to provide outreach and support. The team will assist both active users, and those further along in the recovery process, by providing peer counseling, group therapy and other support.

“With the provided funds we can launch a coordinated campaign implementing a strategy which has been successful in other  communities that will help in decreasing the number of deaths and repeat overdoses due to opioid misuse,” Oliver said.

“This grant will enable us to do more ‘boots on the ground’ work in addition to all the other items we have been working on through the Substance Abuse Task Force (formally the Opioid Task Force),” she said.

The goal is that by 2019, law enforcement will be trained on harm reduction and Narcan administration.

The task force is working to schedule training sessions at the health department. These training sessions will be open to people actively using, in recovery and professionals. The sessions, which will be possible through collaborations with Cardinal Innovations member engagement, will be geared toward treatment, prevention and recovery.

Other plans include a health conference that will focus on educating individuals on harm reduction and syringe exchange, peer specialist support groups that would meet once a week for about an hour and the creation of the Substance Use Network (SUN).

The network would connect pregnant women with treatment, services and other available resources and support.

“We will continue to work to provide help and assistance to individuals that are actively using and family members and friends that are impacted by their loved one’s addiction,” Oliver said.

For more about prevention and substance use contact the Rowan County Department of Public Health at 704-216-8777.

Granite Quarry will talk to candidates for interim town manager

By Mark Wineka mark.wineka@salisburypost.com GRANITE QUARRY — The Board of Aldermen plans to interview at least three candidates for interim... read more