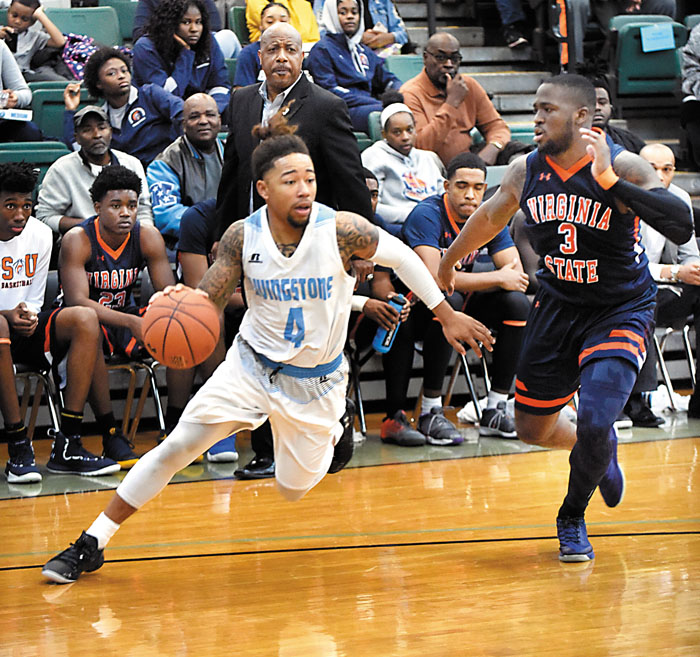 SALISBURY — It must have been “Don’t Mess With Roger Ray Night” at New Trent Gym on Saturday.

The Livingstone junior did everything but hawk popcorn at halftime, propelling the Blue Bears to a 79-69 CIAA victory against league-newcomer Claflin. Ray shot 9-for-14 from the field, made six 3-pointers and scored a season-high 33 points — including the 1,000th of his collegiate career.

“We’ve been so fortunate to have Roger as a student-athlete here at Livingstone,” coach James Stinson said after the resurgent Blue Bears (10-6, 3-4, 1-0) won their third straight. “He had some Division I opportunities, but ended up here. And since landing he’s had plenty of opportunities to leave, but he stayed.”

Ray’s loyalty has been mutually rewarding. A 5-foot-9 point guard from Raleigh, he added eight assists and two steals while boosting his scoring average to a team-best 19.6 points-per-game.

“Roger Ray is a ballplayer, a gamer,” said sixth-year Claflin coach Ricky Jackson, a Virginia Union graduate and CIAA legend. “He’s a three-year starter who has proven he can play.”

Ray seemed to achieve instant liftoff against shorthanded Claflin (6-11, 5-7, 3-3), which left eight players home in Orangeburg, S.C. for disciplinary reasons. He made plays and threaded passes that taxed belief, draining three 3-balls and scoring 11 of LC’s first 12 points in the opening seven minutes. By halftime he had 19 points — and the Blue Bears owned a 35-33 lead. Most exhilarating was the alley-oop pass he inbounded to 6-10 sophomore Lydell Elmore for an earthquake jam that snapped a 30-30 tie.

“It was actually a play that we got wrong the last two games,” Ray said. “We had people going the wrong way, doing the wrong things. We fixed it (Friday) in practice. It’s a simple play.”

Elmore, who contributed a double-double (11 points, 11 rebounds), flushed down one of his signature dunks like he was handing out business cards. “I’m the one that called that play,” he noted. “We made eye contact and because of their help-side defense, I was wide open.”

Claflin used 3-pointers by Noah Jenkins and Cornellius Reynolds to reclaim the lead early in the second half. LC responded with a 12-2 scoring spree and went up, 50-43, when Ray fed a 30-foot stretch pass to Malik Smith on a runaway layup with 14:29 to play. Seven minutes later, Ray accepted a flip pass from Kenny Grant and beamed in a 3-ball from deep in the right corner to reach 1,000 career points.

“Kenny already had the ball in the corner,” said Ray, who shot 6-for-8 from long distance. “I just ran behind him and he gave the ball for an open shot.”

In the closing moments, Ray continued to dominate the way a rooster rules the farmhouse. Claflin, which trailed by as many as 11 points, rallied within 69-66 on a pair of Triston Thompson free throws with 4:21 to play. Then came successive, crowd-pleasing slams by Elmore a minute apart — each off  deceptive, in-the-paint passes from Ray.

“That was Roger creating for other people,” Stinson said. “We really appreciate him.”

Yet Ray, the CIAA’s second-leading scorer, was quick to credit Elmore for his show of strength. “I remember a couple of plays before those,” he said. “I was really giving it to him about effort. But instead of getting mad at each other, we responded on the floor. We stayed together, focused. I keep telling him what a big-time player he is. He’s just got to embrace it.”

Jackson, meanwhile, said he felt good about his team, all things considered. “I’m frustrated because my guys played hard but missed some assignments on defense,” he said. “We lost sight of (Ray) a few times, and on those jams we weren’t paying attention to our defensive rotations. You’ve got to sit down and guard.”

Livingstone shot 43.6 percent from the field and went 8-for-14 on 3-pointers. Claflin connected on 45.1 percent of its attempts but went a dismal 3-for-17 from long range. The Blue Bears limited the Panthers to one field goal in the last 5:48.

“Changing up defenses midway through the shot clock also helped us a lot,” Stinson said. “It stalemated them and led to contested shots and more rebounds. It’s good because we’ve got this pointed in the right direction now.”

NOTES: Livingstone won the rebounding battle, 40-25. … The win capped a 3-0 week for LC that included victories over Chowan and Morris. It hosts Fayetteville State on Wednesday night. … Claflin has lost four of its last five games. It was paced by redshirt freshman Trent Rolle, who scored a career-high 18 points in his first game of the season. Thompson added 15 points and four assists.