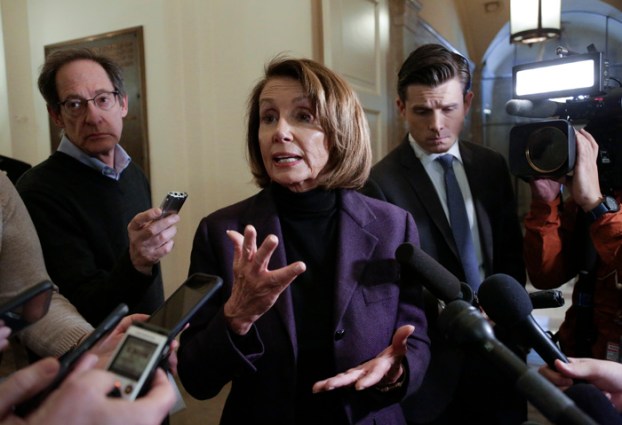 WASHINGTON — House Speaker Nancy Pelosi accused President Donald Trump on Friday of putting her and fellow lawmakers in danger by publicizing their travel plans to Afghanistan, forcing them to abandon the trip, a breathtaking allegation from a House speaker against a president as their feud escalated and the government shutdown dragged on.

Pelosi also accused the administration of leaking her plans to travel commercially to Afghanistan after Trump denied the use of military aircraft. She said the State Department determined that because Trump publicized the trip, it could no longer be made without endangering the safety of lawmakers as well as of troops and support personnel.

“You never give advance notice of going into a battle area — you just never do it,” Pelosi said. “Perhaps the president’s inexperience didn’t have him understand that protocol. The people around him, though, should have known that, because that’s very dangerous.”

Trump has not traveled to Afghanistan; a Dec. 26 trip to Iraq was his first and only trip to a combat zone.

The White House rejected Pelosi’s allegation. “The idea we would leak anything that would put the safety and security of any American at risk is an offensive flat-out lie,” said spokesman Hogan Gidley, who argued that if the lawmakers booked flights to Afghanistan, their travel would have been known.

The bickering between Trump and Pelosi has emerged as proxy war in the record-breaking partial government shutdown, which entered its 28th day Friday. Both parties are seeking to use their leverage to inflict pain on the other — and send messages that they believe will drive public opinion in their direction.

For Pelosi and Democrats, that means portraying Trump as a fickle and petty leader willing to hold the livelihoods of 800,000 federal workers hostage for an ineffective border wall. For Trump and Republicans, that means casting Pelosi and Democrats as supporters of “open borders” who are unwilling to even negotiate on strengthening needed security.

Meanwhile, there are growing signs the sustained shutdown is having a negative impact not only on unpaid workers but the economy, as well. Federal Reserve Bank of New York President John Williams on Friday said the shutdown has created “headwinds” to economic growth, and a key measurement of consumer confidence — released by the University of Michigan — has fallen to its lowest level of Trump’s presidency.

This week’s back-and-forth kicked off Wednesday when Pelosi wrote to Trump and suggested that he reschedule his planned Jan. 29 State of the Union address because of security concerns prompted by the shutdown. Trump on Thursday told Pelosi in a letter that he was postponing her previously scheduled Afghanistan trip, calling it a “seven-day excursion” and “public relations event” to Belgium, Egypt and Afghanistan that could not be accommodated during the shutdown.

In fact, it was a four-day weekend trip to Afghanistan with a brief stop in Brussels.

“Obviously, if you would like to make your journey by flying commercial, that would certainly be your prerogative,” Trump wrote.

Meanwhile, there has been virtually zero bona fide negotiating underway on a solution to the deadlock. The handful of lawmakers present in the Capitol on Friday — most having left town for the weekend or longer — expressed exasperation over the whole affair.

“I think it was irresponsible for Nancy Pelosi to cancel the State of the Union, and then I think it was wrong for the president to cancel the plane,” said Sen. Rob Portman, R-Ohio. “I think they’re both making it more difficult, not easier, for us to find a resolution to this impasse.”

After news of the canceled Afghan trip circulated, Trump tweeted an apparent rejoinder to Pelosi on Friday morning: “Why would Nancy Pelosi leave the Country with other Democrats on a seven day excursion when 800,000 great people are not getting paid. Also, could somebody please explain to Nancy & her ‘big donors’ in wine country that people working on farms (grapes) will have easy access in!”

Trump’s reference to “easy access” appeared to refer to a willingness to negotiate a guest worker program for the agriculture industry. The White House declined to offer on-the-record comment.

The administration also moved forward Friday with a broader crackdown on congressional travel: Acting White House Budget Director Russell Vought said in a memo that “[u]nder no circumstances during a government shutdown will any government owned, rented, leased, or chartered aircraft support any congressional delegation, without the express written approval of the White House chief of staff.”

No other executive branch expenditure would be permitted for such delegations without similar authorization, Vought added, though agencies “shall continue to provide appropriate logistical and security support.”

Rep. Elaine Luria, D-Va., one of the lawmakers who was set to accompany Pelosi on the Afghan trip, said in an interview that the delegation spoke about 6 a.m. Friday and decided to put off the four-day trip.

“I was dressed and ready to go, ready to walk out the door with my suitcase,” she said. “The removal of the use of transportation was the first step. The second was the disclosure of travel by commercial air. All protocols for safety, security were broken in the fact that all that information was made public.”

Luria, a 20-year Navy veteran, was the only freshman member invited a few weeks ago to join the senior leadership trip with Pelosi and five other lawmakers. Luria recalled that during her military service a senator from her home state of Alabama was part of a delegation visiting the USS Harry S. Truman aircraft carrier.

“It was meaningful to have lawmakers who are involved in the decision-making process come see with their own eyes how the operations were going and hear what the concerns were of the sailors,” Luria said. “It showed that lawmakers don’t just sit in Washington.”

Members of Congress routinely travel around the world as part of their congressional business; that travel is frequently done on military planes and arranged by State Department protocol officers.

Such trips are typically kept secret for security reasons until lawmakers are safely back in the United States.

Asked if she considered it retaliation as part of an ongoing tit-for-tat amid the shutdown, she said, “I would hope not. I don’t think the president would be that petty, do you?”

Pelosi spokesman Drew Hammill said earlier Friday that the trip to Afghanistan would be indefinitely postponed “so as not to further endanger our troops and security personnel or the other travelers on the flights.” But he said that lawmakers will not be cowed in discharging their constitutional duties.

“The United States Congress is a coequal branch of government in our system of checks and balances,” he said. “The Congress has a constitutional responsibility to conduct oversight in the war zone where our men and women in uniform are risking their lives every day.”

‘I was a terrible baseball player’: Rowan native Phil Kirk inducted into hall of fame in Goldsboro