SALISBURY — Phyllis Loflin-Kluttz’s office at Ellis Park has the feel of a sports museum or hall of fame.

It’s filled with medals, trophies, team photographs, sports equipment, sports attire and newspaper articles — all well displayed amid the desks for herself and assistant Savannah Daniel.

Not far behind Daniel are flip cards that have been counting down the days until Loflin-Kluttz retires. On this day, the cards have reached “00 20.” 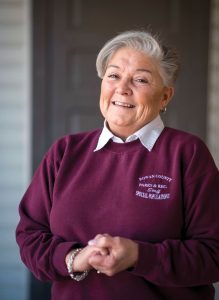 As the 20-year coordinator for the Salisbury-Rowan Senior Games & SilverArts — one of 53 such programs in the state — Loflin-Kluttz has made Rowan County’s biggest in North Carolina. It’s hard to judge, she says, but it also could be the biggest local program in the country.

Senior Games & SilverArts had 832 participants last year in 86 different events. Entering its 36th year of participation, Rowan County has produced its share of  state and national winners in Senior Games.

So how did Loflin-Kluttz do it?

There were thunderclaps of innovative thinking; lots of personal talks and appearances around the county; plenty of help from co-workers, volunteers and Rowan County government; and Loflin-Kluttz’s love and dedication to the senior population she was serving.

And, yes, she doesn’t give up easily.

“I’ve spent 20 years screaming, crying, biting and pushing,” Loflin-Kluttz says. “… I wouldn’t mess with me. I’m not what you would call a pushover.”

Loflin-Kluttz came into this Senior Games job well-equipped to deal with most any situation. She had been a single mother. She flew seven years with Continental Airlines as a flight attendant.

She worked airline reservations and for travel agencies. She was a tour director for corporate clients on cruise ships. She taught classes at a travel school and ran a travel business out of her home.

“When I took this job, I was very familiar with large groups,” she says.

Two decades ago, Loflin-Kluttz inherited a Senior Games program that had 68 participants and no money. And when the deadline passed for the first SilverArts competition — a celebration of seniors’ creative expression — no one had registered.

She and local artist Tomie Troxler eventually found 35 people to participate in Rowan’s first SilverArts in 1999. Today, more than 300 seniors show off their creative talents in heritage crafts and various arts.

“I love SilverArts,” says Loflin-Kluttz, who has been an entrant in the literary arts category herself. “All the stuff these guys do is just mind-blowing.”

Loflin-Kluttz also saw a key to growing Senior Games was providing team sports and nonsanctioned events — in other words, finding something for everyone, “because everybody doesn’t fit in one little box.”

Both tactics drove up participation.

“I always tell the county I actually have 30 employees,” Loflin-Kluttz says.

Elsewhere, her program holds a brand of Senior Games and SilverArts for residents of assisted living centers and nursing homes. It offers February trivia competitions at the county’s six meal sites for seniors.

Its bridge tournaments also are popular.

For seniors attending the SilverArts, Victory and Christmas dinners, there are accompanying mini-expos, where sponsors can promote their products and services.

“My generation has been the hardest to get involved, because we’re not seniors,” says Loflin-Kluttz, who will turn 65 in February.

She pauses a beat before adding, “but we are.”

Renita Ritchie, a retired therapeutic recreation supervisor for Rowan County and the person who hired Loflin-Kluttz, developed a deep friendship with her.

“She’s my sister from another mother,” Ritchie says.

Loflin-Kluttz is detail-oriented and meticulous, loves the seniors she works with, and has put her heart and soul into Senior Games, Ritchie says.

“She goes above and beyond for the whole program,” Ritchie adds. “She always has. It’s really outrageous what she did. She had the knack for knowing what seniors wanted and the ability to get it.”

For 10 years, Loflin-Kluttz worked part time as coordinator, and Ritchie says it was one of her greater accomplishments to see that the county made Loflin-Kluttz full time before she retired.

Likewise, Loflin-Kluttz says she would have retired much earlier than this year had the county not given her Daniel as an assistant three years ago.

“Savannah was the greatest thing the county ever gave me,” Loflin-Kluttz says. “It’s worth the investment of Savannah and myself to have a successful program.”

Don Bringle, director of the Rowan County Parks and Recreation Department, says Loflin-Kluttz will be greatly missed, especially her outgoing personality and spontaneity.

“She’s very affectionate and can relate to any age of our senior participants,” Bringle says. “She just does a wonderful job in that respect. … She just captivates the people around her. There’s never a dull moment with Phyllis.”

Loflin-Kluttz said the Senior Games coordinator’s job — Daniel will fill that position at her retirement — is all about organization, coordination and creating.

Of Senior Games’ popularity and participation in Rowan County, she says, “I always knew it could be like this, because the interest was there. There was no reason with all the baby boomers why this couldn’t explode — and it did.”

Loflin-Kluttz grew up in Rowan County. The daughter of Margaret and Ira Loflin, she had three older brothers.

Her father died in his early 50s, and Margaret Loflin went back to school, became a registered nurse and eventually retired from Salisbury’s VA hospital.

Lofin-Kluttz graduated in 1972 from North Rowan High School. She moved to Texas and worked as a flight attendant with Continental Airlines for seven years, flying within the United States and to destinations in Mexico and the Caribbean.

She had a son, Michael, and jobs in reservations and with various travel enterprises followed, taking her to Tidewater, Virginia, and Chattanooga, Tennessee, before she returned to Rowan County in 1992 to take care of her ailing mother.

She tired quickly of commuting to a job in Charlotte and became an employee of Norman and Betty Kesler’s travel agency in Salisbury. She married George Kluttz in 1995.

When Loflin-Kluttz took the part-time job as the Senior Games coordinator in 1998, she continued teaching at Lucas Travel School in Greensboro and doing Travel Elegance out of her home.

“My guys, my seniors — they’ve become family,” she says.

She believes Senior Games offers something for someone of every kind of ability, and she likes how the five-year increments in competition help in leveling the playing field.

“They do become so close,” she says of some of the participants’ friendships with each other, “because they have common interests.”

Loflin-Kluttz has so many stories from the Senior Games of courage, comedy and camaraderie that she hates to single anything out.

She remembers being taken aback at first at some of the smack talk among the older competitors.

“I just didn’t expect people my parents’ age to be doing that,” she says. “But it was all in fun and broke up some of the monotony.”

Loflin-Kluttz has seen senior competitors use the games to combat or come back from hypertension, diabetes, strokes and broken bones.

She describes the drive Frances Wells once showed when only days after seriously breaking her right hand in a fall on the track, she returned to the Senior Games to throw horseshoes with her nondominant left hand.

She laughs describing how the late Paul Dziezyc ran a sprint in his wingtip dress shoes and blew the field away.

Today, she lives with George in her family home place near Buck Steam Station. It was originally her great-grandmother’s house.

In February as one of her first acts in retirement, Loflin-Kluttz plans to join the YMCA through the Silver Sneakers program.

A self-described hacker, she also hopes to return to playing golf more regularly, and she definitely will be working in her flower garden this spring.

Don’t forget family: She has seven grandchildren and a great-granddaughter.

Also expect to see her competing in the 2019 Senior Games in events such as bocce, miniature golf, cornhole and shuffleboard, besides writing in the literary arts category.

Only this time, she will be able to compete and go home. Gone will be the 12- and 13-hour days of scoring and cajoling.

She’ll miss it, Phyllis says, but if you understand, she also won’t miss it. The time has come to move on when the flip cards say “00 00.”

“Our bodies get older,” Phyllis says, “but our minds and hearts are still very young.”