Blue Bears get big win over the Vikings 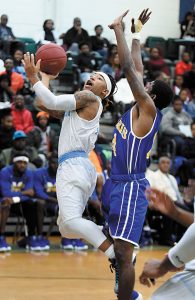 The victory snapped a three-game losing streak for coach James Stinson’s Blue Bears, now 7-5 overall and 1-3 in the conference. For the Vikings (8-8, 4-1), the loss ended their five-game winning streak.

Trailing, 57-55, with just under six minutes remaining, freshman guard O’Koye Parker drilled a 3-pointer — his only points of the game — lifting the Blue Bears into the lead with 5:41 remaining.

Ray led the Blue Bears on a 19-12 run down the stretch. Ray scored six points during the run, including a big 3-pointer, giving Livingstone a 63-57 lead with 2:55 left.

A minute later, 6-9 Lydell Elmore drained another 3-pointer to push the Livingstone advantage to nine points.

ECSU cut the deficit to five points at 72-67 with 11 seconds left, but guard Cameryn Carpenter, another freshman, and Ray sank free throws to seal the win.

Livingstone held a lead in the first half, before the Vikings went ahead at the 9:30-mark on a layup by Joseph Allen. ECSU’s first-half lead topped out at eight points (36-28), before the Blue Bears whittled things down to 42-37 by halftime.

The Vikings hurt themselves with 3-point shooting, making just 5-of-21 (24 percent).