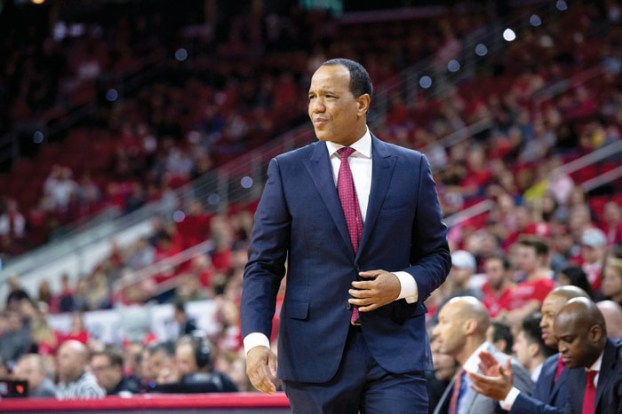 FILE - In this Dec. 28, 2018, file photo, North Carolina State head coach Kevin Keatts watches the action during the first half of an NCAA college basketball game against Loyola Maryland, in Raleigh, N.C. North Carolina State has thrived with a deep rotation. Keatts isn't hesitating to go 10 deep and the Wolfpack finds themselves ranked in the Top 25. (AP Photo/Ben McKeown, File)

RALEIGH (AP) — Kevin Keatts spent his first year at North Carolina State installing an aggressive pressure-based scheme. Now he’s got the numbers to run it how he likes: with a deep rotation that has the 15th-ranked Wolfpack thriving at the start of Atlantic Coast Conference play.

N.C. State is regularly going 10 deep, sometimes with complete five-player substitutions. It’s kept Wolfpack players fresh during games while allowing Keatts to tinker with lineups looking for the right combination or the hot hand. And it’s a key part of the program getting off to its best start in 45 years, not to mention carrying a Top 25 ranking for the first time in roughly six years.

“What’s happened is those guys have given me confidence in practice,” Keatts said Monday. “I think every coach in the country plays the guys they feel comfortable with. When you look at our 10 guys, I don’t think it’s a lot of separation from the five guys that I start and the five guys I bring off the bench.

“Each one of those guys have done something in practice that made me feel good about playing them in games.”

Rewind to the preseason — heck, even further to the start of his tenure in 2017 — and Keatts mentioned multiple times his goal of being able to play 10 or 11 players while still getting reliable production. It sounded more aspirational than probable at the time, particularly with so many new faces joining this year’s overhauled roster.

And yet, Keatts is regularly rolling out all 10 available scholarship players on his roster for at least 12.8 minutes per game entering Tuesday’s game against 12th-ranked rival North Carolina (11-3, 1-0 ACC). He sounds unlikely to change, too, even at a time when many coaches tighten up their rotations to keep their best players on the court for longer stretches during league games.

“It’s just because we’ve got a lot of guys who compete every day in practice,” redshirt senior Torin Dorn said. “I think a lot of guys come in, and they’re ready to play.”

Indeed. N.C. State (13-1, 1-0 ACC) is averaging 35.4 points off the bench during the program’s best start since the Wolfpack’s NCAA championship season of 1974. That includes a program-record 62 points from the reserves in a blowout win against USC Upstate on Dec. 22, followed by 45 bench points against Loyola (Maryland) about a week later.

The bench has also come up big in tougher games, namely when Utah transfer Devon Daniels — who has bounced between starter and reserve — scored all 15 of his points after halftime to help the Wolfpack upset then-No. 7 Auburn on Dec. 19.

And in a positive development for Keatts, the production has improved since the start of the season. N.C. State had a total of seven double-figure scorers off the bench in seven November games, including none in the Wolfpack’s lone loss at Wisconsin.

There have been 13 in the seven games since.

Beyond the box score, the deep rotation certainly gives Keatts a strong motivational tool: play hard, take care of oncourt assignments or he’ll sub in someone who can.

“I think all of us go into the game with the same mentality,” Daniels said, “play hard and give full effort, because we’re 10 deep.”