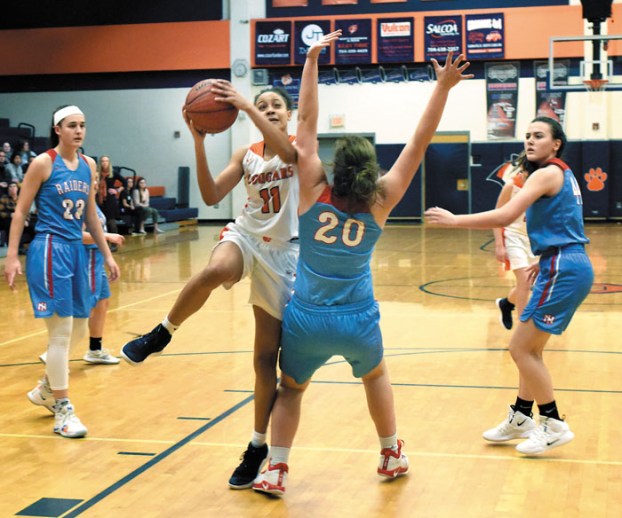 Cougars win a big one 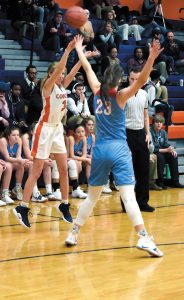 CHINA GROVE — It appears everything the Carson girls basketball team accomplished in November and December was not an illusion.

The still-unbeaten Cougars reassured us of that on Tuesday night, when they opened their NPC season with a brand-name victory over visiting North Iredell.

“This was a really tough team,” coach Brooke Stouder said after Carson’s eye-opening, 65-48 triumph. “But from top to bottom, this entire conference is tough. That means every game is going to be big like this one.”

It was a weighty outcome for Carson (15-0, 1-0), which dropped two conference decisions to North last season. It’s one game into a 10-game league schedule and half the circuit is looking up at the Cougars.

“It’s just like last year,” sophomore Colbie Perry said, after matching her career-high with 21 points. “We needed to come out and play well every possession.”

This time they were rewarded. Carson shot a pedestrian 18-for-46 from the field, but converted 12 3-pointers, including Perry’s five from behind the arc. The game’s momentum turned during a 14-0 scoring spree that bridged the first and second quarters and provided a 21-11 Carson edge.

“We weren’t trying to do anything special,” North coach Roger Bumgarner said, after the Raiders (10-2, 0-1) had their six-game winning streak snapped. “We were just playing a very good team tonight. They were well-prepared defensively, and offensively, they hit every 3-pointer they shot. It felt like that anyway.”

Carson’s defense forced 22 turnovers and limited North to seven field goals and 19 points in the first half.

“I don’t think it was easy,” Stouder said. “We had to fight tooth-and-nail for everything we got. Don’t let the final score deceive you. In the first half, our defense was solid — and we did everything we talked about doing, as far as closing out with the hands up contesting shots and keeping them from attacking the basket.”

North’s weapon-of-choice was 6-foot-2 senior Rachel Lalonde, an inside-outside threat who netted a team-best 17 points. Her only two points of the first half came on a pair of free throws that drew the Raiders within 21-15 midway through the second period.

“We weren’t really looking inside,” Lalonde beefed. “But when we did, their defense would take the ball away. We weren’t being strong with the ball.”

Carson used 3-balls by Perry and reserve guard Maci Cooper — followed by McKenzie Gadson’s steal and layup — to help build a 10-point halftime lead. And when Ellie Wilhelm, Perry and junior Taylor Conrad each connected from long distance within a 1:25 span, the Cougars owned an insurmountable 38-21 third-quarter lead. A minute later, Perry fired a pass that pierced North’s sneaker-to-sneaker press and found teammate Carleigh Perry for an uncontested layup.

“That was mostly driving and kicking and looking for the best shot,” Colbie Perry said. “I try to picture every shot I take going down.”

North — like Carson, a Christmas Tournament champion — was less fortunate.

“We’re a better team than what we showed,” Bumgarner said. “We were flat. We settled for outside shots way too much. Normally, we try to start inside and work our way out. Now, they played a great defensive game, but we were impatient.”

Carson’s widest margin was delivered by Wilhelm, who stuck a three from the left corner that made it 48-29 late in the third quarter. The Cougars sealed the deal by converting 14 consecutive free throws in the final period.

“We knew they were a good team and that we needed to come out with a lot of intensity,” said Gadson. “So we played solid defense, closed out hard and kept them in front of us. It’s a great feeling to beat them, even though it’s just our first conference game. Now we’ve got to keep it up.”

NOTES: Wilhelm finished with 11 points and Gadson with 10 points and five deflections. … Carson went 17-for-20 from the free throw line. … The game was halted for a few minutes with 2:36 remaining when a stray bat entered the gym and disrupted play and the safety of spectators. Dale Peeler of China Grove eventually knocked it to the ground with a broom and a Carson custodian secured it in a net. … Carson improved to 7-0 at home. It hosts East Rowan on Friday.