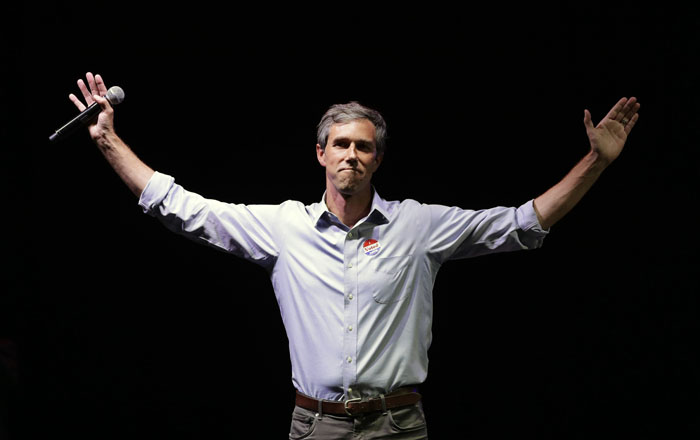 As the new year turns and Democrats focus on candidates to oppose President Donald Trump in 2020, there’s one number they should keep in mind: 47.

Here’s why. Since the end of World War II, Democrats have elected only four presidents who did not hold the office already: John F. Kennedy in 1960, Jimmy Carter in 1976, Bill Clinton in 1992 and Barack Obama in 2008.

Those four successful Democrats share many traits, but one of the most striking is their age on the day they were elected. They range from Kennedy, 43, to Carter, 52, but their average was — yes — 47. In fact, that was Obama’s exact age when he defeated 72-year-old John McCain.

Of course, age is a very rough metric, but looking at the emerging field of Democratic aspirants, one impression is unmistakable. The potential candidate who best fits the profile of Democratic winners is Beto O’Rourke, the three-time congressman from El Paso, Texas, who narrowly lost a Senate race in November. On Election Day 2020, he will be 48.

It’s still 14 months before the Iowa caucuses, so polls are minimally instructive. But it’s worth noting that the first survey of potential caucus-goers put O’Rourke in third place behind two much better-known (and much older) possibilities: former Vice President Joe Biden, who will be almost 78 in November 2020, and Sen. Bernie Sanders, who will be 79.

Fourth-place Sen. Elizabeth Warren, who has announced an official exploratory committee, will be 71.

A closer look at the four victorious postwar Democrats shows that their age was really a symbol for a much larger issue. Their youth helped shape their narratives, the stories they told voters about their past experiences and their plans for the future. In all four cases, those future presidents captured something profoundly important about America, about our eternal search for something new and fresh and different.

They embodied perhaps the best slogan in our entire political history: “It’s time for a change!” (So did Trump, even though he was 70 in 2016.)

Kennedy spearheaded the wave of returning World War II veterans who entered politics and assumed the leadership of the country. The words in his inaugural address — “A torch has been passed to a new generation of Americans” — stand as the quintessential expression of the nation’s embrace of youthful energy and optimism.

Carter was not a harbinger of a new generation, but as a naval officer turned peanut farmer, and then as a governor who had never served in the Capitol, he represented a clean break from the “swamp” of post-Watergate Washington. His brilliant slogan — “I will never lie to you” — echoed Kennedy’s promise of a new national beginning, a clean start.

Clinton was the first baby boomer president who talked about “building a bridge to the 21st century” and played on the name of his hometown in Arkansas when he told the Democratic convention in 1992, “I still believe in a place called Hope.” He reflected the bright line of optimism that connects successful candidates when he picked a campaign theme song with an insistent refrain, “Don’t Stop Thinking About Tomorrow.”

Thirteen years before he was elected president, Barack Obama published a bestselling memoir, “Dreams From My Father,” which told a new version of an old American story: a biracial child overcoming adversity and achieving success through his own merit and motivation. The book foreshadowed his timeless campaign theme of “Hope and change,” two of the most resonant words in the American political lexicon.

Obama has met with O’Rourke since the election, and in an interview with his close adviser David Axelrod, the former president praised the defeated congressman as an “impressive young man who ran a terrific race in Texas.”

Obama even drew parallels between himself and O’Rourke. He won in 2008, Obama told Axelrod, because “people had a sense that I said what I meant,” and he discerned the same attempt to level with voters in the Texan’s failed campaign: “What I liked most about his race was that it didn’t feel constantly poll-tested.”

Two New York Times political writers see another parallel between the two men. “Like Mr. Obama as he entered the 2008 campaign,” wrote Matt Flegenheimer and Jonathan Martin, “Mr. O’Rourke can be difficult to place on an ideological spectrum, allowing supporters to project their own politics onto a messaging palette of national unity and common ground.”

This is all very premature. O’Rourke might not even run for president. But if he does, remember the magic number is 47.