‘It sounded like a bomb’: Tractor-trailer leaves trail of destruction in Aldi’s parking lot, to store itself

A second wreck occurred at the corner of Brenner Avenue and Jake Alexander Boulevard just after 2 p.m. Friday.

The wreck involved a tan Toyota and silver Hyundai. The driver of the Toyota was not wearing his seatbelt and was partially ejected from the passenger side of his vehicle.

The driver of the Hyundai is suspected to have suffered pelvic injuries. She collapsed beside her car. 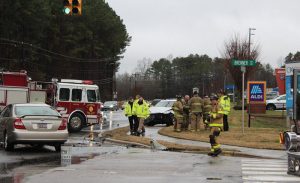 Andie Foley/Salisbury Post Two vehicles were involved in an accident at the scene of another accident on Jake Alexander Boulevard near Aldi, shortly after the first accident, which sent a car into the grocery store.

Both were transported by ambulance to the hospital. There were no passengers in either vehicle.

SALISBURY — A tractor-trailer left busy Jake Alexander Boulevard on Friday afternoon, veered into the Aldi parking lot and hit at least seven vehicles, including one it pushed into the side of the grocery store.

“It sounded like a bomb to me,” said Sarah Lipscomb, who had just checked out her groceries and was putting them into bags. “Everybody was looking, not knowing what was going on.”

Brian Hancock, a pastor, also described the first sound of a car hitting the building as a bomb going off.

“It was coming from sort of the back of the store,” Hancock said. “You watch the wall as it just bends. It was really eerie.”

Hancock said it was just a second or two — that initial sound — “but it felt like forever.”

Hancock said the noise didn’t dissipate and described the destruction happening outside as “a constant loudness.” The customers inside soon saw the 18-wheeler hitting concrete poles near the entrance, then plowing into the front parking lot.

“It was a very scary experience,” Hancock said. “Brother, it was something I don’t want to relive.”

It was traveling east on Jake Alexander Boulevard on the opposite side from Aldi’s when it crossed the road near Premier Federal Credit Union, headed up an embankment and took out some small trees at the credit union parking lot.

The tractor-trailer continued into the Aldi’s parking lot, first hitting a Nissan SUV and pushing it into the side of the building toward the bread aisle inside. It then struck a GMC Denali before heading to the front parking lot, where it hit five more parked cars.

The wayward truck came to a stop when it wedged a vehicle between its heavily damaged front cab and a light pole.

No injuries were reported. The accident closed the store for the rest of Friday. Bystanders described the parking lot as looking like a war zone or as though a tank had rumbled through.

“I’m just shook up,” Lipscomb said afterward. “Everybody started running, then someone said somebody took the side of the store off.”

Lipscomb had parked in a spot near the front of the store.

“If I had been parked on that side,” she said, motioning toward where much of the store damage was, “my car would have been completely torn up.”

The rear end of the Nissan was pushed into the store.

Hancock said he had parked near the Nissan and his car just missed being hit. He said he is thankful for divine intervention preventing anyone from being hurt.

Hancock took a personal video of the destruction after the accident and it soon went viral.

The accident happened early in the afternoon. Lipscomb said she had left work at lunchtime and stopped at the grocery store on her way home.

Hancock, a pastor at Neel Road Baptist Church, said he was on his regular shopping trip to Aldi. “It’s my normal routine. Every two weeks, I go to Aldi’s and stock up,” he said.

The Salisbury Police Department is investigating the accident.

SALISBURY — The winter issue of  Salisbury the Magazine, a publication of the Salisbury Post, reached subscribers in December and... read more