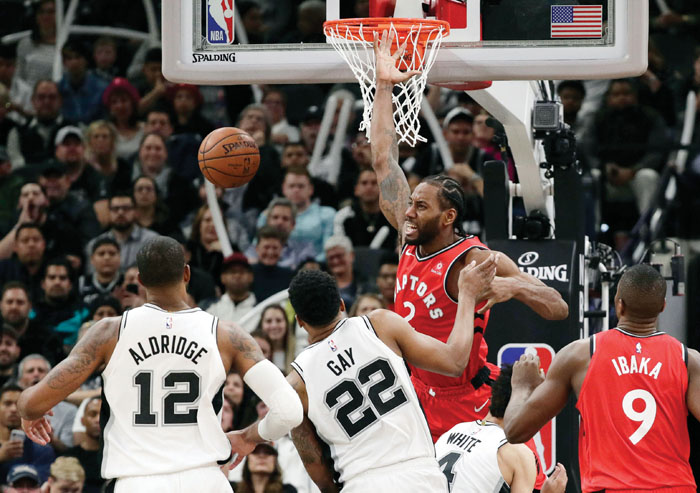 Toronto Raptors forward Kawhi Leonard (2) reacts as he loses control of the ball while trying to score against the San Antonio Spurs during the second half of an NBA basketball game Thursday, Jan. 3, 2019, in San Antonio. (AP Photo/Eric Gay)

SAN ANTONIO (AP) — DeMar DeRozan had his first career triple-double with 21 points, 14 rebounds and 11 assists and the San Antonio Spurs welcomed back Kawhi Leonard with thunderous jeers in a 125-107 victory over the Toronto Raptors on Thursday night.

Leonard scored 21 points on 8-for-13 shooting, but the anger the Spurs’ fans showered on him seemed to impact the MVP candidate. Leonard had to take a step back at the free throw line and compose himself amid chants of “Traitor! Traitor!” and “Quitter! Quitter!” from the capacity crowd that adored him during his seven seasons in San Antonio.

Leonard forced his way out of San Antonio in a trade that yielded DeRozan and Jakob Poeltl from Toronto for Leonard and Danny Green.

Leonard was booed heavily from the moment he walked onto the court for warmup. The boos continued during a pregame video tribute and player introductions, whenever he touched the ball and as he walked off the court following the lopsided loss.

DeRozan and the Spurs dominated the battle of former teammates, leading by as many as 28 points in snapping the Raptors’ three-game winning streak.

The night belonged to DeRozan, though as he became the first San Antonio player with a triple-double at home since Tim Duncan in 2003.

The crowd erupted during a sequence of plays when Leonard had the ball tipped away, which led to a slam dunk by White. That possession was followed by Leonard being unable to corral an alley-oop pass, which led to DeRozan tossing in a runner and being fouled by Serge Ibaka. DeRozan made the free throw amid chants of “MVP! MVP!” — something Leonard heard during his time in San Antonio.

As the game ended, Gregg Popovich and Leonard embraced in a long hug and the Spurs coach led his former star to San Antonio’s bench to greet assistant coach Ettore Messina.

Raptors: The Spurs played a tribute video for Leonard and Green prior to the game that ended with “Thank you Danny and Kawhi.” Green ran over to and hugged Popovich prior to tipoff. … Lowry missed his fourth straight game due to lower back pain. The Raptors lost for the first time in that stretch.

Spurs: DeRozan is the first Spurs player to have at least 15 points 10 rebounds and five assists in a half since Tim Duncan in 2007. DeRozan also recorded his first double-double in a half. … Gay played 23 minutes to Popovich’s surprise, who thought the 13-year veteran would miss the game with a sprained left wrist.

Raptors: At Milwaukee on Saturday night.

CLEVELAND (AP) — Kevin Love might be a little closer to helping the needy Cavaliers.

The All-Star forward was cleared to begin “select basketball activities” following left foot surgery, but there is still no clear timetable when he’ll play again for the NBA’s worst team.

Love played in just four games before having surgery on Nov. 2 to repair an injury sustained during Cleveland’s exhibition opener. He had cartilage removed and fluid drained from the base of his large toe — an injury that made it difficult to walk.

The team said Love visited Dr. Martin O’Malley at the Hospital for Special Surgery in New York on Wednesday. The evaluation revealed that Love’s foot is healing and he can begin some on-court activities under the direction of the team’s medical staff.

But it’s still not known when he’ll return to Cleveland’s lineup, and while he’s sidelined, Love continues to be mentioned in trade rumors in advance of February’s deadline.

Love signed a four-year, $120 million contract extension last summer when the Cavs lost LeBron James and headed into a season in which the club thought it could rebuild and contend.

But a horrific start led to the firing of coach Tyronn Lue and the Cavs are just 8-30 entering Friday’s home matchup against Utah.

It’s been a struggle without Love.

“He’s been gone all year,” coach Larry Drew said. “We haven’t had him all year. Kevin is, let’s face it, he’s our main guy. He’s our go-to guy. He’s the guy we’re going to put the ball in his hands at the end of the game. He does so much because he has that, being a guy his size he can step up to the 3-point line. You can post him. He gets to the foul line.

“Getting him back, it will be a great welcome. Hopefully it will be sooner than later.”

Love has averaged 17.2 points and 10.0 rebounds with the Cavs, who could be tempted to move him in a deal.

Drew said it’s natural for Love’s name to be attached to trade talk this time of year.

“I understand the nature of this business. Anybody can be traded,” he said. “I’ve been in this league long enough where I’ve seen that happen. I think any deal that makes sense for any team — sure, they’ll be willing to pull the trigger. But that’s just the nature of our business. Around this time is always an exciting time because you start hearing names floating around, all the possibilities and the probables and the ‘what ifs’ and 99 percent of the time none of it happens.”