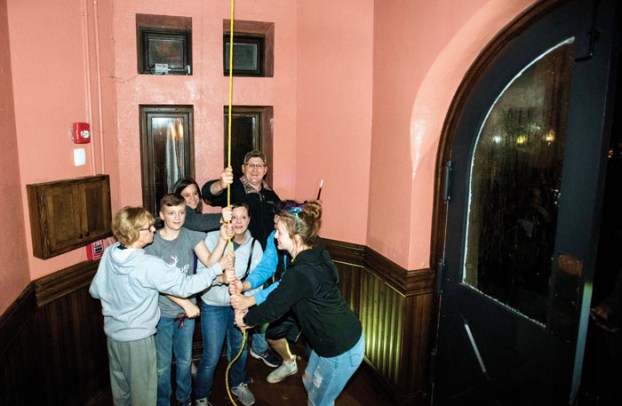 Members of the Shideler, Stills and Tripps families ring the bell in the historic Bell Tower to celebrate the new year. Jon C. Lakey/Salisbury Post

Laurel to Salisbury personality Clyde and the small group of folks who gathered at the Bell Tower and kept a local tradition alive on New Year’s Eve. For decades, the Bell Tower has been a gathering site at which Salsburians ring in the new year. Clyde and Barbara Jackson traveled to the site with leftover candles from a Hall House celebration in the mid-1970s and, in turn, created a Salisbury tradition. This year’s celebration is particularly noteworthy because city government announced online Tuesday that weather would force the cancellation of an official event at the Bell Tower. Soggy soil and that continued precipitation would make lights, a live projection of the countdown from Times Square and music unachievable. But, as the saying goes, the show must go on. “The Bell Tower is still going to be there. It’s still going to be New Year’s. You can’t cancel that,” Clyde said.

Laurel to the Rowan County Sheriff’s Office, which recently charged a man in connection with the theft of a trailer full of equipment owned by a China Grove Cub Scout pack. While Jeremy Steven Shaver, of Albemarle, remains innocent until proven guilty, the crime in which he is charged is shameful. Shaver is charged with stealing a trailer that was parked in a church parking lot, and the trailer belonged to an organization — the Cub Scouts — that seeks to teach boys life lessons,  provide opportunities to explore the outdoors and build character.  In addition to finding a suspect, the Sheriff’s Office was able to recover several of the items stolen. As Cubmaster Kevin Fuller told the Salisbury Post, sometimes law enforcement is unable to return the items or charge a suspect in thefts, but we were glad to see that this was not one of those times.

Dart to ruthless partisan politics, which have taken over the fallout from allegations of election fraud in the 9th Congressional District race. Complications about a change in the makeup of the N.C. Board of Elections — investigating improprieties in the 9th District race — has been the culprit of the latest back-and-forth, with Gov. Roy Cooper saying Republicans are blocking action in the investigation by not putting forth nominees and the state GOP chairman saying Republicans aren’t putting forth nominees because Cooper is seeking to create an “unlawful, interim State Board of Elections.” With North Carolina’s political history, the latest political bickering comes as no surprise, but Republicans and Democrats and North Carolina collaborate to ensure a fair, thorough investigation instead of what’s occurring now.

I suggest that we consider vocational education for the high schools and expand it to the community. We are a... read more