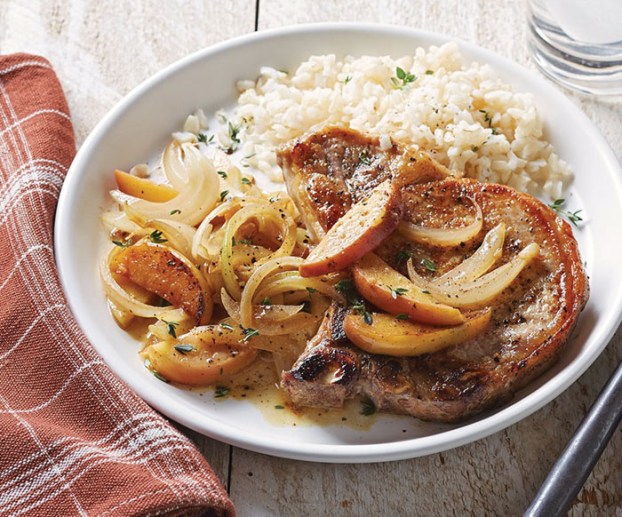 Diabetic Living Pork Chops with Apples and Onions is simple and good for you. The contrast of sweet and savory is deal for pork.

Start your year out with the versatile pork chop 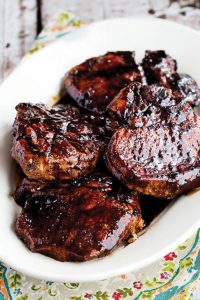 KailynsKitchen.com Balsamic Glazed Pork Chops are easy and bring a new taste to the table.

Yes, 2019 is the year of the pig, according to the Chinese Zodiac.

In Chinese culture, pigs are a symbol of wealth. It is the twelfth of the Chinese Zodiac animals, because it was last to the Jade Emperor’s dinner. The story goes that the pig overslept, or that a wolf destroyed his house and he had to rebuild it before he could go to dinner.

People born under the sign of the pig are realistic. They do enjoy life, though, and enjoy entertainment. They work hard and like to have things to hold on to.

Now, because this year of the pig falls in the earth element, they are social butterflies. They get along with all sorts of people and have a lot of support in work and life. They are not very romantic, but they are successful in later life.

But before we go any further, let’s consider the other pig — the other white meat.

Starting the year off with pig is a sign of good luck and wealth in the year to come. You’ve probably already planned your pork, greens, peas and cornbread meal for the day, but let’s look at how versatile the pork chop is.

Think of it almost as you do a chicken breast or thigh. Chops cook quickly and can take on any sort of flavor enhancement. Go simple with a little Dijon mustard and white wine, or make it fit for company with a delicious glaze using apples and honey.

Below are some ideas to kick off your year of the pig — in the kitchen.

Balsamic glaze can make just about anything taste better. It can go on everything from strawberries to these easy pork chops.

Trim fat from chops and season with salt, pepper and other seasonings.

Using a cast iron skillet, if you have one, or a heavy bottomed skillet, heat the pan one minute, add the olive oil, heat one minute more and add pork chops. Cook over medium high heat until well browned on both sides and cooked through, about 5-6 minutes, depending on the thickness of the chop. Remove chops to a plate, lower the heat and add vinegar and sugar and cook until slightly thickened, about 2 minutes. Put chops back in pan, along with any accumulated juices and cook another 4 minutes, until well glazed.

Editor’s note: Don’t buy expensive balsamic vinegar for this, since you are reducing it to a glaze. If you prefer another sweetener, such as honey, you can use that.

Heat 2 Tbsp. butter in a large skillet. Sauté mushrooms until they begin to brown, about 5 minutes. Remove mushrooms and set aside.

Place chops in baking dish and spread mushrooms over the top. In the same skillet, add wine and stock, scraping up all the browned bits from the bottom; season with salt and pepper. Bring to a boil, then reduce heat and simmer for 10 minutes.

Pour the wine/stock mixture over the chops and mushrooms in the pan. Mix shredded mozzarella with green onions and spread over the top. Bake for 15-20 minutes, until cheese is melted.

Sprinkle chops with salt and pepper. Coat a 12-inch skillet with cooking spray and heat over medium high heat. Add chops; cook 4-5 minutes or until browned on both sides. Remove from skillet; keep warm.

In skillet, combine apples, onion and garlic. Cook over medium-high heat 6-8 minutes or until apples are golden, stirring occasionally. Carefully add wine and cook 1-2 minutes, stirring to scrape up brown bits. Stir in broth, mustard and butter. Return chops to skillet and simmer, covered, 4-6 minutes or until an inserted thermometer reads 145 degrees.

Serve chops with rice and sprinkle all with fresh thyme, apples and onions

In a shallow dish or plate, combine the parmesan, panko, garlic powder and black pepper.

Place pork chops on the open side of the baking sheet. Brush the top of the chops with 1 Tbsp. of olive oil. Spoon half the parmesan mixture evenly over the pork chops. Lightly press the parmesan into the chops. Bake for 25 minutes.

Trim the tough woody ends off the asparagus. Add to the baking sheet and drizzle with 1 Tbsp. olive oil. Sprinkle the remaining parmesan mixture over the potatoes and asparagus. Cook for 20 minutes.

Tasters commenting on the web site have changed around the veggies in the pan.

Some have used green beans in place of the asparagus, or baby carrots — though that might take longer to cook.

Butternut squash could be substituted for the potatoes. Or use cauliflower on one side and broccoli on the other.

David Diggs: A craftsman with a big heart