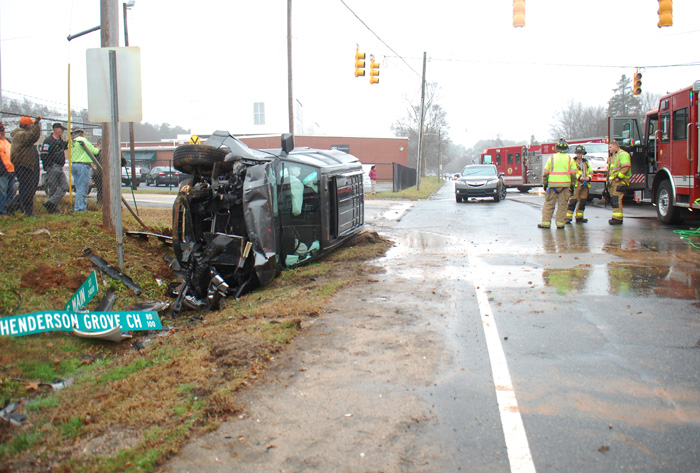 A four-vehicle crash at the corner of Henderson Grove Church Road and South Main Street, not far from the Forum Fitness, left a driver of this Ford Expedition temporarily trapped inside the vehicle. The passengers in the other three vehicles were able to get out. No serious injuries were reported. Shavonne Walker/Salisbury Post

SALISBURY — A driver was temporarily pinned in her vehicle Monday after she reached for her cellphone and caused a four-vehicle crash, police said.

The crash occurred at the intersection of Henderson Grove Church Road and South Main Street, not far from the Forum Fitness Center.

Some passengers complained of minor injuries, police said, but no one was taken to the hospital. Two people said they would go to the hospital if back and wrist soreness continued.

Police said the driver was traveling on South Main Street in a Ford Expedition when she reached for her cellphone. When she looked back up, she had crashed into the back of a white Toyota Scion.

The driver of the Toyota hit a gray Acura that then veered into a nearby lane and struck a Toyota passenger vehicle.

The Ford Expedition veered around all the vehicles, hit a ditch and overturned on its side. The driver was pinned in but was uninjured, police said.

The names of those involved were not available Monday afternoon.