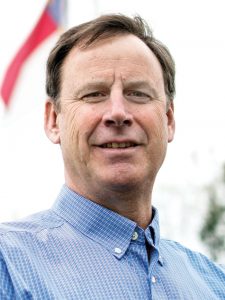 For state Sen. Dan Barrett, R-34, the journey from serving as Davie County commissioner to becoming one of Rowan County’s state senators was taken step by step.

Literally step by step in the beginning: Barrett launched his forays into state office with a trek across North Carolina on his quest for the Republican gubernatorial nomination in 2004.

It would be 13 more years before Barrett successfully made the jump from local to state politics. In August 2017, he was appointed to North Carolina’s Senate in District 34 to fill a vacancy left by resigning Sen. Andrew Brock.

Just 17 months later, he’s making the journey home following a double-bunked primary for the newly drawn Senate District 31. The Post spoke to the senator recently about his time in office. Here’s what he had to say:

Q: What do you think is the most memorable moment you’ve had in the General Assembly?

A: “One I will cherish is the opportunity to speak on the floor of the Senate on behalf of a school safety bill I helped with. The bill originated from a constituent’s idea and was improved and strengthened through collaborative work with fellow senators and interested citizens. Nonetheless, we had to overcome many obstacles to get the bill through various committees and onto the floor for a vote. Ironically, when the bill finally reached the full Senate, it passed unanimously.”

Q: If you could change one thing about the General Assembly, what would it be?

A: “An area for improvement would be to make sure legislation has been looked at from all angles and interested stakeholders have had a chance to give their input before a bill comes up for a vote. Citizens need to know about and have the opportunity to give their input on legislation while it is still being considered in committee. Absent such input, there is the risk that legislators are not aware of some unintended consequence of a bill, or of an opportunity to improve it, until it is too late.

“Another thing I would like to see is to eliminate or minimize ‘omnibus’ legislation. Many times, bills are drafted to address a legitimate concern, and then unrelated provisions are added in as the bill winds its way through the legislature. Occasionally this improves the bill, but many times it does not. Too often, a vote has to be based on deciding whether the good provisions in a bill outweigh the bad, or vice versa. Voting each issue up or down on its own merits is the better approach, in my view.”

Q: What will you miss the most about being in the General Assembly?

A: “The opportunity to represent the citizens of my district and state. Whether working on public policy or helping constituents resolve issues with state bureaucracy, it has been an incredibly fulfilling and rewarding experience.”

Q: What do you think will be the first thing you do once you’re out of office? Do you have any plans to run for public office in the future?

A: “My plans now are to spend more time with my family and catch up at home. I hope I can continue to be involved in public service in some manner.”

In 20 years, North Carolina governors have vetoed 63 pieces of legislation. Just over 60 percent of those vetoes were... read more