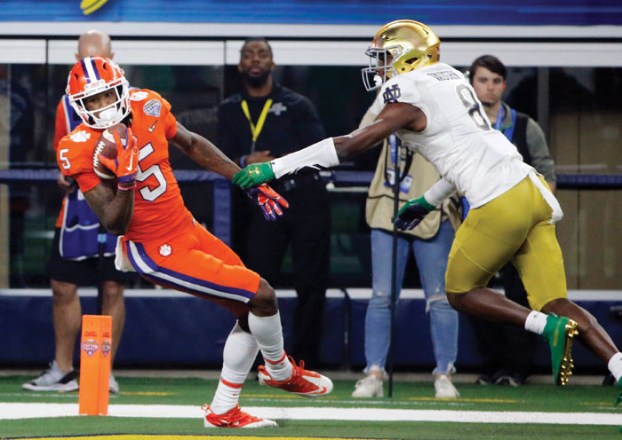 Clemson wide receiver Tee Higgins (5) comes down with control of the ball that was tipped by Notre Dame cornerback Donte Vaughn (8) in the end zone for a touchdown late in the first half of the NCAA Cotton Bowl semi-final playoff football game, Saturday, Dec. 29, 2018, in Arlington, Texas. (AP Photo/Michael Ainsworth) 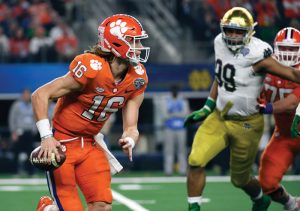 Clemson quarterback Trevor Lawrence (16) is pressured out of the pocket in the second half of the NCAA Cotton Bowl semi-final playoff football game against Notre Dame on Saturday, Dec. 29, 2018, in Arlington, Texas. (AP Photo/Jeffrey McWhorter)

ARLINGTON, Texas (AP) — When Clemson’s Dabo Swinney entrusted a team with championship aspirations to freshman quarterback Trevor Lawrence in September, this is what the Tigers’ coach had in mind.

Lawrence threw for 327 yards and three touchdowns and No. 2 Clemson beat No. 3 Notre Dame 30-3 on Saturday in the Cotton Bowl to reach the College Football Playoff title game. The Tigers (14-0) will play either No. 1 Alabama — for a fourth straight season in the playoff — or No. 4 Oklahoma on Jan. 7 in Santa Clara, California.

“He’s just so poised. He just sees it. And he’s got a gift of an arm,” Swinney said. “But I just love his humility and how consistent he is with his preparation, day in and day out. Easy, easy guy to coach. Easy guy to get behind and support. His teammates love him.”

On offense, freshmen led the way. Lawrence, making his 10th career start, was 27 for 39 and did not throw an interception against a Notre Dame defense that had been one of the best on the country. Freshman receiver Justyn Ross had six catches for 148 yards and two long touchdowns.

“It makes it a lot easier on me when you just have guys all around you who are such great players and take that load off of you. There’s not much pressure when you have guys this good playing around you,” Lawrence said.

The Irish hung around for a quarter, with the teams exchanging field goals. But in the first quarter, Notre Dame All-America cornerback Julian Love went out with what coach Brian Kelly said after the game was a head injury and Lawrence started taking apart the Irish.

Lawrence hooked up with Ross deep down the sideline and the big receiver beat Love’s backup, Donte Vaughn, for a tackle-breaking, 52-yard score early in the second quarter. The Irish looked as if they might keep it close to halftime, but they couldn’t keep Clemson out of their backfield — even without suspended star tackle Dexter Lawrence.

In the final 2 minutes, Trevor Lawrence connected with Ross on a 42-yard score and with Tee Higgins for a one-handed, 19-yard touchdown reception — again over Vaughn — with 2 seconds left in the second quarter. Lawrence was 13 for 15 for 229 yards in the quarter.

“I wanted to help our team,” said Love, who passed concussion protocol at halftime and returned to the game. “And in a sense, I let them down in that regard.”

That made it 23-3 at half and once again the Fighting Irish looked outclassed against the best of the best. Not so different from the 42-14 loss to Alabama in the 2012 BCS championship game or the 44-28 loss to Ohio State in the 2016 Fiesta Bowl. In fact, Notre Dame is 0-8 in BCS and New Year’s Six games since winning the Cotton Bowl in 1993.

“I thought we played just as athletic as them and just as fast as them and it came down to execution and we didn’t execute today,” he said.

Though to be fair, Clemson has been doing this to everyone since Lawrence settled in. The Tigers haven’t had an opponent stay within 20 points since a close call against Syracuse on Sept. 29.

That was Lawrence’s first game as a starter, one he didn’t finish because of a head injury, and Clemson’s first after quarterback Kelly Bryant left the team.

Bryant, a senior, led the Tigers to the playoff last season and a semifinal loss to Alabama. He was pivotal in an early victory this season at Texas A&M. But Lawrence is a rare talent, a potential first overall NFL draft pick. When Lawrence took over, the ceiling on Clemson’s potential rose. Now it is being realized.

“I felt like he gave us the best chance to win and play at an explosive level,” Swinney said.

With his flowing blond hair, Lawrence is positioned to become one of college football’s biggest and most recognizable stars. It will help to have receivers such as Ross, Higgins and Amari Rogers, all underclassmen. And a runner like sophomore Travis Etienne, who broke a 62-yard touchdown run in the third quarter.

But Lawrence is the leader. In his 11th start, he will try to become the first true freshman quarterback to lead his team to a national championship since Oklahoma’s Jamelle Holieway in 1985.

Notre Dame: As 12-point underdogs, the Irish needed to play their best and catch a couple breaks. Neither happened. They nearly had a takeaway deep in Clemson territory in the first quarter, but a loose ball was ruled barely out of bounds by replay review. Love’s injury left them exposed at corner. And an offensive line, which had been up and down and shifting around much of the season, was no match for Clemson.

Clemson: Dexter Lawrence, sidelined by a failed NCAA test for performance-enhancing drugs, was hardly missed. The 340-pound junior was on the sideline, wearing on an orange sweat shirt with a white tiger paw logo. Clemson is working on an appeal for Lawrence and two other players, but it is unlikely the Tigers will have them back for the national title game.

By STEVEN WINE, AP Sports Writer MIAMI GARDENS, Fla. (AP) — This season’s Alabama juggernaut has yet to be stopped, and... read more